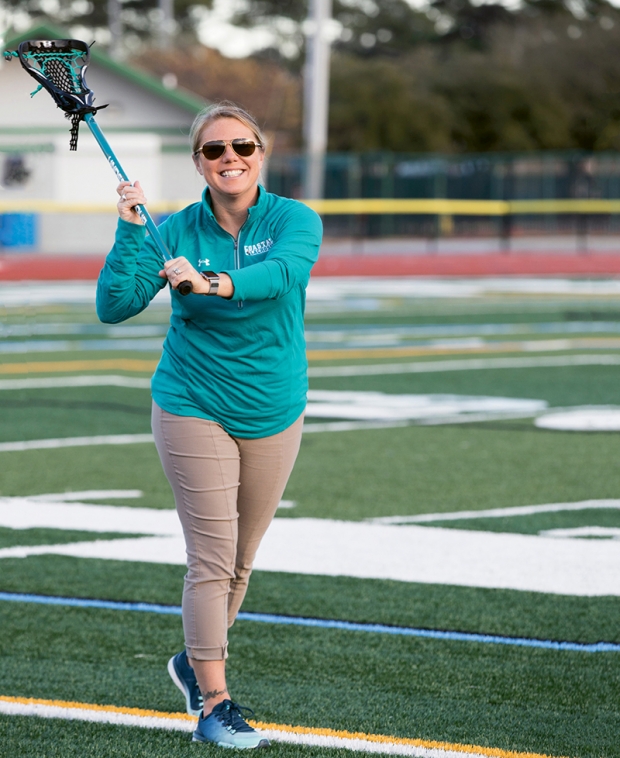 The Coastal Carolina University women’s lacrosse team was only three years old and looking to bring in an experienced coach to get them to the next level with a winning season. What happened next has made an immediate positive impact on women’s lacrosse at CCU and is planting seeds for generations to come.

Kristen Selvage accepted the head coaching job in August 2015 and moved to the Grand Strand from Pennsylvania with her husband, Matt, and daughters, Maddisen and Lillian. Selvage had built an impressive resume and had gained national attention as a winning coach with a positive attitude. As the head coach at Loch Haven University in Pennsylvania, she won 200 games, five conference championships and was coach of the year in 2015—all without a single scholarship.

Since coming to CCU two years ago, the team has managed a record of 24 wins and 13 losses. In just her second season, the team won the regular season, the conference championship and was one goal away from playing in the national championship.

“In the first three years the program was built with a team of solid athletes. Now we’ve added two good recruiting years and a strong fall season, so the team is looking forward to a successful year,” says Selvage.

Having reached her goal of a conference title in only her second year, Selvage now wants to get CCU into its first appearance in the NCAA tournament and crack the top 20 in the national rankings. She employs a simple coaching strategy that she credits to her coaches in high school and college—inspire creativity and desire through trust and positive reinforcement, not intimidation or fear of failing. She is grateful for the “ton of support from the university, great assistants, trainers and facilities.”

Selvage has also been working to grow the game locally with Palmetto Power—a new traveling club team for middle and high schoolers to learn the game and improve skills.

The first home game of the spring season for CCU is on March 13 against Winthrop at Brooks Stadium. Selvage says she has a strong, talented team for the new year, and if history is an indicator, this will be a fun team to watch.