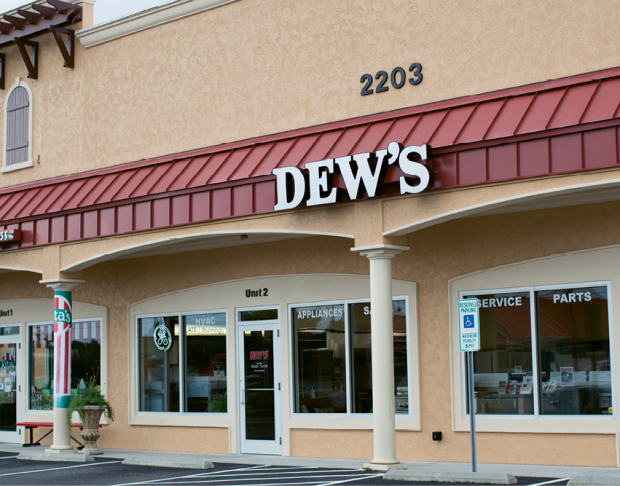 In her office—tucked as it is in the back of Dew’s, the family-owned appliance and HVAC business in North Myrtle Beach—Teressa Dew takes the time to reflect, alongside her business partner and younger brother, Linley, on the company’s resilient 70 years.

Though it sounds like your standard company slogan, her warm and affable voice—in all its Southern charm—exemplifies an authenticity that is, well, the company’s authentic and warm Southern charm.

And meanwhile, in the front of the store, customers peruse the stacks of refrigerators and AC units and dishwashers and microwaves and oven ranges—a nearly remarkable sight in this age of the big box store. Only three miles to the north is Home Depot, and Lowe’s is nearly a half-mile closer.

“The box stores came in the late ’80s,” Linley Dew recalls. “And what that did to the cash customer was…”

But the distinction, she explains, is that “We offer something different. We offer service after that sale in a world where a lot of people don’t. We’re also very transparent about our pricing, free delivery in our delivery area, and most installations are free.”

Linley adds, “We are more empathetic with our customer base and with our employees.”

“Our employees,” Teressa Dew says, “are our extended family.”

The siblings converse this way, in typical sibling fashion—completing each other’s thoughts, debating the finer points in a kind of verbal ping-pong. Such is the effect, one imagines, of working so long together in a family business, which is really the only business they’ve ever known.

Their father, James Dew, came down in 1950 to what was then only Ocean Drive to help run the store with his brother. Eventually, James Dew bought out his brother, Duncan, and the store on Main Street—originally a lumberyard and building supply company—evolved it into hardware sales, then appliance sales and service. James Dew continued to work at the store into his 90s and helped the company transition into HVAC sales in 2003. In 2013, the company moved to its current location on U.S. 17 and scaled back its hardware sales.

To reflect on that history, for Teressa and Linley Dew, is, in some ways, to memorialize an older North Myrtle Beach, when the store was a centerpiece of the entire community.

Teressa Dew remembers being a little girl in the 1950s, when she would travel with her mother, Mabel, to the bank and grocery store in Conway. Her mother would withdraw $5,000 in cash for the payroll and to help employees during the winter off-season. Teressa Dew laughs while remembering counter checks.

“You’d come in and buy something, and you’d come in with a counter check of the bank you banked with, and you’d write the check and they would honor it!” she says. “This was a kinder, gentler America. A more trusting America.”

“When you go back to when we were growing up, the fact is, after Labor Day, everything got rolled up, and it didn’t get kicked back up until Memorial Day, with maybe a spike at Easter,” Linley Dew says.

“People had to get through the winter,” Teressa Dew says. “We had good summers, so Daddy was able to help a lot of people out. Daddy would never turn anyone down for credit. I wish I had all the money he loaned to people he never got back!”

No story perhaps best embodies that spirit of trustworthiness and charity like the time Linley Dew got a call from a customer on Christmas Eve.

He recalls: “One of our customers, Mark—we don’t use last names—he called me up at home one Christmas Eve and asked me if I could open up the hardware store for him so he could shop for his family. I said, ‘Sure, Mark. I’ll meet you down there.’ I cut the lights on, opened up the store, and he picked up things for his family and charged it to his account. He was able to do Christmas for some of his family members.”

Such a community-based ethos also helped attract perhaps the most famous customer in Dew’s history—legendary Hall of Fame UNC basketball coach Dean Smith, who would visit the beach every summer for a week or two with his family.

“Remember VCRs?” Teressa Dew asks with a laugh. “Dean would come and get a VCR because we rented VCRs back then. Of course, Daddy would give it to Dean for the week, and Dean would give Daddy tickets to any game he would want to go to. He was watching game tapes is what he was doing. So the man never stopped working!”

For their part, Linley and Teressa Dew have continued the spirit of trustworthiness and charity that their parents instilled in them from the beginning, back to when Linley was six years old, stocking hardware in the summers.

“When you call here, you talk to the same people,” Linley Dew says. “You don’t talk to someone different that you’ve never met. Our employees have longevity. Customers get acclimated to us that fit our culture here.”

When asked to define that culture, Teressa Dew chimes in to sum it up: “Family-oriented.”

And this approach, she and her brother believe, is what will help them continue to succeed in the future.

“The future of Dew’s is tied to the future of the beach,” she says. “I feel like it looks good. We’re working real hard, and we’ve got lots of ideas about what we want to do. People are moving here. They’re retiring and moving here. Short of a catastrophic meltdown, the future looks good for us and for everybody here.”

In September, near the date of the store’s first opening in 1947, that future will include a 70th celebration party. Although Teressa Dew doesn’t know exactly what form the celebration will take, she knows it will involve barbecue. After all, she’s got another brother who’s good at cooking it and who once owned a barbecue restaurant. And if there’s one thing for sure about the Dews, it will be the phrase Teressa likes to use: family-oriented. 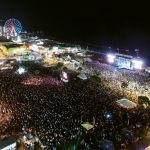