On a recent foggy November morning, 20 freshman ROTC Air Force cadets—more than 30 miles away from their home base at Socastee High School, but nevertheless still in Horry County—are sitting cross-legged in a circle and petting an alligator across its scaly back.

The alligator’s name is “Pigeon” and it is certainly alive—indeed, bright-eyed and seemingly nervous—but it is only 16 inches long and its snout has been clasped shut with a hairband. The cadets themselves do not appear scared. After all, they’ve just held a corn snake named “Elmo.” And they also know that confronting their fears is partly why they’re cadets, and why they’ve ventured out to Playcard Environmental Education Center in the first place.

“One of the things we like to do at Playcard is we like to take some of the things that bring out scary emotions with some people and use them as a teaching tool,” says Ben Abercrombie, the center’s self-described “director, teacher and janitor.”

“But it’s always ‘Challenge by Choice.’ You do what you want to do. The most important things are to promise to work together, to be safe, to have fun.”

And having fun, in fact, might be the original point of the county land where the center sits. According to Shana Bury, a 2014 Coastal Carolina University graduate and an assistant educator at the center, Playcard gets its name from when folks simply used to play cards while waiting for the local grist mill to grind their corn.

In 1981, members of the Horry County Conservation Foundation—especially Mr. James Blanton, who was a cofounder of CCU—wanted to work with local landowners to preserve large tracts of land for future generations to enjoy the area’s natural resources.

Mr. Blanton, says Abercrombie, “literally wrote the idea down on a napkin, submitted it to some of his friends, and in two years this place was being built. It started out as 57 acres. Now it’s over 200 acres, all contiguous, all one giant land mass that the county uses for education, conservation and definitely team-building.”

And nothing at the center perhaps embodies those ideas more than the main indoor classroom, which itself is almost like an Horry County natural history museum—a kind of educational “game room” filled with taxidermied wildlife, rattlesnake skins, bobcat skeletons, aquariums full of swamp species, and even the unborn fetus of a whitetail deer soaking in a jar of formaldehyde.

This hodgepodge of ecological knickknacks sets the tone early for any visit, reminding students that everything in the room once came from the local woods outside—the very place, of course, where the students are headed to next.

So Abercrombie distributes to each cadet a blindfold. “The biggest part of Playcard Environmental Center,” he tells them, “is not just getting to know nature, it’s getting to know each other.”

The cadets are to lead each other, in a single file line, down the center’s “Braille Trail”—a nature trail designed to be accessible and educational for the blind and which won an international award from The Lion’s Club.

At the edge of the woods, Abercrombie stops them. He asks them to report what they can sense without sight, to smell the air with their mouths. The cadets report back that they notice the air is much cooler. The ground is leafier. They can hear birds.

Abercrombie smiles and points out the sound of a red-bellied woodpecker, then a crow, then a hickory nut hitting the roof of the building.

“I’m trying to make you more aware—more awake, you might say,” he says, and the cadets seem to get it.

Indeed, Abercrombie’s natural and effective teaching style reflects the fact that he has taught more than 100,000 students (zero snake-bitten!) in his 20-plus years at the helm of Playcard. But he seems especially to connect with these ROTC cadets, as he served in The National Guard out of Fort Jackson, as well as trained in law enforcement at the Department of Natural Resources. Indeed, today he also reminds them that there is a large, important and often under-recognized part of our military called The Green Wing, which helps serve environmental conservation efforts.

And his experience also helps guide the students through what they must do next—the kind of team-building and trust-building low-ropes course that the military often uses in their own training. The cadets split up into two teams and head to stations in the woods around Playcard. One group tries “Islands Adventure,” in which the students try to get the whole team from one small wooden island to the next using platforms of various lengths; the other tries “Rope Swing,” in which the students try to help each other across an imagined pit, one at a time, on a rope swing and land in hula hoops on the other side.

Each task has layered complexities, as when Abercrombie gives one team a bucket of water and tells them they need to carry this “magic potion” across without spilling it. Or later, when a group tries “Spider Webs,” in which the cadets try to help each other through the holes of a web-like rope, one hole at a time.

After each task, Abercrombie asks the students to reflect on if and how they succeeded and how they might apply these concepts to real life.

“You guys are our next generation’s leaders,” he says. “What are some things you think you can take away from this?”

One cadet says, “There might be some people you don’t like in the future, but you need to work together?”

All the other cadets nod agreeably.

Another cadet pipes up: “We need to pick each other up instead of putting each other down?”

Abercrombie seems pleased. His students have clearly gotten the lesson.

And one of the ROTC leaders, Mark Bookey, looking on reflectively himself, whispers, “This place just builds better citizens all around. They learn something new every time they come out here.” 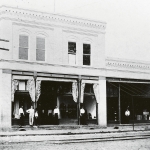 Exploring the landmarks and rich history of historic downtown Conway