Teal Nation starts with a village—many of them—built across the campus of Coastal Carolina University. And those villages rise up and conquer, thanks to the strength of rock-solid leaders like Coach Gary Gilmore.

He’s sunken into a black leather arm chair in his roomy office overlooking the third base line of Springs Brooks Stadium. Plastered in a photo scene mural on the opposite wall is a tribute to the team’s College World Series win in Omaha. Gilmore is relaxed, with a CCU baseball polo, a soft drawl and a slow smile.

Regardless of what I imagined, based on Gilmore’s post-game interviews on ESPN or what others told me of his naturally friendly tendencies, I was still intimidated to meet this coaching legend—like a Vince Lombardi of baseball. But as soon as he apologized for being late after a pop-up planning meeting for the upcoming summer baseball camp to be held down on the ballfield and began fiddling with the black Sharpie on the coffee table, my nerves faded like Arizona did after that third game of the series. We’re all human, after all.

“Oh man, it’s been great,” he says of his hectic post-season schedule. “People want a better piece of you and that makes for a busy day, but that’s a good thing. I get to promote CCU, our baseball program, Conway and Myrtle Beach. It’s incredible.”

Gilmore is now a local celebrity on a national scale—on the receiving end of handshakes, back slaps and even applause when he pumps gas, goes out to dinner, pushes his cart through the local grocery store or boards a plane.

“It’s a neat thing to know that so many people across the country were witness to what this group of young men and assistant coaches and me were able to accomplish,” he says. “It’s a great story in itself, and people want to grab onto it. We’re that Hoosiers movie or that Miracle on Ice analogy I’ve been using excerpts from over the years.”

For Gilmore, that’s 21 years as head coach of the CCU baseball program, leading variants of the 2016 team to 15 NCAA Regional appearances and three NCAA Super Regional appearances. In 1996, after coaching six seasons at University of South Carolina Aiken, Gilmore took the reins at CCU, where his heart always remained after he graduated and hung up his baseball uniform. He would raise the CCU baseball program up from a losing season at the bottom of the pack to Division I national rankings in a winning stretch from 2007 to 2012, when CCU qualified for the NCAA tournament. Gilmore almost left in 2008 when he was wooed by Auburn with a bigger paycheck and better facilities. Almost. But he couldn’t abandon his school and the love they shared. There was just one condition: he made CCU President David DeCenzo promise to build him a stadium worthy of the team’s national ranking. The new Springs Brooks Stadium, as part of a $15.2 million renovation to the baseball and softball facilities, opened last season.

The 2010 squad came ever so close when they hosted the University of South Carolina at the Myrtle Beach Super Regional, but lost to the team that would eventually go on to win the championship that year. 2016 was CCU’s year, closing their season with 55 wins in game three of the College World Series, which was enough for the national championship. Gilmore would be named the National Collegiate Baseball Writers Association National Coach of the Year and Big South Coach of the Year for the ninth time.

Beyond the obvious talent of Gilmore’s 2016 lineup, he knows it’s more than that.

“We had a mature group,” he says. “It was personally rewarding because they honestly were all in. In this day and age, to get 27 people to be all in, that’s a lot. … To do whatever role we put them in, to give up anything. And we win. It’s about us achieving a goal. It’s difficult to find that anywhere in the world right now—and to maintain that over a long period of time.”

That, and the team bonded as a band of brothers while on the road seven of the last eight weeks of their season. It was a bond and a love that formed, like a family, through the good times, as well as the bad in the challenges the team had to work through that people may not realize, Gilmore says. Right fielder Connor Owings, for instance, played through one kidney that’s completely shut down until his mother, a match, donated her kidney post-season. Third baseman Zach Remillard had reconstructive surgery on his arm only a little over a year ago. Alex Cunningham, pitcher, almost lost his arm from gangrene two years ago from surgery. Then there’s Jaymie Thomas, wife of pitching coach Drew Thomas, who was diagnosed with breast cancer last summer and underwent chemo treatments with Drew by her side. And, finally, Jayden Schnall, son of associate head coach Kevin Schnall, who survived a series of life-threatening blood clots after emergency trips to MUSC.

“We had to discuss these things with our players,” says Gilmore. “We had to talk about life. We had to tell older pitchers to carry out the plans for the day or tell the guys to pick each other up. I believe they became who they became because they were forced to deal with these challenges and step it up. This was reality. We could’ve easily thrown in the towel and thought it’s not worth it.”

But it was their mentality that kept them going—all the way to Omaha. It’s a mentality Gilmore incorporated from sports psychologist Brian Cain, whom he invited to meet and consult with the team in 2010. That year, two words derived from those consults and stuck: relentless and selfless.

“Those two words are what show up on the field, in the classroom, in the community and with our families,” says Gilmore, “and that’s been instrumental in this program. It’s great to relate those two words to how the players react to the spotlight, when everyone’s watching them.

“I want to invite him back to meet with the older guys here to share with the new guys what it took to get here, what advice they can pass along,” he adds.

Advice for Gilmore came by way of his father, Richard, who was an incredible influence in Gilmore’s life—especially in the sports world.

“I also learned from him my grinding and work ethic and the way he went about life,” says Gilmore, “but his passion for baseball was second to none. And that passion was translated to me as well.”

From the time Gilmore was able to stand at home plate, he played baseball. Growing up in a small town in Franklin County, Va., Gilmore says baseball was something they all lived and breathed.

“Dad would come home from work and would have half a dozen kids waiting in the field to play catch,” he says. “He coached me when I was little, so I had a lot of good father-son times. He taught me how to play, not so much mechanically, but how you play: with enthusiasm, respect, integrity and competitiveness.”

And on the days the father and son didn’t play baseball, they talked about it. Gilmore says he would ride with his dad in the car over summer break while Richard stopped at schools throughout Virginia to sell and deliver office supplies.

“With AM radio about 100 years ago, it could’ve been like being in a jail cell,” says Gilmore of the car rides. “You have no place to go. … It was amazing how we could talk about baseball for hours and hours and it would never get old.”

Richard Gilmore passed away two years ago in the spring, a great time of year for baseball.

Gary Gilmore has since passed his baseball legacy onto his children, now grown. His son, an alumnus of CCU, played baseball for his alma mater, just as Gilmore did, and signed onto a minor league team under the Dodgers. He now works and lives here locally with his wife, who also graduated from CCU. Gilmore’s daughter, who is about to finish up her degree in occupational therapy, is a proud alumna of CCU and engaged to a player with the White Sox. Gilmore’s wife is also a proud CCU alumna.

“So we really do bleed teal,” Gilmore laughs. “We love traveling together or just hanging out. Every vacation we’ve ever had was always combined with baseball and tournaments in some way. They’d be at the beach or something while I was on the field.”

From his days playing in center field in a CCU uniform to coaching for USC Aiken and 21 seasons at CCU, Gilmore has always been on the ballfield. How does he top the magic made on the field in Omaha?

“How could you ever top the perfect storm?” he says. “Part of how we did it, the greatness of it, was that it was the first time. Not many people outside of our region truly knew of us. … Many have heard of us and knew the name of our school, but couldn’t really tell you about us. Now that’s changed forever.”

“I think it will be interesting to see the residual of what we accomplished in people sitting in those teal seats or on the lawn,” he says. “Just as we were lifted up by fans at the end of the season. … Are we going to be at the beginning this season, when we need an extra nudge, especially by those who told me they’re teal for life? I mean, it shouldn’t be hard to sell tickets. We’ll see if there’s excitement come February.”

As for the final season for Gilmore, he laughs and says it won’t be for a while, but he’s already recommended to President DeCenzo to have the torch passed to Coach Schnall.

“It would’ve crushed me to bring in another guy who’s won a whole lot of games over here and leave this coaching staff, these fellow Coastal guys out,” says Gilmore. “These guys are some of my best friends and we have stayed together.”

It’s just another example of living through those two key words: selfless and relentless. 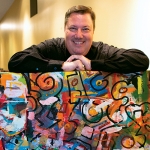 Stylist Leona Mizrahi creates a story by hand through fashion