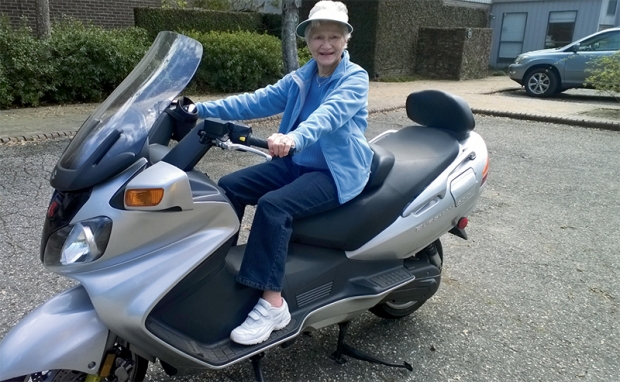 I roll back the throttle of my Suzuki as I turn onto the avenue leading into my Pawleys Island neighborhood. The early afternoon sun drips through the bearded branches of ancient oaks, making random puddles of light on the asphalt. In the distance I see a familiar figure walking in my direction. A spontaneous smile spreads across my face. She tends to make folks react that way. Flicking up my face shield, I brake as we meet.

“Hey, neighbor,” she calls out.

“Hi, Pudgy Forrester. How are you?” I reply. Someday I’m going to find out why everybody calls her that ... all 105 pounds of her.

“I’m fine,” she says. “What a gorgeous fall day. Perfect jacket weather for my daily walk. By the way, would you take me for a ride sometime?”

“Absolutely. How about now,?” I offer.

“That would be wonderful!” Pudgy starts to mount the bike. “I don’t know if I can get my leg over the backrest.” But she does, settling her 92 years onto the seat behind me.

Cruising the quiet streets in our community, we pass trees and bushes dressed in brilliant autumn colors. Suddenly, I hear my passenger laugh. “I’m loving the ride!,” she shouts. “How fast will this thing go?”

We stop in front of Pudgy’s condo. “That was so much fun!,” she exclaims. Her blue eyes sparkle like the breeze-kissed surface of a pond on a bright, cloudless day. Makes me smile.

“Pudgy, I’m curious. How did you get that nickname when you’re the exact opposite?”

“Why don’t you come in and I’ll tell you. Now’s a good time. I play duplicate bridge Mondays and Thursdays. Wednesday I have a manicure appointment before going out with the monthly lunch bunch. This Saturday and Sunday are my altar guild days.”

The front door opens to the aroma of cinnamon. Pudgy hangs up my jacket and asks if I’d like a cup of mulled cider. She sees me eying large-print books on a side table. “I love James Patterson,” Pudgy says.

We settle in for cider-laced conversation. Pudgy tells me she inherited the moniker from her older sister who moved away to college, taking everything with her but the title. And it stuck, even though this Pudgy has never weighed more than 113 pounds, pregnancies aside.

Pudgy was born in the South Carolina town of Florence. Her father had once been a Carolina baseball player on his way to ultimately becoming president of Jefferson Standard Life. Her mother raised Pudgy, her sister and her brother. During the Depression, the family lived with her grandmother for a while in a house cramped with relatives and boarders. Her Daddy gave her an affection for golf. Tennis passion was a gift from her mother.

My hostess recalls her Limestone College days, followed by a stint as an adventure-seeking stewardess at Delta Airlines.

Next came an executive secretarial job in Greenville, where she met Prince Charming, her first spouse and the father of their children. “My husband was a wonderful man in addition to being a successful real estate developer. I never would have dreamed I’d one day be the grandmother of nine children, great-grandmother of ten.” She gazes into the distance. “I married again after my first husband’s death at age 39,” she said. “My second husband was a fine, tall, handsome architect.”

I’m fascinated by her stories and ask for more. She smiles as she tastes the recollection of penny candy from her grandfather’s grocery store. She learned sewing from her mother and cooking lessons in her grandmother’s kitchen. An aunt introduced her to knitting and the feel of wooden needles turning yarn into sweaters.

Fast-forwarding to her married life, Pudgy takes on the look of someone pulling faded photos, letters and party dresses from an old trunk in the attic. She remembers a scary helicopter flight in Alaska, handshakes with Arnold Palmer and his wife in Hawaii, riding past London’s Buckingham Palace, Wimbledon Stadium, the Tower of London, Big Ben.

Pudgy’s tales are punctuated with laughter. Mirth when she thinks about her donkey ride in the Greek Isles and the antics of traveling companions. She relives Monte Carlo, the French Riviera, Tokyo, Venice and China.

“Well, I’ve rambled on way too much,” Pudgy stands. She thanks me for listening. I admire the way she’s told her anecdotes wrapped in modesty, devoid of any semblance of boastfulness.

“You know,” Pudgy waxes philosophical, “looking back over my blessed life, even with its lows and highs, I feel like shouting ‘Wow! What a ride!’ And if I’m fortunate enough, there’ll be more road ahead. With a mother who lived to be 96, a 93-year-old grandmother when she passed away and a sister now 95, maybe my chances are pretty good. Like Frost, I have miles to go before I sleep.”

As Pudgy’s door closes behind me, I realize her stories have been glimpses from the mountaintops. She hasn’t dwelt on the treacherous curves, rough patches or potholes deep enough to have swallowed some folks. But that’s her, lady of grace and grit. Not given to self-pity or bitterness. Consumed instead by optimism and the anticipation of excursions yet to come. 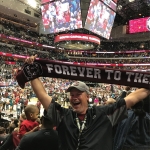 The USC Gamecocks made it to the Big Dance, and he was there to witness history
GENERAL TAGS:
dresses / Pawleys Island