The USC Gamecocks made it to the Big Dance, and he was there to witness history 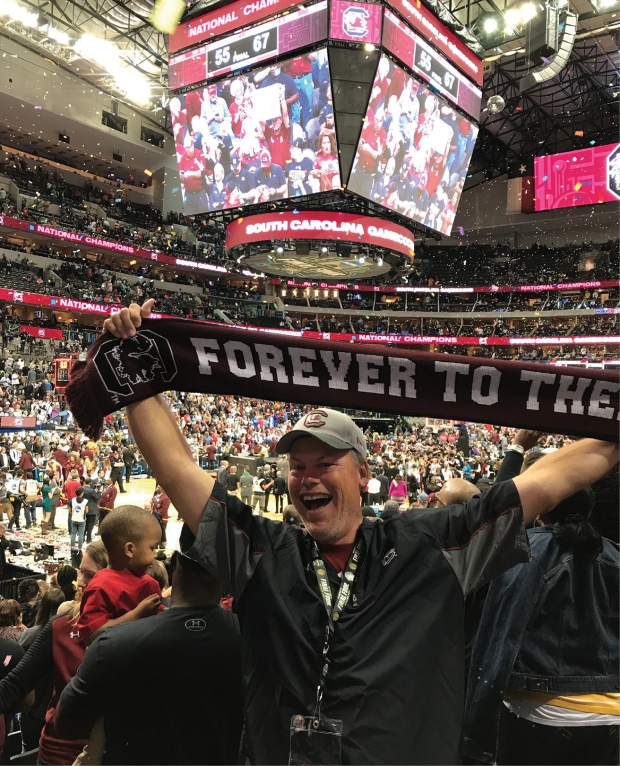 It’s said the road to the Final Four is long. Getting to both Final Fours in one weekend isn’t easy. Inspiration helps, particularly when the signs pile up.

On a Sunday, South Carolina’s men’s basketball team made the Final Four for the first time. It hadn’t won an NCAA tournament game in 44 years, then it ran off four wins to get to Phoenix. The next night, the women’s team clinched a Final Four trip to Dallas, where I had lived twice to work at the Dallas Times Herald and The Dallas Morning News.

On Tuesday, I received a piece of luggage, a lottery prize from my employer, Apple, Inc. A boatload of available vacation hours cleared for the weekend. Over the week, Apple stock jumped plenty enough to cover costs. Everything was screaming, “Go,” but it still felt nuts by Wednesday.

That morning, Aunt Jean sent a text asking a favor. I told her it might have to wait; I had promised myself years ago that if the Gamecocks ever made the Final Four, I’d be there.

“Yes, by all means, go!!! You don’t know when this will happen again,” she replied by text.

Aunt Jean reminded me of a mantra I tell my two grown daughters. “Just show up,” I’ll tell them. “It makes things happen.”

It moved fast from there. I found frequent flier miles for a nearly free flight to Dallas. Friends in Dallas and Phoenix offered lodging. Tickets for both events were available online. The tough part? Getting that rental car from Dallas to Phoenix and back, and maybe again if the wins piled up. It’s 1,100 miles one way.

I wouldn’t be traveling alone. Classmate Chrysti Shain, who also was a colleague when I worked in Myrtle Beach at The Sun News, was sending along a lucky scarf through a colleague of a friend. It would be meet me in Dallas, complete with its own Twitter account to document the trip.

I landed in Dallas midday Thursday, plenty of time to see my home for 13 years and catch up with friends from the paper. As usual, seeing Cindy, Denise, Dave, Mark and Bill lifted my spirits and recharged me for the drives ahead. They worried for me and dispensed wise advice: I should book a round-trip flight from Phoenix to Dallas if the women won Friday.

Friday afternoon, I met Matt Tischler at the team hotel. Matt had been traveling three straight weekends following the Gamecocks, and he had brought my traveling companion from Chrysti. The Gamecock Scarf (@GamecockScarf on Twitter) was something I always thought would be a great idea. One side has CAROLINA. The other, FOREVER TO THEE, which is the last three words of USC’s alma mater. Perfect.

And it has power. I’ve spent countless hours in press boxes, where cheering is unprofessional. I still stay quiet at games.

The Scarf did my shouting.

I entered American Airlines Center and simply stretched The Scarf above my head on the long trip to my seat. I was so far up, the team could win and be on the plane before I could rush the court. But oh, so many in that stadium saw CAROLINA and FOREVER TO THEE. The Scarf made it clear that we’re here, and we’re not going away.

Of course, Dawn Staley had her team well prepared and didn’t need luck, but I still took care to drape The Scarf across the shotgun seat minutes after the 62-53 win over Stanford.

The Scarf’s power didn’t rest on the overnight drive through Texas, New Mexico and Arizona. Our win and Mississippi State’s upset of No. 1-ranked Connecticut kept me wired for three hours. The Scarf kept me awake the other 12, inspiring Twitter posts. It became clear that another 30-hour driving loop would be dangerous, so we booked a Phoenix-to-Dallas round-trip flight. 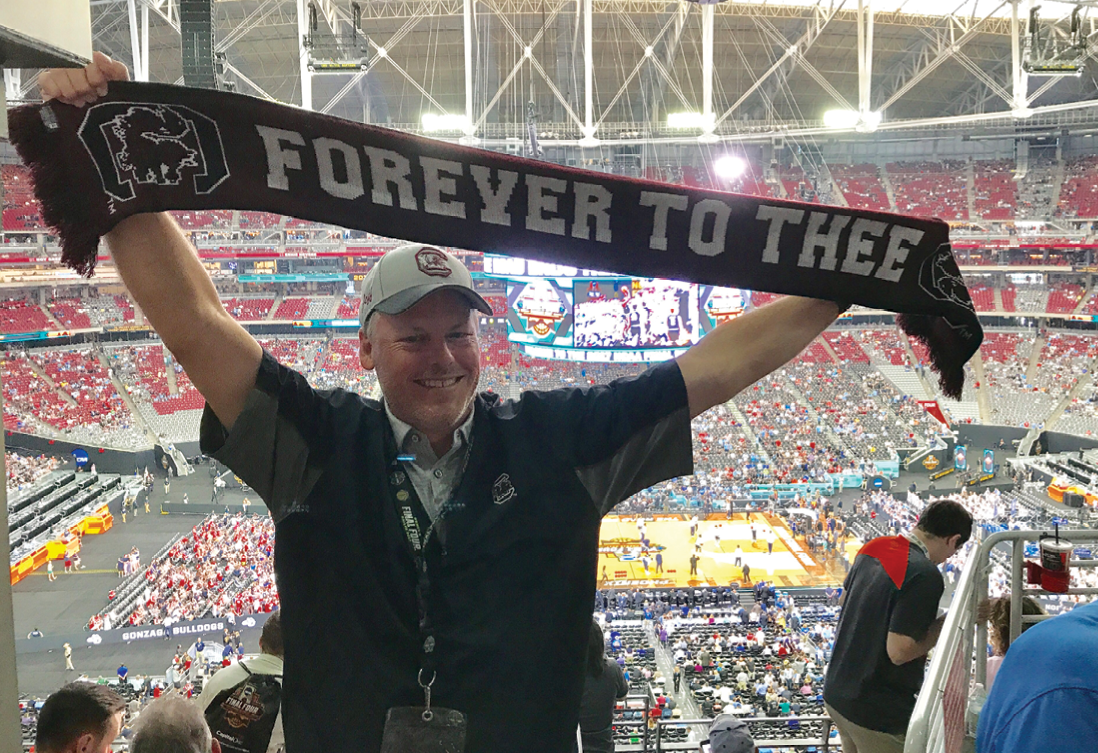 PHOTO: Showing his Gamecock pride in Glendale for the Men’s Final Four game.

The men’s Final Four is just bigger. It took hours to get into University of Phoenix Stadium in suburban Glendale. Every concession and restroom was packed, even during the game. The nose-bleed seats were twice as far away as in Dallas, but that meant The Scarf was seen by more, particularly the North Carolina fans who still looked shocked to see garnet, black and CAROLINA at this event.

I longed to be in the Carolina student section courtside, particularly when the Gamecocks roared back to tie it at 65. I was in the midst of a gaggle of Gonzaga fans, who were now nervous after leading by 14.

But the Gamecocks ran out of gas, losing 77-73. I felt depleted, too, at the airport. It was late Saturday, and I had been up 38 hours. I nodded at USC fans awaiting flights, knowing a shared heartbreak that we just missed a dream shot at North Carolina.

Twenty-four hours later, on Sunday night, I was back in the Phoenix airport, elated and charged. USC’s women had downed Mississippi State with ease in the Dallas final, 67-55.

I made my way behind the bench to see the national title trophy raised. Coach Staley brought it over to show family and fans near where I stood and held The Scarf high for her to see. I scooped up some confetti and headed for the airport.

The Scarf insisted we make the men’s final. So I entered the stadium in Phoenix, holding it high for all to see. Carolina was here, and we’re not going away.

The Scarf slept for the 14-hour race back to Dallas to make the flight home to Charlotte. I unpacked The Scarf and let it know the big surprise: Chrysti said I could keep it. It’s in the closet, eager for the next big games.

Jeff Rogers, a 1986 University of South Carolina graduate, lives outside Charlotte. He worked as a news editor at The Sun News from 1988 to 1989. 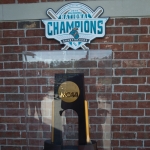 Coastal Baseball - Getting their mojo working

As a new season heats up, we look back at the Chanticleers’ College World Series Championship, a run fueled by talent, togetherness—and a few lucky charms and superstitions. 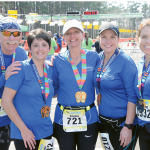