October 2017
A time of lessons and love 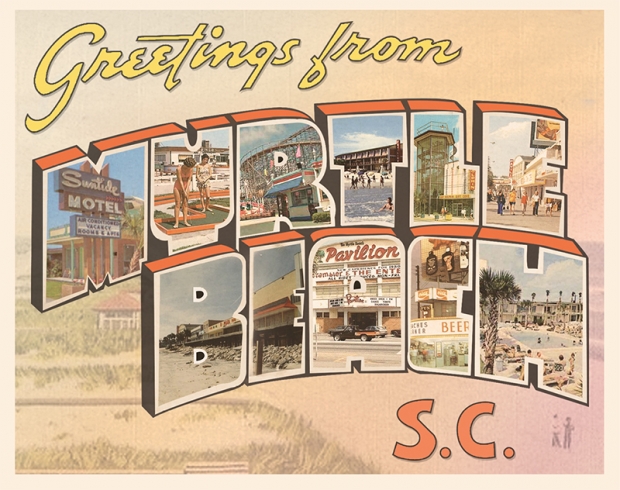 Myrtle Beach, like all physical things, has changed since 1963. But my memories of the summer of ’63 “on the beach” live as they happened. It was the summer of the song “Wipeout;” learning to sell to tourists in Jerry’s beachwear store; making necklaces to sell from small shark’s teeth and cheap silver-plated wire; hanging out in the Pavilion at night to pick up a girl to go and watch the submarine races; sipping cider in the back of The Shack, a bar with a dirt-floored room where we “bums” would hang out; “winning” everything from toy poodles to ironing boards at the bingo game; meeting Alicia, whose black hair and blue eyes I still can see. And it was the summer of lessons learned.

I was 16, and David and Randy, two wrestling teammates who had just graduated, talked me into going to the beach with them for the summer. They had secured jobs with David’s uncle as lifeguards and told me I would have little trouble finding a job. Ricky helped me get a job “on the strip” on my third day, next to the bingo parlor where he worked for Harry, the caller of the night bingo games. Jerry and Mildred owned the beachwear shop and they hired me to sell everything from costume jewelry to clothes. Excited, I ran to tell David and Randy only to find a note from them that they were homesick and had left the beach. Without them, I learned my first lesson: a person can be lonesome in a crowd. But another lesson learned was that I could gather myself and make a go at working on the beach.

It also helped when Jerry found me a nice room in a rooming house annex not far from the store. The room was clean and I shared a bathroom with other “bums.” Each morning Jerry would come by and call me from the screened window. I could get up, dress, go for a brief swim, then stop at the KK shop and get two lemon, two jelly and two plain doughnuts before going to the store. Jerry would take the bag and go into the back to make his first coffee royal of the day.

Soon the sun would clear the bumper car building across the street, and another day of meeting tourists as I sold them cheap merchandise began. There was another employee named Rudy, but he and Mildred came in to work around noon. I would take a break until about four, and then would return to help close the store at ten. Rudy was the first “out” homosexual I ever encountered, and he taught me how to accept and respect him for who he was. Another lesson.

Eventually I met other “beach bums” or full-time beach residents who worked on the beach. One “bum” I remember is Dewey, who did not work anywhere but managed to live quite well. He was a hustler with dark hair, a slender frame, jade-green eyes and pale skin that the sun never touched. Older and always nice to me, he broke the cardinal rule of a “bum”—he fell for a tourist during her two-week stay at the beach. For many nights of her stay I saw them in the back of The Shack, snuggled together in a booth. When she went home, he was a pitiful and mournful sight. Then one night when I entered the back of The Shack, he called, “Roger, look who came back.” Smiling and cuddling, the happy couple was holding onto their summer of ’63 in their favorite booth.

A fellow named Danny from Gaffney, South Carolina, came to the beach about halfway through the season. I helped him get a job and he seemed, like the rest of us, a good enough fellow. One night he wanted to really “dress up” to impress this girl he had met. I loaned him my white ducks, my favorite pants of sparkling white cotton, fresh from the dry cleaners with a sharp crease. He wore a red pullover, and he did look good with his beach tan and bright smile. The next day he did not show up for work and a policeman we had nicknamed “Big John” told someone that he was in jail. I went to the jail and there he was—all covered in dried blood from his forehead to his knees. It seems that someone made a remark to his date and he hit the fellow, who had friends that joined in. He was a mess, as were my favorite white duck pants. We all gathered money for his bail, and I was chosen to go to court to post it, but we did not need to. The judge asked Danny if he were released would he go straight home, leaving the beach?

The last time I saw Danny or my precious pants, both were on a bus to Gaffney. That, and something I saw in court before his hearing, taught me another lesson. A man was in jail for throwing his wife into a ditch full of water and trying to drown her. The judge asked the man to explain and all he said was that he and his wife drank and fought all the time. This was nothing new for them, he said. The judge asked the man how much money he had and the man said $10. Then, said the judge, your fine is $20, or you go to jail. The man walked past his wife as he was being led away, and she put a $10 bill in his hand. I learned something about abused women and something about the judicial system.

Bill, who was my age and a summer friend, was a full-time resident of the beach. He helped me to break the cardinal rule, just like Dewey. Bill introduced me to a classmate of his, Alicia.

We were well into the summer when I met her—the girl with coal black hair and piercing blue eyes. Her fair skin was not ruined by the sun and her manner was soft and kind and caring. She lived a few blocks off the beach with her mother and younger sister. Her father was not present much, and when he was he was a mean Southern drunk. Her mother worked in a town drugstore to support the three of them. Alicia and I shared many life situations, such as being rather poor, and perhaps that is what drew us together. She was 15 and I was 16, and as Tricia Yearwood sings, “We were young and in love/We were easy to convince/ We were headed straight for Eden/It was just around the bend.”

The last month of the season, I was either working or with Alicia. We walked the beach, we sat in the back of The Shack, we sat in her house with her mother and sister, we sat in the Pavilion and watched the tourists, and we were always talking and sharing. Usually Labor Day is the end of the season. I asked Jerry to let me continue working, and he did. Most of the “bums” left, returning to their lives at home and in school. I stayed, but for me the beach was not empty at all—life was still full of Alicia. But then I learned the lesson that something good can only be forced to last only so long, and I found a ride to Charlotte one day in late September. From there I would take a bus to my hometown, Kannapolis.

Bill and Alicia met me that morning, and the vision I carry is of Alicia standing with Bill. She is wearing a blue seersucker shirtwaist dress with a thin black belt. Her night-dark hair flows to her shoulders, framing her soft face and blue eyes. We just stand and look at each other, and I mumble something like, “See you later.” She turns and walks with her friends to school, and I get into the back of the sedan for the ride to Charlotte. Throughout that fall we tried to stay connected, but my summer trip to Eden with Alicia faded into another lesson.

Being honest with myself about my summer of ’63, I must admit that much of it was like Dewey—a hustle. I learned to hustle the tourists, I hustled prizes at the bingo parlor, I hustled girls to go with me to watch the submarines races on the beach at night. It was a summer of hustle and learning. All but for Alicia. She was real. And she is still real, in only the way a girl like Alicia can be. 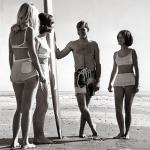 Camera in hand, Jack Thompson has immortalized Myrtle Beach in thousands of pictures, one click at a time
GENERAL TAGS:
myrtle beach