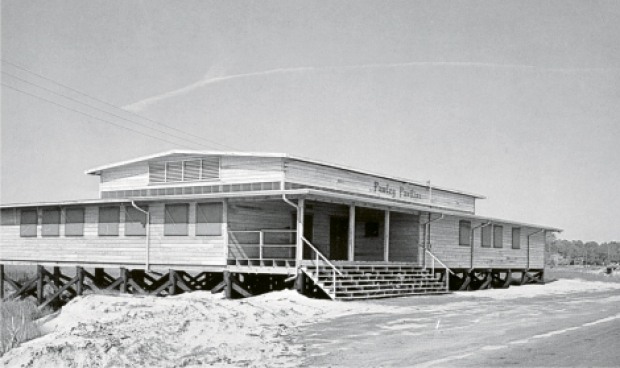 When people think about the Grand Strand, tourism and vacations are probably the first things that come to mind, so it’s easy to forget that this area has a rich and varied history. But over the years—often in the name of progress—landmarks and buildings have been swept away, razed or covered over, even though today we wish they could have been preserved. Four of the most prominent of these landmarks which bear revisiting are the Pawleys Island Pavilion, the Washington Park Racetrack, Hurl Rocks and the Myrtle Beach Prisoner of War Camp. Each has its own interesting history.

The Pawleys Island Pavilion
Unique as one of few old Grand Strand landmarks whose memory hasn’t vanished with its physical structure is the Pawleys Island Pavilion (or Pavilions, as the case really stands). The pavilion was so revered, and its mention evokes so much nostalgia, that even today annual festivals are held and hundreds of people gather to celebrate just the memory of the pavilion—even though no pavilion has existed in Pawleys in any form since the 1970s.

The island’s first pavilion was built in the early 1900s and was simply a wooden structure located among the dunes north of South Causeway. The main activities at the pavilion were dancing and drinking, and local legend has it that even during Prohibition you could enjoy an alcoholic libation if you knew the right people and the price was right. Eventually this pavilion was converted to a cottage, and a second pavilion was built nearby in 1925. This simple structure, with wooden floors and no restrooms, was just north of the first pavilion. Bands would play during the summer, but it wasn’t until the third pavilion was built in 1935 that the bands became an integral part of the nightlife of the Pawleys Pavilion. This third pavilion, built near the South Causeway and known as the Lafayette Pavilion, would be a mainstay of summer activity on the island. It was after this pavilion burned down in 1957 that the most famous pavilion of them all was built in 1960, the pavilion on the marsh at the North Causeway.

This building was funded by a group of locals, and Georgetown Senator James Morrison even had the triangle road built at the site to provide a location for the building. The large wooden structure had a spacious dance floor and booths around the walls, and soon it became the place to be on the south end of the coast. From 1960 until 1970, many bands familiar to aficionados of Carolina beach music played the pavilion. The Drifters, Monzas, Maurice Williams and the Zodiacs, Catalinas, Embers, Esquires and many others drew large crowds who enjoyed good music, cold beer and a safe place to relax and have a memorable summer evening.  One of the most interesting attributes of this building was that both customers and band members were invited to sign their names on the building, which explains the ubiquitous graffiti in photographs taken in the 1960s.

Unfortunately, in June 1970 the pavilion was burned down by an arsonist, and many suspected it was because some area residents feared the pavilion was becoming too popular, and as such was drawing in too many outsiders and starting to attract the “wrong crowd.” Though there were plans to convert a nearby structure into what would have been a fifth pavilion, area residents who had apparently had enough of the crowds and traffic bought that structure and razed it.

Today, annual spring festivals in Pawleys Island celebrate the summers spent at this last pavilion. Real estate on the island is far too pricey for the construction of this type of commercial structure today, though no doubt many residents would love to once again walk over to the pavilion for a cold beer and to listen to some beach music.

The Washington Park Racetrack
In the 1930s, after the opening of the elegant Ocean Forest Hotel and the establishment of Robert Woodside’s Arcadia community, Myrtle Beach seemed destined to be a resort that would appeal to an urbane and sophisticated international crowd. Early developers believed these people would be looking for entertainment in addition to the beaches and the diversions that the planned golf courses, tennis courts and polo fields would have to offer. As a result, the Washington Park Racetrack must have seemed to be a high-end amusement that was exactly what the area needed.

In June 1938, Washington Park Racetrack opened at a site near what is now 21st Avenue North and Oak Street in Myrtle Beach. With seating for more than 5,000 people, the mile-and-a-half track offered harness racing several days a week. Built at the then-not-insignificant cost of $40,000, the grandstands offered a superb view not only of the track but of the ocean as well. Postcards from the 1930s and ’40s show bleachers packed with well-dressed spectators enjoying races and the scenery.

But by 1947, the track had closed. Opened in anticipation of legalized pari-mutuel gambling, the final gambling bills were defeated and there seemed little reason to continue operating. Though the track briefly reopened in the early 1950s, with gambling still illegal the effort was doomed to failure. The track also had a brief run as an auto racing venue in the early 1950s before the Rambi Racetrack (now the Myrtle Beach Speedway) opened.

Even though the Washington Park Racetrack no longer exists, a vegetal outline of part of the track is still visible at the site of the Wells Fargo Bank on Oak Street in Myrtle Beach. The original grandstands were moved to the Rambi Racetrack when it opened in the 1950s.

Hurl Rocks
This site was named for an English settler named Hearl who lived close to this unusual geologic formation of two-million-year-old black rocks located at what is now 21st Avenue South in Myrtle Beach. Once a popular destination for people curious to see the only naturally-occurring rocks on the South Carolina coast, they were noted by 18th century naturalists John and William Bartram on their travels through the Southeast. Described by Bartram as “so soft” that a sharp knife could cut holes in them, this outcropping of rocks—once actually described as a cliff—was a popular destination for picnics and beach parties, and in the early 20th century the rocks still stood as much as six feet above the sand. By that time the name had become “Hurl Rocks,” and although today a plaque exists honoring the Bartrams and their discovery, the rocks themselves can no longer be seen. Though once a staple subject for the tourist-postcard industry, the rocks were covered by the extensive beach renourishment projects of the 1990s. There’s always the chance, though, that the next big storm may once again expose the rocks and bring to the surface one of the area’s most unusual landmarks.

The Myrtle Beach Prisoner of War Camp
Most people would be quite surprised to learn that Myrtle Beach was the site of a prisoner of war camp for German POWs during World War II. The first camp in this area was one of eight temporary camps in South Carolina, housing as many as 600 German prisoners in the area near Cane Patch Swash that stretched from the beach to U.S. 17 between 71st and 79th Avenues North in Myrtle Beach. The men in this camp were put to use performing various tasks of manual labor in the area, but most notably to cut pulpwood. Later they helped build the barracks on the Myrtle Beach Air Force Base, and they were eventually moved to a more permanent facility nearby.

This being the beach, however, conditions were still idyllic. One official noted of the Myrtle Beach camp, “I could not help but think of a Boys Summer Camp in which I used to spend my vacation; the same beautiful trees, same seclusion, same quietness of the woods, and similar barracks, too.”

In 1945 when the Great Pee Dee River flooded, many of the POWs from Myrtle Beach helped rebuild and repair the washed out bridges. Though there were a few escape attempts, all of the escapees were later apprehended and only two prisoners died here; one drowned swimming in the ocean (his body is buried in the Ocean Woods Cemetery), and another committed suicide at the end of the war after learning that Germany had been defeated. By 1946, all of the German prisoners were allowed to return to Germany.

The first, temporary camp had been dismantled after the prisoners moved to the permanent facility, and no trace of this camp remains in what is now a well-developed area. The second camp was absorbed into the air base, which is now a high-end commercial and residential property. In this case, the Myrtle Beach Prisoner of War Camp is a historical site that has vanished without a piling, earthwork, or even a plaque to mark the spot.