Memories of World War II Through the Eyes of a Child 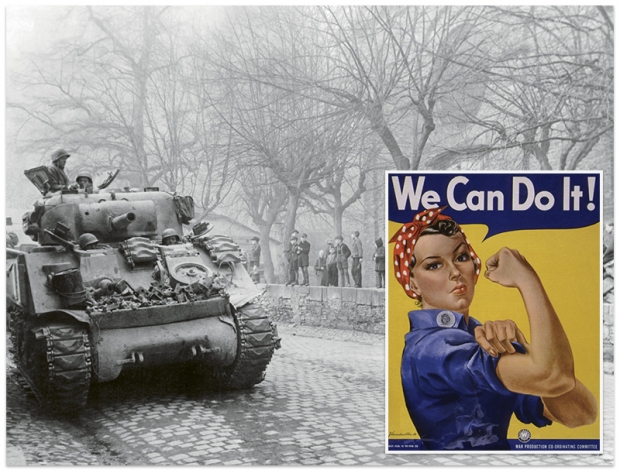 We watched the fighting in Europe in black and white at the movies. They called it “The Eyes and Ears of the World”—a newsreel showing the war over there. Our world back here was pretty peaceful, filled with playing games, shooting marbles and building forts in the nearby woods.

As a kid, it was hard to understand all that was going on in the world. In the newsreels, we saw German children who looked just like us but wearing military uniforms, marching in parades in front of a man called Hitler. I was eight. What did all this mean? The only uniforms we knew were our Girl and Boy Scout uniforms and the police and firemen; that is, until the three young servicemen from next door came home. We were in awe of them as we sat in their kitchen at the table and they shared their combat stories about the Army, Navy and Army Air Corps. We were spellbound as they told their tales of combat.

With many of our men going off to war, there were manufacturing jobs taken over by women. Our mom was a stay-at-home mom, but there was one neighbor lady who filled a job vacancy at the Glenn L. Martin Aircraft Manufacturing Company. These women were called “Rosie the Riveter” and were extremely important in the war effort. I didn’t know what the “Rosie the Riveter” name meant, but there were plenty of posters celebrating them.

Some signs of war were going on in our neighborhood as well. We had blackout periods to keep us safe from the potential of an air raid by the Germans. Our father was an air raid warden. When the appointed time came, a siren was heard and our dad, wearing his helmet and badge, left to patrol the streets, making sure that all window shades were pulled and the neighborhood was completely dark. Not even a ray of light from a flashlight or a candle was allowed.

In school, we had air raid drills. The entire student body went outside and laid down in a large trench-like gutter next to the road behind the school. We dared not move until the “all clear” was sounded.

Many families in our community were German, and our Lutheran Church had a Sunday service in German for them. That is, they did until the war. Some of the farmers in our community used German prisoners of war for field hands and pickers. That led to the FBI watching over all of us to make sure no one was a German sympathizer. I didn’t know about the FBI watch until years later, and today it would probably be called profiling. Also, our dad told his parents not to speak German in front of my brother and me. It was very clear we did not embrace the German cause.

One of the challenges at home to support the war effort was to save our tin cans. My brother and I would fight over who got to stand on the cans to squash them. We saved our bacon drippings from cooking. Turning “bacon into bombs” was the slogan used to encourage participation. We were helping the war effort.

Uncle Sam wanted us to buy war bonds, so my brother and I would dress up and present a song and dance show like we saw in the movies, for which our grandparents and neighbors gave us money. We also saved money from our allowance from doing chores until we had enough to buy a bond and to make Uncle Sam proud. He was, after all, pointing his finger right at us.

Sugar and butter were rationed. There were books of ration stamps, which were necessary to purchase various food items as well as gasoline. As a “family at home” we were doing our part to support our family who were “over there.”

“Over There” was a song we sang, along with many other tunes from stars like the Andrews Sisters. Singing these songs created a spirit of nationalism; we were proud to be Americans. Kate Smith’s “God Bless America” was sung at every family reunion. When our cousin Buddy came home, there was a huge backyard picnic to celebrate his safe return. The ukuleles came out and a chorus of family and friends sang the night away under the banner “WELCOME HOME BUDDY.”

On VJ Day and VE Day, the kids in the neighborhood put on scout uniforms and marched up and down the roads, all the while banging on pots from our moms’ kitchens for drums. Some neighbors celebrated by shooting fireworks and sparklers, firing their hunting guns and blowing car horns. It was a relief at last for the possibility of peace and we celebrated.

Editor’s note: At presstime, plans were underway for the War & Peace Veterans Concert with the Long Bay Symphony on Nov. 9 & 10. Go to longbaysymphony.com for details. 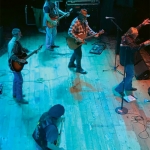