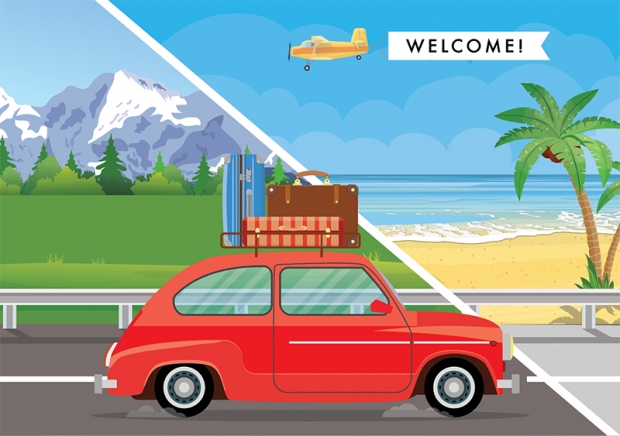 In August, I returned to the Grand Strand after 15 years in northern Virginia to find that many of the reasons I relied upon to convince myself to uproot were gone, and that everything I had loved about this place remained (with the exception of hurricanes).

Due to nothing more than the whims of fate, I had also spent exactly 15 years living along the coast, from Murrells Inlet to Little River, before settling down to a comely family life in the live-oak-moss-draped city of Conway. I made lifelong friends in my single days as a reporter at The Sun News and member of the Myrtle Beach Jaycees (many of whom remain). In 1991, I met my husband at a Myrtle Beach resort during a convention, and we married on a golf course in Longs where he was an assistant pro. We enjoyed many a happy hour at the Colonial Charters clubhouse, where my mother-in-law made sandwiches and bantered with the regulars who were our mutual neighbors.

Having two daughters just under two years apart resulted in my decision to become a stay-at-home mom, and we moved to Conway where I helped form a Mom’s Club. Those memories, especially, stay with me to this day—playdates for the children in suburban homes that smelled of Gain detergent where we moms could spend some adult time kibitzing and commiserating; date nights with my husband in twinkle-lit, downtown eateries; bicycling with our girls in child seats to the riverfront from our small Cape Cod home on Laurel Street, the place where my three girls learned to climb to the top of the sprawling magnolia tree in the secret little wilderness between my home and the Wilsons’ on Elm Street (what a grand reunion we had recently!).

I felt joyfully connected, and it was heart crushing to pull up the deep roots I had planted. So, in 2003, I fortified myself by mustering reasons that leaving would be better, in addition to the job opportunities: 1. My daughters would not grow up seeing lusty-eyed women on far too many billboards advertising strip clubs and ascribe those qualities as paramount and most desirable in a female, reinforced by a bikini carwash and T-shirt shops displaying denigrating images of women. 2. My daughters would not become assimilated into a lingering culture of white privilege that erased the ugly past of Southern slavery. I could feel a blind eye turned to incidents of racial injustice and this isn’t something I wanted my daughters to grow up thinking was normal.

I return now with one daughter left at home, 16-year-old Eleanor, to find a much more metropolitan, sophisticated place where I see no billboards of barely clad women and more artistry in the billboards that remain. A drive down Ocean Boulevard in North Myrtle Beach reveals beachwear store displays of traditional red-and-white lifeguard hoodies and tasteful, local T-shirts.

And as for racism? Well, as luck would have it, my daughters ended up at a high school outside Winchester, Virginia. I recently mentioned to my nephew the time when my middle daughter, Colleen, and her African-American best friend, Kae, came into class to face a tiny noose hanging on the far side of the TV, and Brendan said, “I have never seen anything like that at my school.’’ (He attends Carolina Forest).

What remains are sun-warmed beaches, open skies—after living where mountains crowd the view, it is a stunning sight—and, of course, the possibility of hurricanes. That reality hit us all too quickly as Florence churned ashore. It brought back memories of Hurricane Floyd, which cost my brother and sister-in-law their Godfrey Avenue home due to flooding, much the same way Florence decimated homes, again, in Conway and beyond.

But I am a hurricane veteran. During Hugo, I was a young, hard-charging reporter who stepped outside Socastee High School to feel the wind’s intensity and drove the next morning to Garden City Beach, seeing homes rearranged and tossed into the marsh as though by a tantrum-throwing giant. Tom and I were young parents through Fran. We stayed at Tom’s parents’ house—happily, our neighbors again and the place we stayed during Florence—and I remember feeling the pulse in my neck as I cradled my first child, Adrianne, because now I was responsible for her safety. Mostly, due to our prior life here, we are not cowed by hurricanes, and I suppose we truly became locals again, one month in, when we had to qualm the fears of Northern friends insisting, “Get out of there! Evacuate!” Instead, we joined locals on a Cherry Grove beach a day before the storm hit, defiantly taking selfies, quaffing beers and toasting.

We know we face the occasional consequence of living close to the ocean. But we experience anew a place full of friendly people who chat with strangers of all races and ages in store lines, who reach out to help those flooded and who offer a friendly, neighborly wave. And, too, it feels enriching to have the historical perspective that stands me in proud awe of how the area has matured, and to realize this salty-aired, flat stretch of fickle, roaring coastline was and always will be the embodiment of home for me. 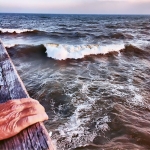 Reflections on a Wave

Take the pledge to put down your phone while the wheels are turning
GENERAL TAGS:
t-shirts / myrtle beach / Conway / Virginia / Ocean Boulevard / living