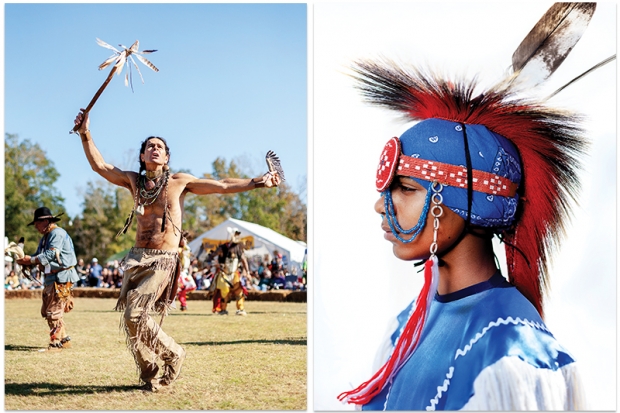 We have several natural wonders and cultural treasures here along the Grand Strand, perhaps more than our share when compared to other regions of the nation. Ranking near the top of this list is the Waccamaw Tribe of Native Americans who live in our midst.

These people have a proud and ancient history that far predates any arrival in the Americas by European immigrants. These original inhabitants of what we now call Horry County continue to practice their sacred traditions and honor their ancestors while also assimilating into modern American culture. Tribe members pursue careers in every area of modern American life, including business, education, medicine, manufacturing, farming, transportation and more, and their children attend traditional American schools. 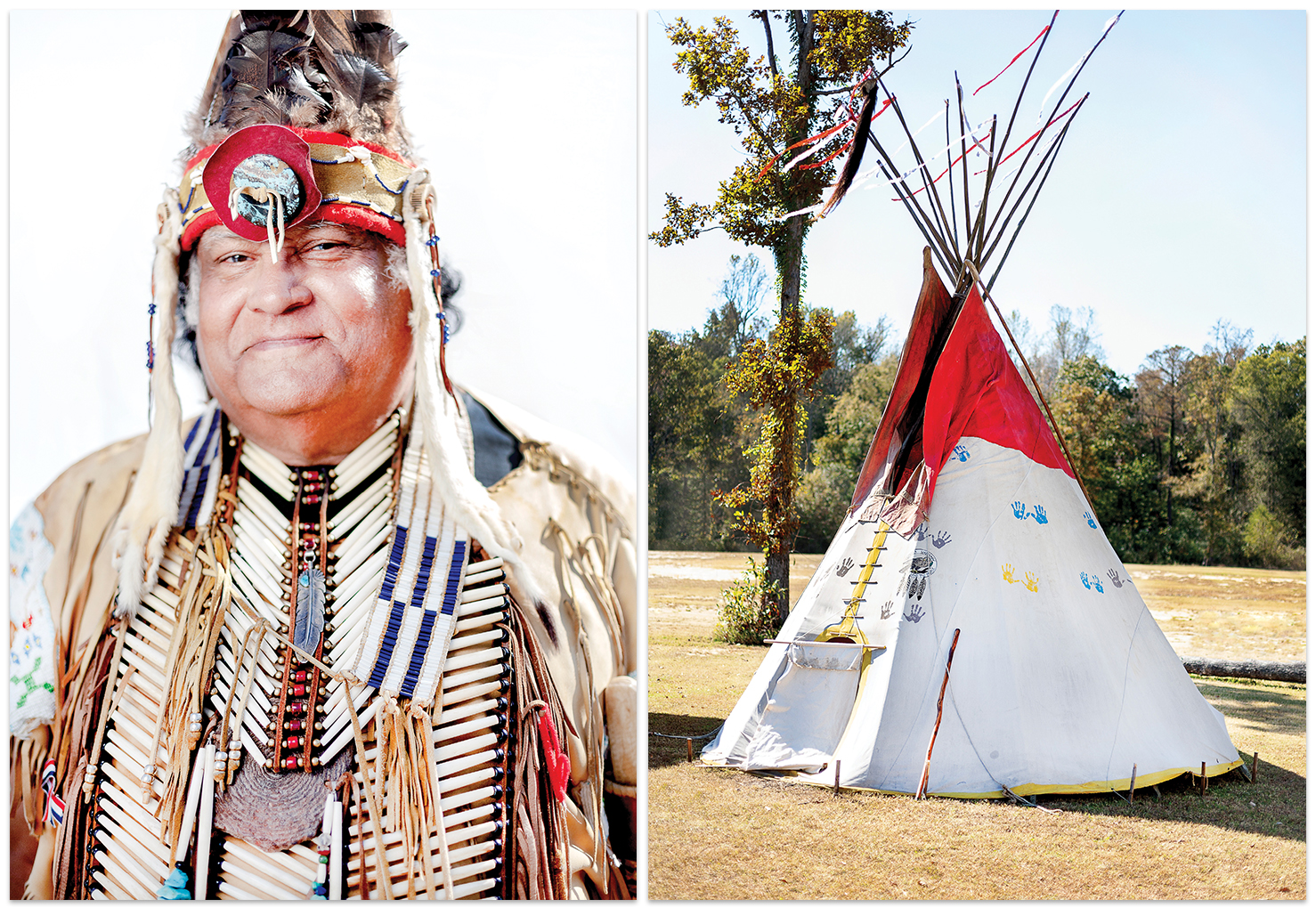 “A map from 1725 shows a Waccamaw village located between the Pee Dee and Waccamaw Rivers,” said Tribal Chief Buster Hatcher. “Since highways and other landmarks are not shown on the map, and distance measurement was not accurate 300 years ago, we can only approximate where that village was. Most likely, it was at or near Dog Bluff, where the Dimery Settlement was established in 1813.”

It’s believed the Waccamaw people inhabited the same area from prehistoric times through today. Other historic maps, charts and papers support this belief, including a 1925 local map published in the Horry Independent newspaper. Chief Hatcher added, “My father went to school on the Dimery Settlement and so did his cousins, brothers and sisters. This is also where our tribe’s land is located, today.”

In current times, the tribe has about 450 card-carrying adults. Children of members are automatically members at birth, but are only registered through their parents. They must apply for membership on their own at age 18.

“These original inhabitants of what we now call Horry County continue to practice their sacred traditions and honor their ancestors...”

The Waccamaw Tribe is managed by three distinct branches—executive, legislative, and judicial—each overseeing and working with the two other branches. There are seven members of the Council—seven elders and four in the executive branch—the chief, vice chief (next in line if the chief fails), one second chief of external affairs and one second chief of internal affairs. 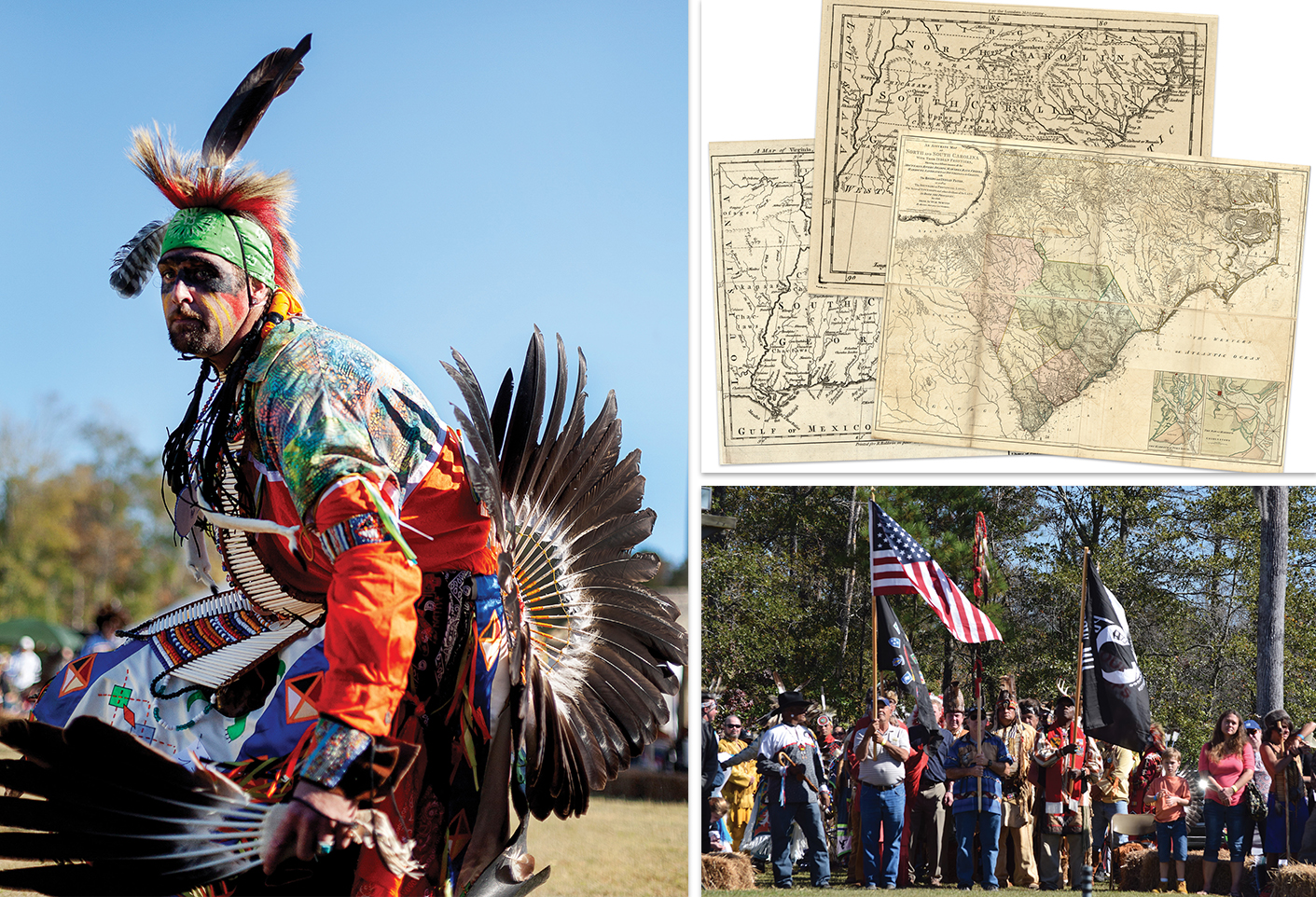 (Clockwise from left) “While some Pauwaus reward dancers for their expertise and style, the Waccamaw believe that dance is an art form and should not be judged.”; Several maps and other historical documents strongly support the tribe’s claims to their land; Each year, the Pauwau features a ceremony to honor America, its military veterans and active service members.

Chief Hatcher said the tribe also has many kinfolk who claim to be white and have no interest in joining the tribe, and probably another thousand people who are eligible but have decided not to become members. As chief, Hatcher oversees many important tribe functions, including community outreach and government relations. His tenure has seen a long and often frustrating struggle for recognition and preservation of sacred tribal customs and traditions. He continues to work tirelessly with government officials to further improve the tribe’s rights and status.

It took many years, but now the Waccamaw Tribe is a founding member of the South Carolina Indian Affairs Commission and has worked with every governor of the state since the Honorable Carroll Campbell in the late 1980s to improve the lives and status of the state’s first inhabitants.

Though tribe members have assimilated into modern American life, they also are fiercely loyal to their history and traditional ways. The tribe conducts an annual Pauwau, open to the public, where members perform ritual dances and display arts, crafts, food and other traditions. It is an event with specific meaning and purpose as opposed to the “pow wow,” which is a catch-all phrase begun by European settlers. 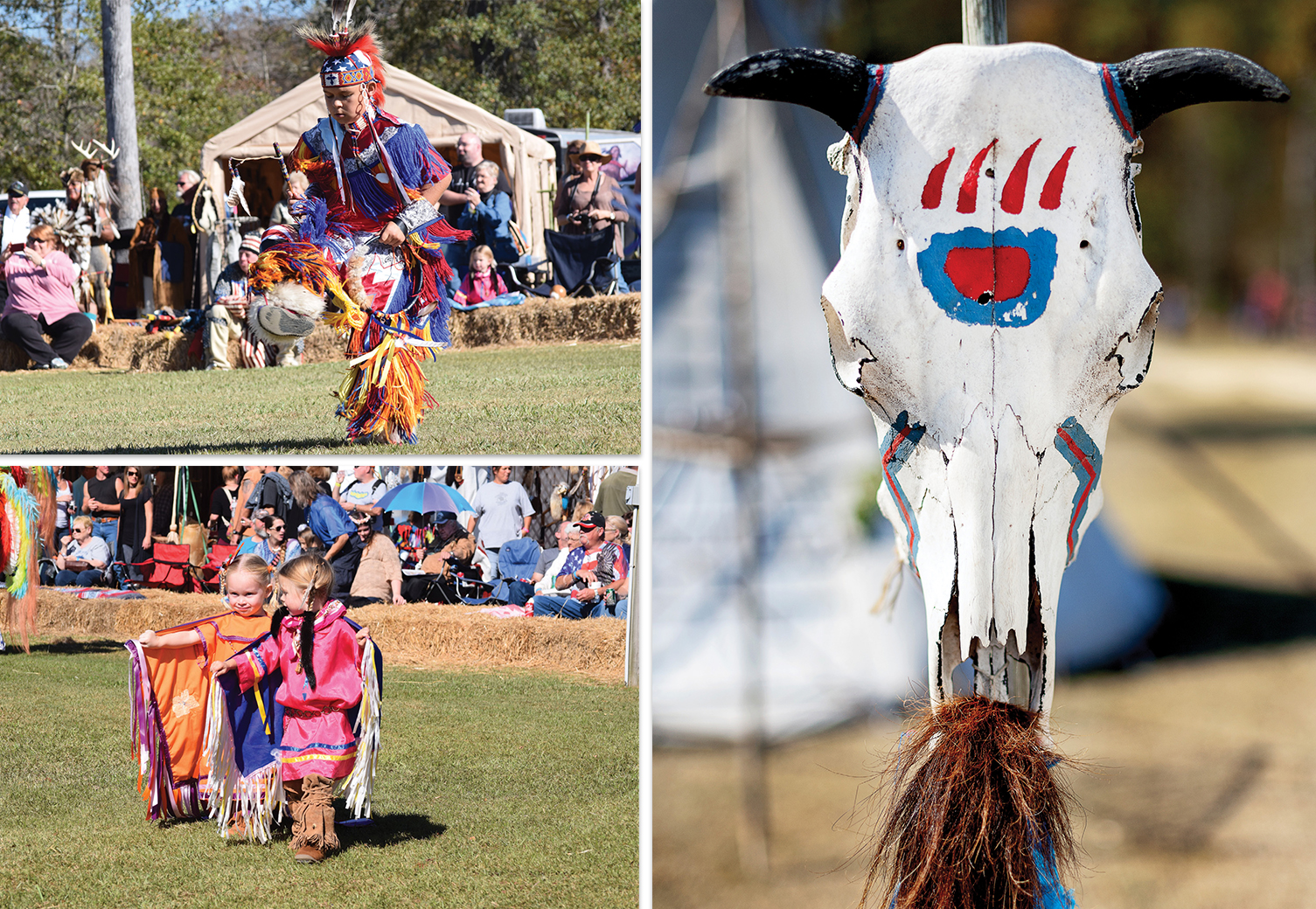 (Left top, bottom) Young members of the tribe learn about ancient customs, dance and sacred rituals to preserve the tribe’s rich cultural history; (Right) “Though tribe members have assimilated into modern American life, they are also fiercely loyal to their history and traditional ways.”

The term “pow wow” likely was a corruption of the Algonquin word, Pauwau. Originally, the Pauwau was not an event, but a spiritual leader who had special abilities to heal or offer advice from the ancients. For centuries before Europeans arrived, most Indians lived in extended family groups, including members of other tribes if a marriage was intertribal. Members of one group might leave an area to visit other family members, celebrate a birth or marriage, or care for a sick loved one. Groups often moved to escape bad weather or find new planting and hunting grounds.

The Pauwau retained his influence over his people and they would return to his village to obtain his guidance, visit family or mourn the loss of a loved one. Visits to the Pauwau were normally scheduled in the spring, after the winter thaw, and in the fall, after the harvest. These visits were festive and happy occasions, but very spiritual in nature. To help those in need, the Pauwau used many techniques, most of which centered upon drumming, dancing, prayer and providing counsel. Over the years, the Pauwau came to refer to the gatherings, activities and ceremonies rather than the person known as the Pauwau.

These social gatherings were labeled “pow wows” by the Europeans, and the term became a panacea for all Native events involving drumming and dancing. However, the Waccamaw adhere to their ancient traditions as much possible in modern times and choose to call and spell their event a Pauwau.

Today, activities at a Pauwau differ from one to another, but there are several things that most have in common. Those that can be observed every year at the Waccamaw Pauwau include:

The Grand Entry: Actually the start of the Pauwau. Prior to the Grand Entry, the Grass Dancers are called to “Dance the Grass Down.” In this manner, an ancient method is used to prepare the arena for the actual entry of the visiting dignitaries, veterans, tribal officials and others who hold positions of honor. They are followed by a long line of dancers who represent dance styles from many tribes in the country. After the procession, America is honored with a Flag Dance, veterans with a Veterans Dance, and then a word of thanks to the Creator for giving us this day and each other.

The Friendship Dance: One of the favorite dances of most Pauwau participants. The dancers form a long line while holding hands. Leaders lead the dance through various movements and tie the line of dancers into various knots and formations inside the dance arena. The Waccamaw usually have a friendship dance following every Grand Entry. 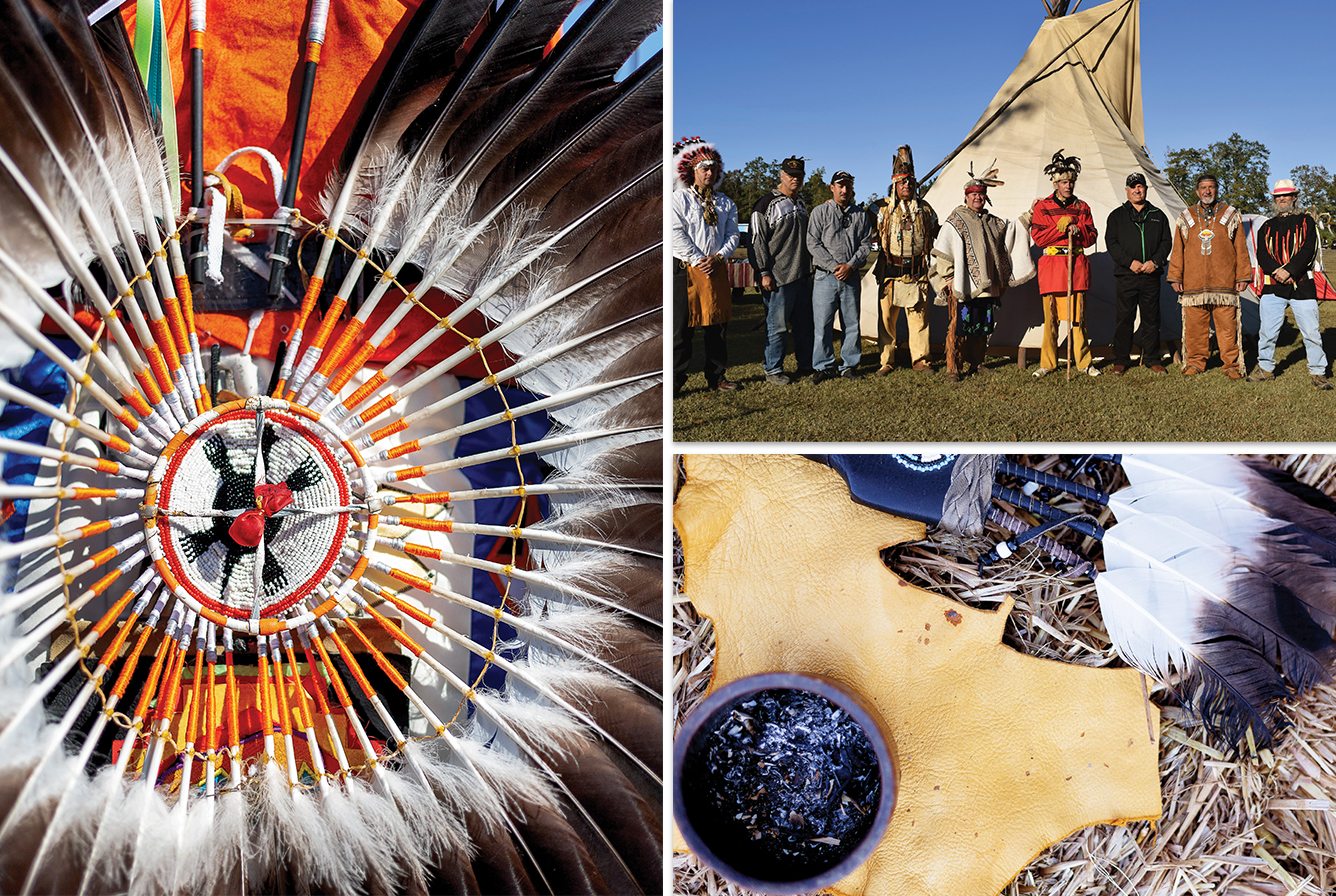 The annual Waccamaw Pauwau attracts chiefs of other tribes from all across America.

Dance Demonstrations and Competition: The master of ceremonies calls for dance groups to demonstrate various styles of dance, twirling, dipping and repeating movements their ancestors have done for generations. Pauwau dancers build their own regalia and must eat, sleep and otherwise survive while visiting. While some Pauwaus reward dancers for their expertise and style, the Waccamaw believe that dance is an art form and should not be judged. Therefore, a dance raffle is held and dance teams receive payments based on the luck of the draw.

The Waccamaw Cultural Arts Festival and Pauwau is in its 28th year and is the biggest and best attended Native event in South Carolina. It attracts 7,000 to 8,000 people of all races and backgrounds. Past visitors have attended from Florida, Tennessee, Georgia, Alabama, North Carolina, Virginia, West Virginia, and even as far away as California. In 2003, more than 21 Tribal Chiefs from across the nation attended and a photo of all these chiefs is now used on the State’s Commission for Minority Affairs poster.

The Pauwau is always held on the first Saturday and Sunday in November at the tribal grounds, Bluewater Road in Aynor, S.C. This year, it will be November 7 and 8 and the public is very welcome to attend.

“We encourage all our friends and neighbors to attend our Pauwau,” said Chief Hatcher. “Better understanding of our history and culture will lead to better relationships for all in the future.”