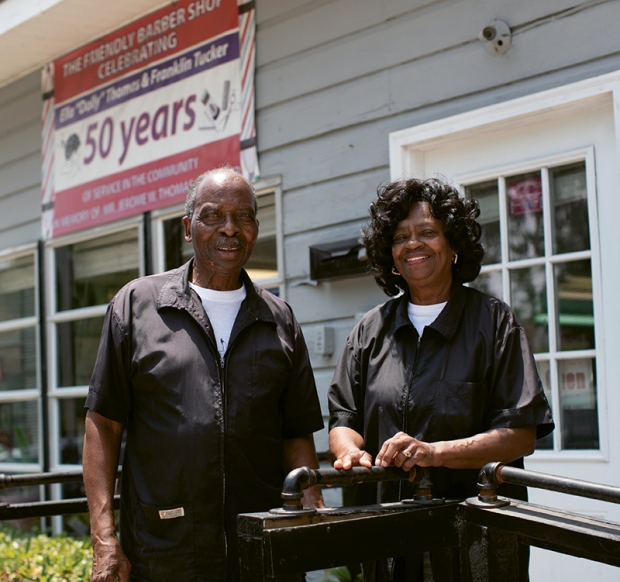 With hair clippers in hand and know-how coursing through their veins, Ella Mae “Dolly” Thomas and Franklin Tucker have made copious customers funky fresh at Friendly Barbershop. From Afros to Caesars and beyond, they have designed dos that demand attention for nearly 113 years combined.

These purveyors of style can be found at 1403 Carver St. in Myrtle Beach. Friendly Barbershop is one of the treasures left from the heydays when this black community called “The Hill” flourished with businesses during the time Jim Crow ruled the South.

“The Hill would be jumping from Friday morning to Monday morning,” said Tucker, 78, after he finished cutting several heads, tiny tumbleweeds of hair gathered on the floor around his white Nikes. He has been a barber for 59 years and has worked at Friendly Barbershop for 53 of them. Thomas has 53 years as a professional in her hair clippers.

“Back in the day, The Hill was like a little New York,’’ chimed in Thomas, 73, on a sunny Saturday morning in June when the barbershop was packed with patrons. “The sun never went down.”

If “The Hill” was a tiny Big Apple, then Friendly Barbershop was a part of Myrtle Beach’s Harlem during its renaissance. 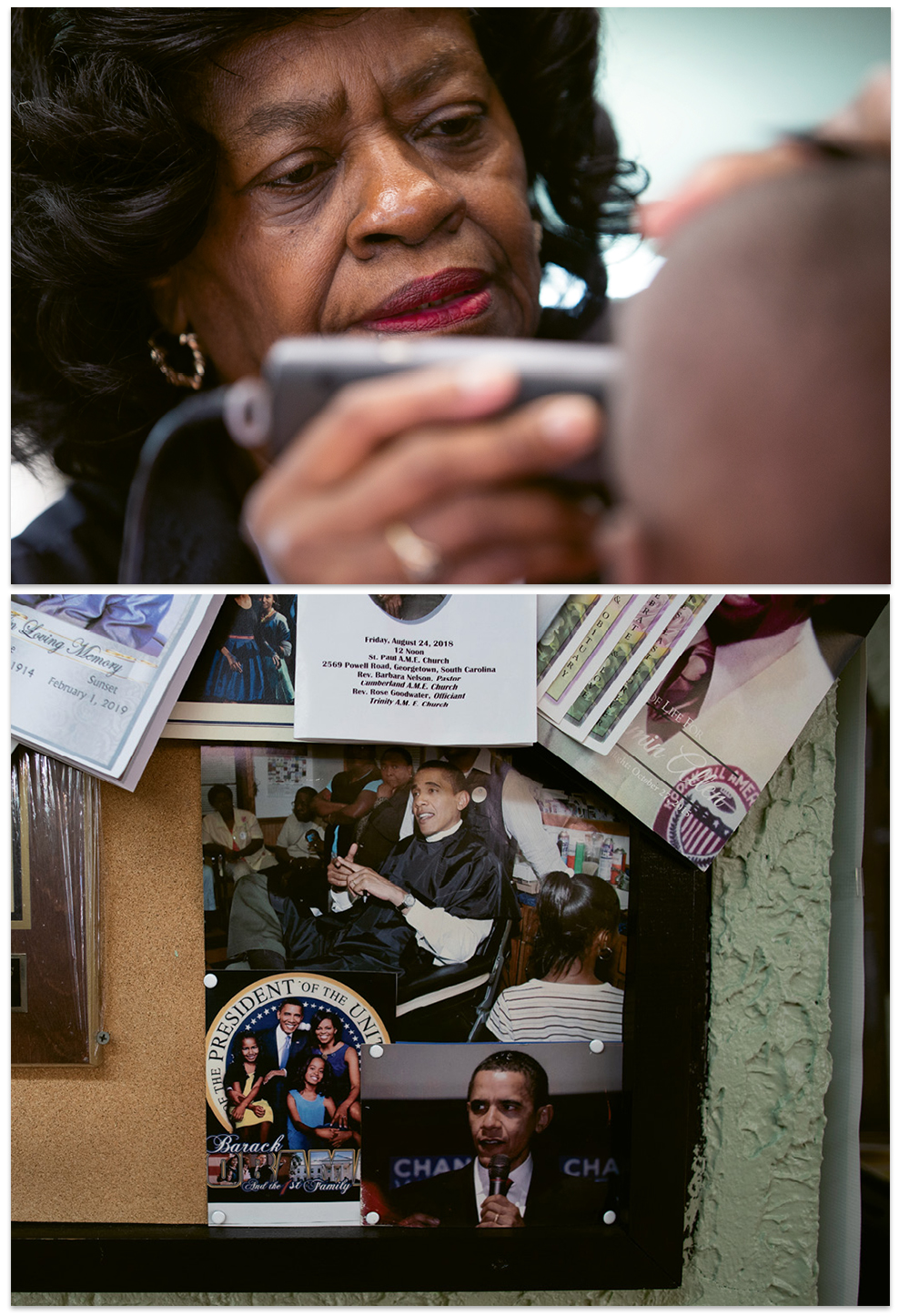 Friendly Barbershop keeps memorabilia on its walls, including this pic of Barack Obama getting a haircut in Marion County during his first presidential bid.

Thomas’ late husband, Jerome Woodson Thomas, founded the barbershop in 1954. It was the knee-baby among big-brother businesses like Charlie’s Place, a club launched in 1937, and The Whispering Pines, a motel that opened in 1946. From the 1930s to the 1960s, entertainment venues, including Charlie’s Place, Little Club Bamboo and Patio Casino, were among Carver Street’s flourishing establishments that drew a slew of black celebrities to this area. Segregation limited their choices.

Some of them moseyed on over to Friendly Barbershop.

“I was coming off the porch of Charlie’s Place, finishing up a craps game on the porch ... when I noticed a man coming out (of Friendly Barbershop),” said Dino Thompson, a 73-year-old author and Myrtle Beach restaurateur who was one of the white guys who regularly hung out on The Hill. “That dude looks like Marvin Gaye.”

Thompson was correct. It was Marvin Gaye. The Motown legend had indeed been at Friendly Barbershop and chilled with Jerome Woodson Thomas after getting a fresh conk. Gaye took pictures with him in his studio, which was in another building attached to the barbershop. They both sported killer conks back then. Each man’s hair was silky smooth and glistened. The “Stubborn Kind of Fellow” singer even hung out long enough to play a game of basketball with other patrons behind the barbershop.

“I did quite a few conks,” Thomas said, “but Jerome did Marvin’s conk.”

She did, however, style Samuel David Moore and David Prater of the soul pair Sam & Dave.

“I can’t remember what kind of cut I gave them because it was so long ago,” Thomas said, “but I know they were satisfied with the work I did.”

Most of the patrons of the past and present, however, are just common folks. Hospitality workers, college students, single moms, entrepreneurs, bankers, and other everyday people frequent Friendly Barbershop.

“Coming here is one of the highlights of my week,” said James Chestnut, a 58-year-old bellman. “If I am in a bad mood, my spirits are lifted once I step through the door.’’

Chestnut visits once a week, and Thomas gives him a temple fade, which is when the hair is cut low at the temple. She adds a slanted part to his soft, curly hair, which has been Chestnut’s signature motif for quite awhile.

“I brag about my barber,” he said. “There is no other barber in Myrtle Beach who can cut as good as Miss Dolly.”

Thomas and Tucker know exactly what kind of haircut their regulars want. They simply plop their bottoms into a barber’s chair, chat, and relax until their cut is complete, which typically takes no more than 15 minutes.

The appreciation for their talent is relayed via firm handshakes, generous tips, warm smiles and high-cotton compliments.

“It doesn’t matter whose chair I sit in,” said Chestnut, who is a lifelong customer, “I always get what I need.”

Barbering was bound to be in their blood. DNA and dogged determination wouldn’t let Thomas and Tucker do otherwise.

For Thomas, Creolia Pinckney was the first to stir her passions to pursue hair care as a career. Creolia, her mother, was a beautician for nearly 40 years.

“When I was a little girl, she used to put Shirley Temple curls in my hair,” said Thomas. “My sister, Alfredia, and I never went to the beauty shop.”

Yet Thomas didn’t want to be a beautician. Her fascination was fixed on barbering. In the early 1960s, she went into a Georgetown barbershop and spotted Susan Davis Grant Armstrong doing her thing with hair clippers as the lone female in a male-dominated environment. Armstrong’s pristine, polished appearance and the novelty of working with all men was enough to hook Thomas for good.

Thomas went to the Area Trade School, which is now Denmark Technical College, to study barbering in the 1960s. In 1966, the Georgetown native came to work at Friendly Barbershop.

Tucker, who also graduated from the Area Trade School, had started his career at Friendly Barbershop a week before her. At that time, Tucker only worked on weekends. It wasn’t until 2007 that he began working a regular schedule at the shop.

As a little boy, he began cutting the hair of kids he knew on Sandy Island, where he was born and raised. He only charged a nickel since he figured he was “messing up their hair anyway,” and it wouldn’t be fair to charge them anything higher. Later, he honed his skills on grown men.

“When I was in the military, I had to do at least 300 cuts a week,” said Tucker, a former brick mason and Navy man for three years, 11 months and 27 days.

Although he and Thomas aren’t that busy now, they still get a steady flow of patrons that arrive 9 a.m. to 5 p.m. every Monday, Tuesday, Thursday, Friday, and Saturday. Saturday is the day Thomas’ 42-year-old daughter, Portia Thomas, a case manager and part-time barber, commands the second barber’s chair. Thomas stands at the first, and Tucker takes his place at the third.

Jessica Scott, a 37-year-old transplant from Fayetteville, N.C., had her three sons styled by Thomas and Tucker. She found Friendly Barbershop about a year ago after she typed “barbershops near me” into Google. When Friendly Barbershop popped up in the results, she decided to bring her sons to Thomas and Tucker because of the lofty reviews they received from contented customers.

“This is a calm place,” Scott said. “I’ve been to other barbershops with my boys, and they get crazy with the music and language. Also, a lot of people that come in and out of those barbershops sometimes look sketchy.”

On this June morning, she watched as Thomas and Tucker worked their barbering mojo.

Her 12-year-old son, Isaiah Turner, got a Mohawk from Tucker. Moments earlier, his oldest brother, 15-year-old Caleb Turner, who wears his thick hair in twists, let Thomas trim down his sides. Aiden Hemmingway, the youngest at 5, got what Thomas calls “an even all over,” which is simply a cut that requires the hair to be the same length everywhere.

“Caleb loves her,” Scott said. “He doesn’t want to go anywhere else, but here.”

He is not alone.

James Lewis, 61, has been coming to Franklin Tucker’s chair for at least 55 years. After Tucker cut his hair, he trimmed his mustache.

Tyrell Denney, a 22-year-old Coastal Carolina University student, drops in on Saturdays. He enters each time looking fresh from head to toe. His sneakers are always spotless. His socks are bright light white. His shirt and polo shorts are dry-cleaned crisp. His fashion style is on point. Denney is fly.

“Friendly Barbershop is always positive,” said Denney, a Conway resident who has been sitting in Thomas’ chair since the sixth grade. “It has a good vibe. You come in, and you can learn about life. You can be taught. I just soak up the knowledge like a sponge.”

When Thomas was done with his low bald fade, which means the cut calls for bald sides with a little hair on top, he looked ready for a hot date. He paid and left pleased.

Several had lots of hair. Certain ones had just enough to keep baldness at bay. The scenarios of heads kept changing.

Constant, however, is the fact that hair is here to stay and Thomas and Tucker have the talent and tenure to keep up with the cuts. 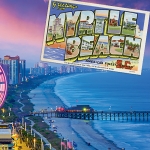 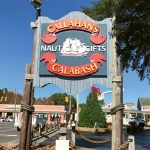