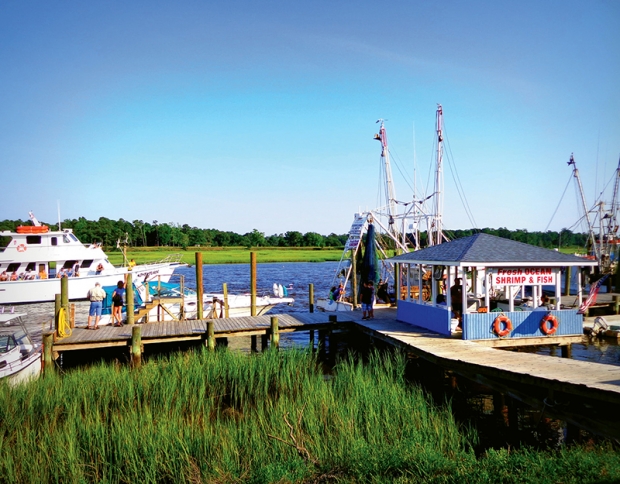 To the vast majority of Grand Strand locals and visitors the name “Calabash” means one thing: buffets brimming with fresh seafood served “Calabash style.” That is, lightly coated in cornmeal, or battered, and flash fried. But to those who live and work in the small but growing town of Calabash, North Carolina, just a short hop over the state line, the name means much more. As a part of Brunswick County, one of a number of fast-growing regions in the U.S., Calabash is enjoying a steady uptick in its permanent resident population (11 percent over the last six years); a renaissance in its restaurant districts; a notable arts scene; antiques, consignment and thrift store shopping and a gift store megalopolis, all while retaining its quaint hometown charm tied to its nearby waterfront and centuries-old fishing traditions.

Though dozens of restaurants along the Grand Strand, especially in Myrtle Beach, long ago borrowed the Calabash name to promote their own businesses, they owe their success to the small town just up the road where it really all began—and continues to this day. Of the several dozen restaurants in Calabash, including an assortment of sandwich shops, pancake houses, a deli, a bagel shop and pizza joints, there aren’t as many “Calabash” restaurants still open out of the original 23 at the town’s peak in the 1980s. The ones that remain do a brisk business and have been delighting their patrons for decades.

The start of the seafood restaurant industry that would promote the Calabash name internationally began humbly in the 1920s under moss-laden live oaks, where oyster roasts were held regularly outside on the riverfront. If the weather didn’t cooperate, they’d move inside to simple open-air wooden barns with sawdust floors filled with long rows of tables and benches. These weekly roasts drew hundreds of locals and a few in-the-know visitors, the town’s first foodie tourists. The menu: typically an oyster roast consisting of a pot of several dozen steamed oysters, cornbread and beets. The price: twenty-five cents.

Like Little River just a couple of miles south and Murrells Inlet 45 miles south, Calabash sits along a natural, protected inlet. Here the brackish and tidal Calabash River offers safe harbor for a small fishing fleet that plies the Atlantic Ocean and nearby creeks. Named for a gourd originally from Africa, references to the Calabash settlement date back to the 1800s. Long before that it was Pea Landing, appearing on maps from the 1600s. Paleo-Indian Native American groups fished the very same waters dating back to 10,000 B.C.

Take Me To The River

As it has for centuries, today the heart of Calabash still beats strongest at its waterfront. In its post Civil-War era, fishermen returning with shrimp, oysters, flounder, snapper, tuna, grouper and whatever else may have been in season and biting camped on the shores and celebrated each bounty with a fish fry. Then came the oyster roasts, then the tourists, and then more restaurants and more tourists. Each year well over 1 million tourists wind their way off of U.S. 17 to partake.

In the 1940s and 1950s Calabash grew in the lexicon of American catch phrases thanks to Vaudevillian turned radio star, Jimmy Durante. Legend has it that Durante and his wife stopped in Calabash while on a driving tour of the U.S. His wife was so taken by the town he nicknamed her “Mrs. Calabash.” Local legend spices up the story with tales of a dalliance with local restaurateur, Lucy Coleman, supposedly the authentic Mrs. Calabash. Regardless, Durante closed each of his radio (and later TV) performances with “Good night everyone, and good night Mrs. Calabash, wherever you are.”

On any given day the waterfront bustles with commercial fishermen, along with locals and tourists in for lunch or dinner at any one of a handful of riverfront eateries, feasting on the freshest locally caught seafood you’re likely to find anywhere. Fish and bait shacks outfit recreational fishermen and cook up baskets of fried seafood on the spot. Serina Taylor and her husband, Robert, own and operate The Waterfront Seafood Shack Market & Eatery, along with the Calabash Fishing Fleet, a family business since the late 1950s.

“As you can see, it really is a shack,” said Serina Taylor, smiling while standing behind the counter of her open-air fish market/bait shop. Though still off-season, on my 10-minute visit she served two fishermen buying head-on shrimp too lovely to be used as bait. The shrimp had been caught and put on ice less than 24 hours earlier. “In the summer, people sit out here under our umbrellas,” said Taylor. “Some will order food to carry out; we get everybody. It’s a busy little place and what we offer changes daily.”

In addition to the fish mongering, the Taylors operate fishing charters and their own commercial fishing fleet. “I think we have six boats out right now,” she said, “and we also do dolphin cruises, Waterway cruises, Gulf Stream charters, anything on the water.” The day we spoke, Taylor had two boats out fishing for king mackerel. “They’re probably 40 miles out and will be gone for three days.” Her crews are made up of the hardcore rough and tumble fishermen you’d expect. It’s not an easy way to make a living, but few would trade it in.

Flanked by large restaurants on either side, Taylor’s Waterfront Seafood Shack has garnered the 2017 #1 TripAdvisor Favorite Calabash Restaurant honor. Their seafood is super fresh, and that makes all the difference. But there’s more to Calabash than its waterfront.

Leading away from the waterfront, River Road is loaded with pizza shops, old beach-style mom and pop motels, decades-old restaurants (including Ella’s of Calabash, which was established in 1950), and a variety of other businesses, including a real estate company, a small engine repair shop, and comforting small-town independent businesses chugging along in the day of chains and big box retailers.

If the waterfront district at the end of River Road is Calabash’s heart, then its soul resides at the corner of Beach Drive (NC 179) and River Road where Callahan’s of Calabash reigns supreme. Enchanting young and old for 40 years, Callahan’s family-owned-and-operated gift shop is something to behold. Within its 35,000 square feet (10 times larger than when they first acquired the building in 1978), customers shop for nautical gifts, boutique jewelry, fine art and rekindle their spirit at St. Nick Nacks Christmas Shop, where it’s Christmas year-round.

The sprawling old wood-framed building is home to tastefully displayed, tourist-oriented curios, but also has room after room of collectibles, home decor and distinctive gift items. It’s a safe bet that most of Calabash’s throng of annual visitors inevitably find their way to Callahan’s.

Eric Callahan, 39, is Callahan’s general manager. He’s seen firsthand how business has grown in the store his family opened the year he was born. The third generation to run the enterprise, he noted that Calabash is essentially the same place he remembers as a child. “This is a quaint little seafood town and it hasn’t changed all that much,” he said. “But we do get a lot more year-round traffic than my dad and granddad saw at first.” Many come just for St. Nick Nacks Christmas Shop. Located at the far end of Callahan’s, it’s a year-round wonder of dazzling lights, dozens of fully bedecked and bedazzled trees and some 3 million Christmas ornaments. They’ve made just enough room for Halloween and St. Patrick’s Day selections as well.

The fourth generation of Callahans, Eric’s son is just five years old but has already staked out his favorite part of the store. “He loves Nick Nacks,” said Callahan, “and when I walk through with him and he lights up, it gives me a different perspective on what we’ve got here.”

Next to the gift shop is another Callahan family enterprise, The Boundary House Restaurant, a sleek, modern eatery and one of the few big restaurants in town that doesn’t have “Calabash” plastered all over its signage, though to be sure the menu is loaded with plenty of seafood items.

“We’re [remodeling] and opening a waterfront restaurant sometime in 2018,” continued Callahan, whose family also owns Clark’s Seafood & Chop House in Little River. In early 2017 the family and a partner purchased what was Coleman’s Original Calabash Restaurant, an iconic 77-year-old eatery sitting along the docks at the end of River Road. “Of course we’ll have a few fried seafood options, but we’re really wanting to do something different down there and appeal to a younger demographic. Calabash already has the home-fried seafood category well covered.”

Restaurants and gift shops aren’t the only draw to this unusual town, one that can be easily missed by travelers who won’t know what they’re passing up unless they exit the highway.

An unusually large number of thrift shops, consignment stores and other purveyors of “gently used” goods line Beach Drive in the downtown region of Calabash, making it a bargain hunter’s paradise. An antique shop or two round out the offerings for those looking for that atypical pre-owned something or another.

Also unusual for a small town off the beaten path, Sunset River Marketplace is a 10,000-square-foot showcase art gallery, frame shop and teaching center with room after room of fine art, folk art, pottery and exquisite works from local and regional artisans of every discipline. Now in its 16th year, the gallery offers art classes, book signings and other events.

In the 1990s, Calabash was twice its current geographical size until a bitter feud over sewers and signage caused a rift, which led to secession in 1998 by those living in what is now the town of Carolina Shores, a mostly residential area with its own mayor and town council. Signs of the battle are mostly all gone, with Calabash and Carolina Shores sharing fire and emergency services. Both townships are growing along with the rest of Brunswick County.

“We’re seeing younger people move in around the area,” said Callahan, “and every town needs that. Carolina Shores, Kingfish Bay, lots of the developments are really growing after a down period. [At Callahan’s] we’ve seen steady sales growth every year over the past five years, and it’s not just us. The whole town is doing well.”

Callahan and others are optimistic about Calabash’s future. One hopes the town won’t change too much or too quickly, but just one visit to the docks where the seagulls screech, the bald eagles soar overhead and the fishing boats come and go, adds confidence that everything in Calabash moves at the pace intended.

“Good night, Mrs. Calabash, wherever you are.” 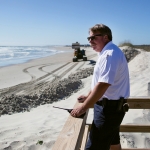 Served with Honor, Retired with Pride