Anyone who’s ever had a casual conversation with Justin “Buz” Plyler, the owner of the iconic Gay Dolphin Gift Shop in downtown Myrtle Beach, knows it’s like talking to your favorite uncle. A classic movie star square-jawed face topped with gray and black hair and a closely trimmed white beard are the canvas for a wide, genuine smile, hiding curiosities and a lifetime of memories not unlike the store he owns and operates.

While his thoughtful speech and gentle demeanor are the norm, he’s known as a fighter who will stand up for what he believes. Plyler, 67, survived a horrendous automobile accident 10 years ago, the loss of his wife, Susan, four years ago, and has spent a lifetime in the family business. Though a gentle spirit, Plyler is a strongly opinionated community leader who knows more about downtown Myrtle Beach and the tourist industry than most. He has a strong sense of what works, what doesn’t work, and why, and he will happily share with anyone who asks. But mostly he’d rather kick back and tell tales from the old days.

“My mother [Eloise] married at 13, had a baby girl at 14 and was divorced at 15,” said Plyler. “She got a job as a beautician and saved enough money in the 10 years before she married my father, at 25, to go into business. Both my mom and dad were great business people. Mom had a great skill for display and keeping things clean. I had a knack for buying. I could negotiate without pissing people off.”

Plyler says his family lore dates his local ancestors back to the late 1600s. Both of his parents passed away in the last decade or so, Eloise in 2009. In 2005 the City of Myrtle Beach named a park for the Plyler family located one block north of the Gay Dolphin on Ocean Boulevard. Directly on the Boardwalk, Plyler Park is home to a summer concert series, the SkyWheel and a flurry of spring, summer and fall activities.

The Gay Dolphin was first opened in 1946, and the store, open 363 days each year, has gone through a few changes and survived a few tragedies. True entrepreneurs, the Plylers not only rebuilt after Hurricane Hazel destroyed the first gift shop in 1954, but they also owned and operated a small amusement park and a wildlife exhibit. “We had free shows with live monkeys, parrots and a gorilla,” he said, reminiscing back into his childhood of the 1950s.

As a young man Plyler became owner of a large number of self-recording kiosks at amusement parks all over the country during the cassette-crazed ’70s and early ’80s. Patrons would sing over karaoke tracks and have the automated machine deliver a prized recording for $10. Successful at first, their maintenance became problematic. Plyler eventually sold the “recording studios,” as he calls them, and continued his focus on the Gay Dolphin.

“I’ve been lucky in my life in that when presented with a problem, I can usually figure out a way around it.” Though proud of his accomplishments and of the iconic status of the first year-round tourist shop in Myrtle Beach, he remains humble. When asked about what he saw coming over the next 10 or 20 years for his business and for Myrtle Beach, he answered with the same humor and humility evident in most everything he says. “Dad had a wonderful ability to see around the corner and into the future. I do not.”

Plyler’s two sons, Hank and Sims, work and reside out of the area. “Neither one of them really enjoyed the shop,” said Plyler, with a smile. “The work can be menial, repetitive and demeaning,” he laughed, “and it was tough to be raised in it. It’s become a very antiquated profession. Hopefully someone we train will have the ability to take the shop forward. I’m not planning on retiring, but at some point you’re going to die, and when you kick-off you’d like to leave with something in place.”

Plyler seems to feel not only a sense of obligation to his staff and the legacy of the store, but to his customers, some of whom have been shopping there every summer for 60-plus years. “I—we all—[our customers] have a wonderful, sentimental attachment to the Gay Dolphin. You’d be stunned at some of the nice letters and kind comments we get. It’s a bit of a surprise in this digital world that we survive, but this dusty old place holds so much sway with these people. I’ve been in retail stores in India and China on buying trips, and the old curiosity shop will never go out of fashion.”

Post Hurricane Katrina liability insurance made the store’s six-story spiral staircase glass observation tower too expensive to keep open, though it’s still plainly visible from the street and the sand. It closed to public climbing in 2006.

The Gay Dolphin sits as a steadfast reminder of the early days of Myrtle Beach, when the “boardwalk” was a concrete sidewalk, often in disrepair. “I pushed hard for the new Boardwalk,” said Plyler, “for the last 40-some odd years. I had pretty much given up until we found ourselves in that [mid-recession] shovel-ready project mentality. I wasn’t expecting what a great job they would do when they finally got around to it. Our [old Boardwalk] was probably one of the least attractive parts of Myrtle Beach. Now it’s become a tremendous asset. The city fathers have made good choices on understanding just how fragile an economic property Myrtle Beach is. We’re totally dependent on one industry, and it has to work.”

About 10 years ago Plyler nearly lost his life in an automobile accident where he was thrown from the Tahoe he was driving. His injuries were so severe they required an induced coma for two weeks and 30 days in ICU. Then came the long road to recovery, which he credits, in part, to his day-to-day activities at the Gay Dolphin. “I had broken ribs, a collapsed lung, brain swelling, my diaphragm had burst. I was a mess. They gave me very little chance of survival, but as it turned out I recovered and can’t really tell it ever happened. This job [at the Gay Dolphin] is a series of menial tasks, which turns out to be very much like the physical therapy they were putting me through—eye-hand coordination, simple mental tasks—and they were beneficial in my recovery.  I am grateful to be here.”

By his own admission Plyler cannot tell the future, though he seems cautiously optimistic about the direction in which the downtown Myrtle Beach area is headed. Far from retiring, Plyler will likely weather whatever storms may come his way. The Gay Dolphin Gift Cove and its patriarch have settled in for the long haul. 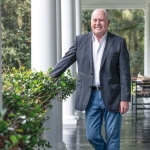 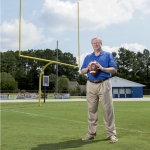