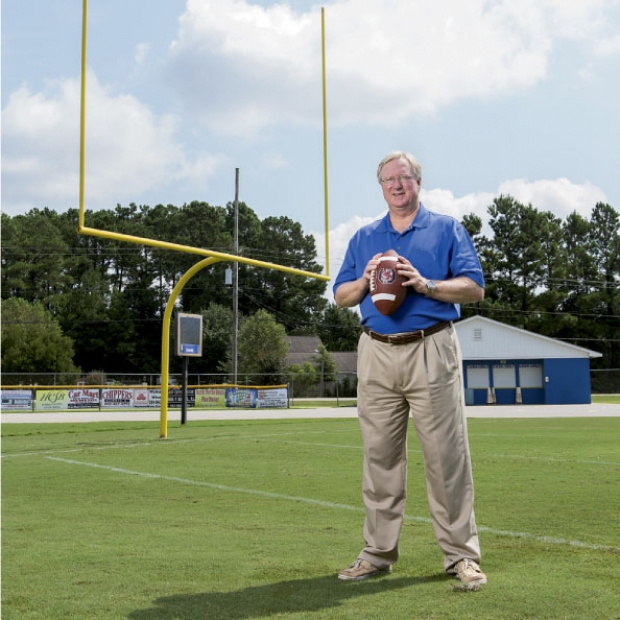 A  few of us are fortunate to have memories of being a revered high school athlete: the game night lights, the high fives in the school hallways, the recognition in the local newspaper. Some have the bonus opportunity of reliving those memories years later at a homecoming event or reunion of high school friends. For North Myrtle Beach resident Ron Bass, however, re-creations of those high school football days keep popping up, echoing like a refrain from an old song.

Bass played football in Alexandria, Virginia, for the T.C. Williams Titans, a team that won the Virginia AAA state high school championship in 1971. He went on to attend the University of South Carolina on a football scholarship, where he excelled as a quarterback, earning the starting position his junior and senior years. After college, Bass become a sports announcer for ABC and later moved into the advertising industry. He married Susan Carol Walsh in 1985 and was in the process of living his life and raising his three children—Alexandria, Lindsay and Ronnie—when the first round of “Glory Days” started playing.

Screenwriter Gregory Allen Howard contacted Bass to inform him that a film version of T.C. Williams’ 1971 season was in the works. A couple of years later, the blockbuster Remember the Titans was released, and Bass once again started hearing the moniker he thought he had left behind: his high school nickname “Sunshine.”

When Bass, who was living in Greenville at the time, traveled to Los Angeles with the handful of players featured in the movie to attend the West Coast premiere, the past reverberated all around him.
“It was surreal to sit back and watch” his high school days play out on the big screen, Bass says. “We just really couldn’t believe that someone had picked up on the story and made a movie out of it.”

Bass’ character, played by Kip Pardue, is a long-haired surfer-type kid who moves from California to the newly segregated, racially charged atmosphere of T.C. Williams High School. Initially, he has a rocky time finding his place on the team as he enters the scene midseason and threatens other players’ positions. However, his amiable personality (hence “Sunshine”) and athletic talent helps him win the trust of other players and play a key role in overcoming the racial tension that grips the team and the community.

While the movie’s overall themes are accurate, Bass says, many details were altered or created to fit Howard’s vision and the film’s box office appeal. Tension and animosity did play a major role in the football team’s development, but it was more complex than depicted.

“You had three schools coming together, not two,” Bass explains. T.C. Williams incorporated students being transported from the George Washington district, which was mostly black, and Hammond, which was mostly white. “It was the first year kids were bused to districts outside their own,” Bass notes. “The worst problems came from some of the students from rival high schools that hated each other.”

On the football team, clashes derived from the blend of talent and egos when athletes from three districts were suddenly forced to compete for a position on one team.
“The competition was pretty stiff,” Bass says.

However, Bass says, he was not received with hostility upon his arrival from California, as the movie portrays, and most decisions about positions and pecking order were worked out by the first day of school. The football players became leaders in advocating tolerance in the school, where fights broke out often.

“Coach Boone would have pairs of black and white players wear their jerseys and patrol the halls instead of going to class,” Bass recalls.

Reactions to Sunshine’s film character, though, often focus on other details. Disney fabricated two segments in which Gerry Bertier hurls the name “fruitcake” at Bass when he first appears for practice with long hair, while the rest of the team has closely cropped cuts. Later, Bass retaliates by kissing Bertier in the locker room.

“Everybody always wants to know about that,” Bass says. “Neither of those scenes happened.” Also, ironically, Bass did not have long hair when he arrived at T.C. Williams; the other team members did. “I eventually convinced my dad to let me grow it,” Bass states, “just to fit in.”

More personally, Bass was pleased with the actor who played him. “[Pardue] did a good job,” Bass says. “He looked like he knew what he was doing on the field.” Susan Bass, too, enjoyed the portrayal of her husband. “She went to the first showing and said she was ready to trade up,” he quipped.

The release of the movie brought Bass some notoriety as local media picked up his story and a speaking circuit offer came his way. His children, too, felt the breeze of stardom.

“I remember being in elementary school during recess,” Ronnie Bass, Jr., now 16, recalls. Everyone would call, ‘Ronnie Bass!  That’s Ronnie Bass!’ Growing up, I always thought it was cool that my dad was Sunshine.”

After Remember the Titans placed a spotlight on the elder Bass’ football career nearly two decades after the fact, the second wave of nostalgia began last year when Ronnie Jr. joined the North Myrtle Beach Chiefs football team as quarterback. He earned some playing time last season, and this year he starts for the team.

“It is exciting,” Ron says of his son’s unfolding football career, “and I’ll use the word ‘surreal’ again, to be sitting up there and watching him with the same number on.”
Lew Lastik, or “Big Lou” from the movie, remains close friends with Bass and sees a bright future for the second generation.

“If his son turns out to be as good a player, or as good of a person, as his dad, we’ll have another great Ronnie Bass,” he predicted.

So, like a familiar melody, the high school football career of Ronnie Bass seems to be set to “replay”—and perhaps, in the near future, we’ll even have a remix in the works.