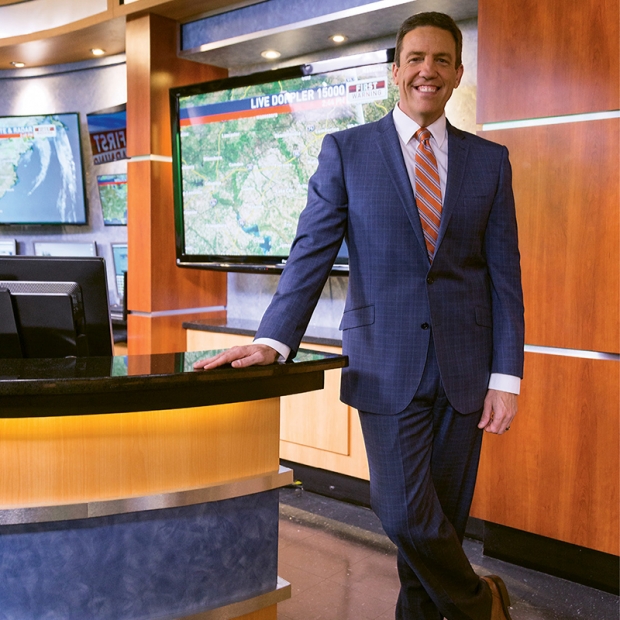 WPDE chief meteorologist Ed Piotrowski stands as a pillar of strength through our local storms.

Chief meteorologist Ed Piotrowski is like a ray of sunshine through even the most ominous of storms. But don’t mistake that to mean that he plays up or makes light of a serious situation. Let’s just say he clears the clouds of sensationalized confusion that we’ve all been bogged down by lately.

And that’s why he’s loved and trusted by his millions of viewers both day and night, and twice named South Carolina Meterologist of the Year by the South Carolina Broadcasters Association.

“To me, the most important award is the acceptance from our viewers. Then I feel successful,” says Piotrowski, looking TV-ready in a tailored suit in WPDE ABC 15’s conference room. “I was very proud of the award, but, ultimately, it’s what the people at home think of me.”

Public acceptance is an understatement when it comes to Piotrowski. He’s been considered the voice of reason in front of the green screen for the past 25 years. And lately, that’s been vital, with an active hurricane season that put our coastal Carolina area in the destructive paths of Hurricane Matthew in 2016 and, just in September, Florence. Millions tuned in to either his live TV broadcast or Facebook Live streams to seek his advice on hurricane prep, evacuations, the projected path and the aftermath of cleanup. More specifically, Piotrowski says his Facebook stat insights show that from September 8–30 his posts had 7 million views and his videos, 6 million. He also answered all of the 2,440 questions he received via Facebook messenger.

“I guess that comes from my mom and dad, who instilled in me to never blow anyone off,” he says.

Piotrowski grew up as a military brat, moving from town to town throughout his dad’s 30-year career with the Marines as a master gunnery sergeant E9 with covert helicopters. He was born in Hawaii, lived in south Texas for a while and house hopped throughout the South. Nicknamed “Special Ed” in high school, Piotrowski says he gets his even-keeled manner in stressful situations in the field from his dad.

“I saw how he handled very difficult situations, like helicopters he worked with that crashed and people died,” he says. “I just saw how it wasn’t panic, but a very controlled environment on how they decimated that information. I mean, he wasn’t the Great Santini, but we knew in church by the way he looked at us if we needed to straighten up!” 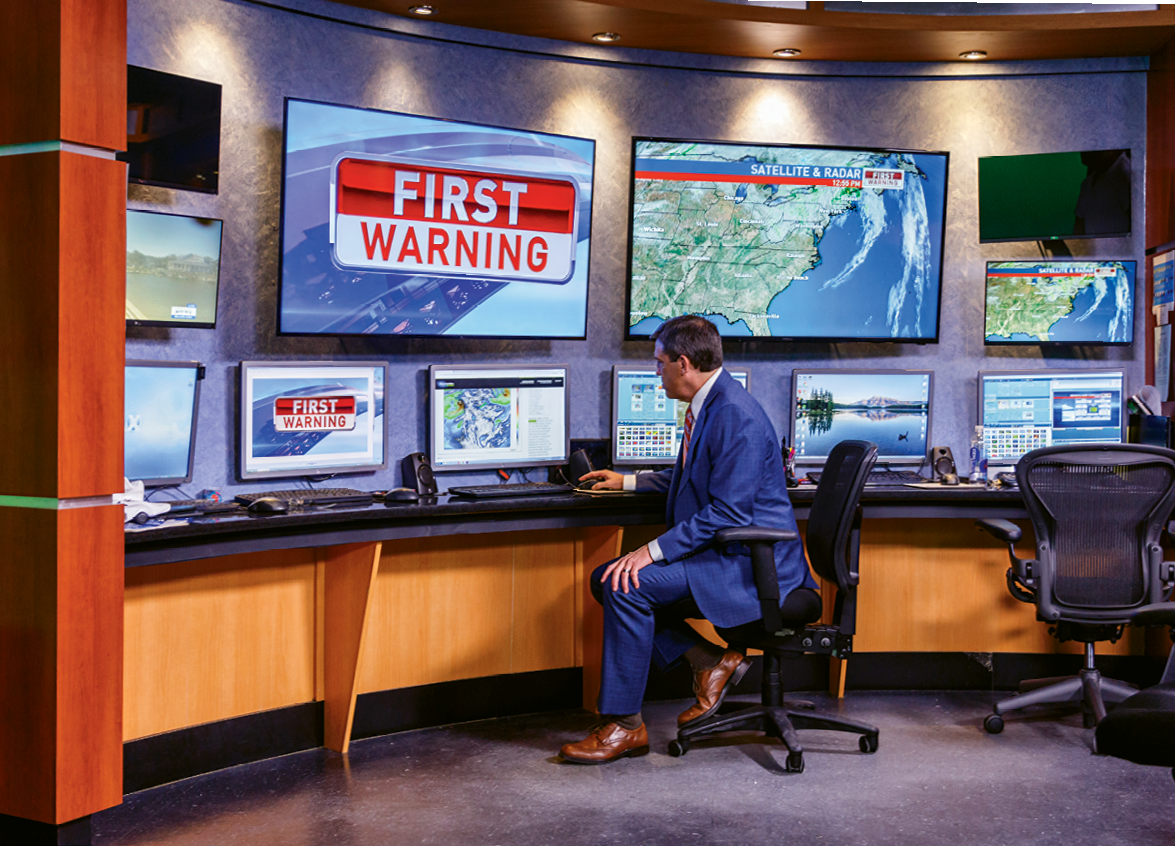 During Hurricane Florence, Piotrowski hunkered down at the news station to work 102 hours in seven days.

Piotrowski’s passion for weather was innate. “As far as I can remember, as a kid, I just always absolutely loved the weather,” he says. “I just never knew if I wanted to do weather on TV.”

But he did know he wanted to pursue a career in meteorology, so he majored in the science at North Carolina State University, the closest school to where his dad was stationed in eastern North Carolina. After Piotrowski interned for two years at a local station in New Bern, North Carolina, he finally caught the TV bug. In 1990, with a supply of demo tapes and a bachelor’s degree in meteorology in hand, he rose up the ranks at the local station in New Bern, but decided to transfer here to ABC 15 in Myrtle Beach in 1994. And, with a 25-year tenure, he has no plan to leave.

“Anyone else who is young in this business would’ve wanted to start in a small market and then move on to a bigger one, but all of my family lives in the Carolinas and I just fell in love with the area,” says Piotrowski. “I just don’t have any dream to go on anywhere else. And when you’ve established yourself, it’s easier to stay rather than having to prove yourself or start over in a new location.”

Piotrowski, 51 (52 in December), has certainly established himself as a weather god in our area, but he says he never rests on his laurels.

“With every single weather event, it’s as though it’s my very first time. Because I know there are sometimes people who have never seen me before and they’re looking for information to help them prepare,” he says. “I take a very no-nonsense approach to how I do the weather and don’t sensationalize anything. I always try to be the voice of reason.”

It’s his voice that’s heard loud and clear over the noise of other weathercasters who may try to sensationalize a storm for the sake of ratings.

“I mean, people aren’t stupid. You may get away with it once, but then people know you’re an alarmist and it’s over,” says Piotrowski. “I have a family and a house, too, and I get a little nervous and I have to prepare my family, so I know what others are thinking: Give me the information I need, tell me the impacts, and help me prepare.”

In preparation for Hurricane Florence, he boarded up his home (which made his neighbors nervous) and made sure his wife, Cindy, and his mom and dad, who live with them, were safely evacuated before he hunkered down at the news station.

“I just can’t take a chance of something happening and I’m not at home, so I probably over-prepare to be on the safe side,” says Piotrowski. “I’m a firm believer in that no one has ever complained because they over-prepared. The other way around is disastrous.”

Piotrowski, however, stayed put to work 102 hours in a seven-day period from the weather office that he says has a nice recliner and showers in the bathrooms.

“It’s not for the glory, because who wants to go through a hurricane without sleep?” he says. “I just genuinely care about what’s going on and people not knowing what’s going to happen.” 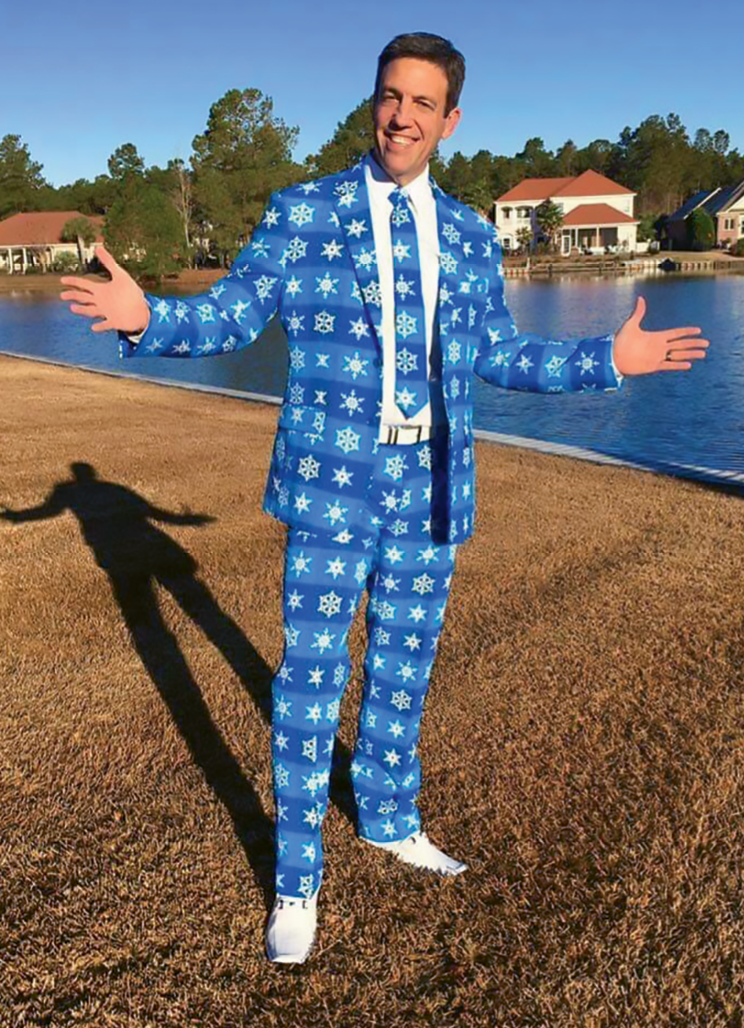 And no amount of weather technology or satellite map is going to soothe the high anxieties of those in the path of a potential Category 5 hurricane.

“My general manager has said for many years that people watch for people,” says Piotrowski. “You can have all the best technology in the world, but in the end it’s that face-to-face interaction that matters more than anything else. It’s your personality and your connection with the viewer. … Information empowers people; if they understand, they feel better prepared to make a decision.”

However, the humbling part about his job, he says, is the continued limitations of the science.

“There’s been a tremendous amount of progress made in forecasting and the technology is a lot better,” says Piotrowski. “But, in the end, you still can’t sample the atmosphere around the entire globe perfectly. So, in other words, for our forecast models to work, we need a perfect picture of what’s going on in the Earth now. But three-quarters of the Earth is water, and no one is living on water, so we have very little data over the ocean.

“Inherently, there is going to be error in any forecast,” he continues. “Our job is to understand when those models are most likely wrong or when we see certain patterns set up that we can then apply to our area. … I’ve learned that you can try to be a hero and swing for the fences and try to get a homerun with a forecast that’s right five days out, but, more often than not, you’re going to be a zero, not a hero. I’d just rather be honest with people and let them know that I’ll know more closer to the time. And I refuse to do any sort of promo about bragging about getting something right. ... You’re going to be wrong.”

When Piotrowski isn’t preparing viewers for the unknown in the atmosphere, he makes about 150 appearances each year at schools, charitable events for organizations like the American Red Cross, and festivals. When he has any sort of downtime, he likes to just lie on the couch and watch football or take photos of lightning, sunrises and sunsets.

Piotrowski says he doesn’t have retirement in his forecast anytime soon—maybe by 61.

“I feel like I’ve done it all and have accomplished what I wanted to even if I walked away from it tomorrow,” he says. “But I just love my job. I love to be that person to tell you what’s going to happen with the weather.”

And we love that he’s here to make that happen for us.