Every cloud has a silver lining. And when it comes to the hurricane clouds that tumultuously gather and rotate our way this season, that silver lining shines in the silvery writer’s voice of Mark Malsick, severe weather liaison in the Climate Office of the South Carolina Department of Natural Resources.

Malsick lives in Blythewood, S.C., an easy commute into the office in Columbia; nowadays, however, he keeps his eyes on the radar remotely from home—and his eyes are always scouring the waters along our coastline to see what’s brewing. But even when there’s nothing “exciting” in the weather world, he still has a way with words, like this weather alert he sent out to the world from August last year:

“Crickets. Tumbleweeds. Tropics. Tropical easterly waves remain in the stealth, convection free mode (akin to Ed Brennan’s Bondo-encrusted ’77 Ford Granada; but, I digress…) with two minor exceptions: A juvenile wave with deep convection rolls off the coast of Africa destined for a stern talking-to over eastern Atlantic waters, then poof-pfft-gone, no harm no foul for the State. The National Hurricane Center (motto: “There’s a cloud, here’s your name”) has been all moony-eyed over the glob of misshapen convection over the Bahamas, giving it an underwhelming 20% chance of becoming a tropical cyclone in the next five days. …”

Malsick served 15-plus years in the U.S. Navy aboard the USS Nimitiz (right) and the USS Theodore Roosevelt (left).

When Malsick first started his job at the SCDNR in 2005, the state climatologist at the time had in place a: “kind of informal internal office/inter-agency memo/email deal concerning whatever storm was out there,” according to Malsick.

“And she says, ‘This is yours now.’ … It landed in my lap two or three days after I got the job,” says Malsick.

“This” was the weekly Severe Weather Alerts, which was once a slow-moving system contained to an audience of about a couple hundred weather geeks. Now, since Malsick was passed the weather alert torch, the email list has exploded into 28,600 subscribers worldwide—even as far as Australia (and that doesn’t include fans that forward them to their friends).

“It’s kind of crazy to get emails from people in Australia who say they like it,” says Malsick. “I figured I’d just do it until they tell me to stop it, so I approached it with a little bit of humor, and just keeping it short and sweet because during hurricane season or anything severe, people get pounded by weather news and kind of get over weather.”

It’s a job Malsick was trained to do—well, sort of—while serving 15-plus years in the U.S. Navy as a former oceanographer and meteorologist briefing fighter pilots on weather patterns aboard nuclear-powered aircraft carriers USS Nimitz and USS Theodore Roosevelt.

Originally from Connecticut, Malsick joined the Navy in 1985, traveling coast to coast at the helm of the aircraft carriers and eventually joining the physical oceanography and meteorology program and enrolling in grad school.

“They insist that, after so many years, you have to go to grad school and, unfortunately, the grad school is in Monterey, California,” he says. “Oh, darn.”

He retired as a Lieutenant Commander from the U.S. Navy.

With his coast-to-coast meteorology experience, covering our state’s 200-mile coastline along the Atlantic seemed to be a natural career step for Malsick, to avoid staying too idle in retirement. And he’s created his writing background on his own.

“I think, probably judging by my performance on the SATs, that part of the brain is a little bit more developed than the math side,” he says. “It always kind of came a little bit better for me.”

Malsick says he looks at the tropics as early as April because the season itself is “arbitrary.”

He generally sends out his severe weather e-bulletins on Thursdays, but it’s an everyday workday routine to keep up with all the models. Overall, it’s a lot of behind-the-scenes work before, during and after impending severe weather. Malsick says he starts looking closely at the tropics as early as April, because the season itself is “arbitrary.”

“You have to start early just to see where sea surface temperatures are going, and then the general pattern of the atmosphere above it,” he explains.

Malsick gathers his data and, through the wizardry of his weather wordsmithing, brings the mundane reports to life in prose churning with both beautiful descriptions and personification, as well as a punch of tongue-in-cheek humor and pop culture mentions. It’s the perfect storm of information and entertainment that catches the attention of weather-watchers worldwide and seriously advises South Carolina’s senior officials and Emergency Management Division on their decisions.

For example, here’s a snippet from a recent April 23 eblast during the pandemic:

“Expect strong thunderstorm activity starting today after 2 PM and clanging until 9 PM. After midnight, a pre-frontal trough (the trailing cold front for those keeping score…) triggers a round of pre-dawn thunderstorms as it crosses over the state. Abject fear of the dark lessens the severity of this second round of thunderstorms. Storms clear the coast a tad after 8 AM making for a clear and sunny Friday. … This weekend, a weaker round of afternoon/evening thunderstorms with perhaps a whiff of hail on Saturday. Clear and sunny Sunday. Ditto for the Monday morning kitchen-home office commute.”

“I just try to cut to the chase—especially for some of the [state] agencies that I deal with…,” says Malsick. “And, actually, a lot of times, half of my job is telling people what’s not going to happen. And they always kind of put a premium on delivering bad news with just a little bit of humor … but you have to be careful; you can’t really get too crazy. Luckily, a lot of people said, ‘Yeah, this guy’s pretty good.’ Generally, 99 percent of the feedback has been positive, which just makes my head so fat. … I don’t want to say it’s a success, but it works.”

He says he tends to shy away from national weather service interactions, paying attention to the National Hurricane Center and their arson of specialists.

“I think it goes back to the Navy,” says Malsick. “They didn’t do my forecast when I was in the middle of the Mediterranean, so I kind of got used to being able to sort out my own problems and not rely on them. I generally try to work in a bubble and not to be like, ‘What is Charleston saying?’ I may look at them after the fact. I don’t do a lot of close collaborations; I’m much more used to relying on my own web.”

What does he have to say about our 60 miles of coastline on the Grand Strand for hurricane season 2020? 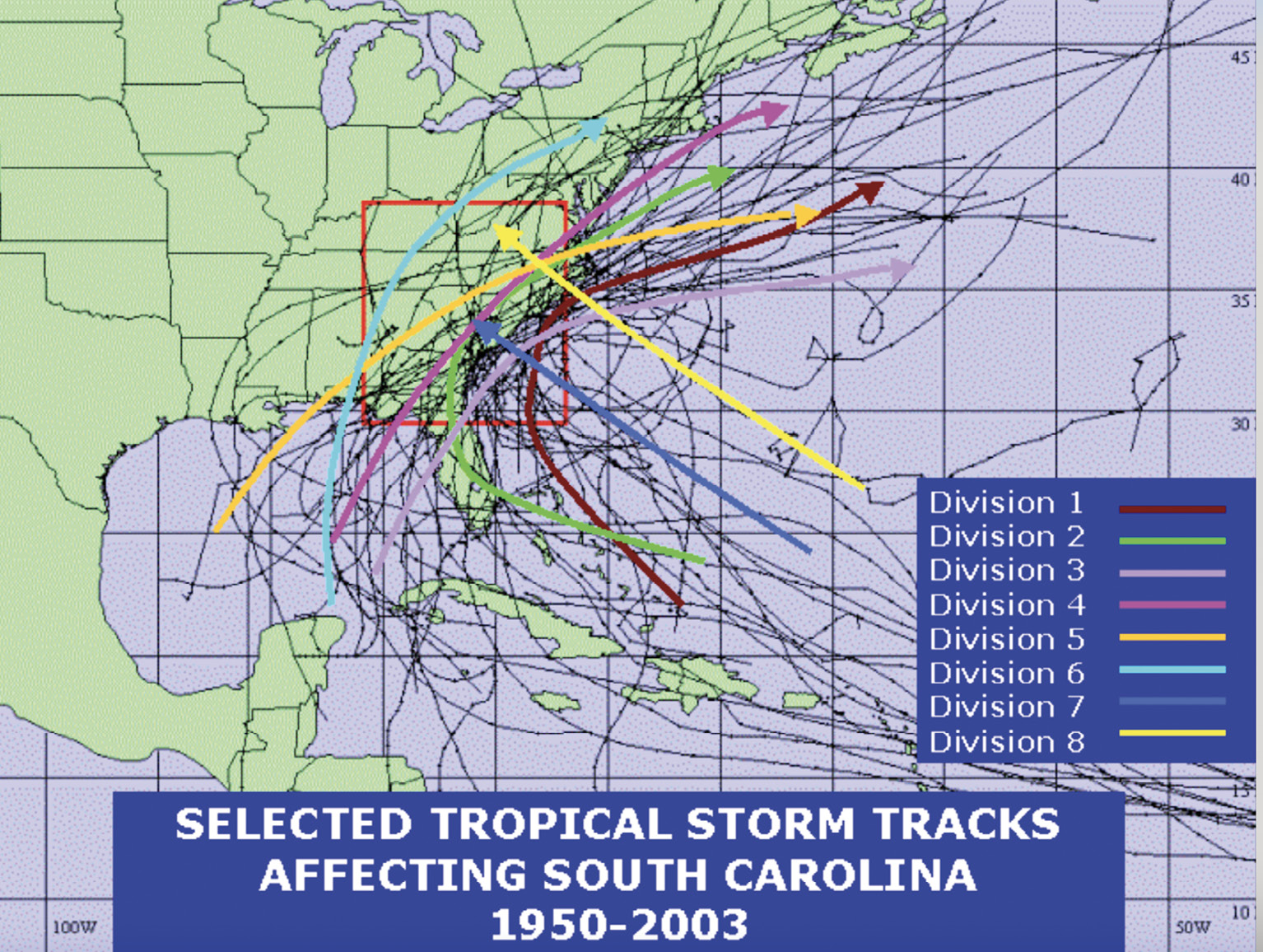 And the plot thickens, as Malsick continues to track and tell the story of our storms in the future.

“I don’t really have a big prediction, but there’s always something to look at in the tropics,” says Malsick. “Especially when you’re living on the coast; it should be a day-to-day thing for people to be weather-aware, whether that’s geeking out on the Weather Channel or online. Right now, there’s so much guidance online, you can drive yourself silly looking at all the hurricane products and predictions. I think the bottom line is to have a plan. You are your best judge of your situation.”

Malsick’s current situation is working from home, chipping away at his wife’s honey-do list, or taking a break to get outside and look at the clouds—sometimes cycling on nearby Fort Jackson.

“I like being stuck at home,” he says. “I guess I got the traveling bug out of the way with the Navy. In the Navy, you’re stuck in a home for like six months at a time with 5,000 of your closest friends.”

In Malsick’s April 16 weather bulletin, he also encourages his subscribers to get outside, like only he can:

“Hospitably cool, dry and clear today, and Friday. Go outside and get uncomfortably social with a tree; or a shrub for you Reformed Druids. … Strong thunderstorms, some possibly severe, are possible before 8 AM Monday morning; however, he says calmly, there is a dearth (ain’t none...) of upper level support for tornadic supercell development like that we experienced this past Monday morning.”

If you’d like to be wooed by Malsick’s words of weather wisdom, subscribe to his weekly emails at: https://public.govdelivery.com/accounts/SCDNR/subscriber/new?preferences=true.