This uncommon ADA-approved enabling playground located within The Market Common is designed for able-bodied and special needs children and their families to use together. Phase I of the four-acre, $3 million project, the largest of its kind in the Southeast, opened in August and celebrated a grand opening and dedication over Labor Day weekend. The playground has already transformed the landscape of Grand Park, showcasing a safe, fun and inspiring place for all of the area’s children and their families, as well as for out-of-town visitors.

“I was out at the [playground] a few weeks ago and talked to a man in a wheelchair,” said Mayor Rhodes, the unstoppable force behind this dream becoming a reality, “and he told me it was the first time he and his children had ever played together at the same playground. That’s what it’s all about.”

The story of those behind this remarkable facility begins with Mayor Rhodes’ brief, but serious illness in 2012. A recovery from a brain aneurism, with a 10 percent chance of survival, led him to ask the question of himself, “Why I am still here? I know there’s more to life than basketball camps and being the Mayor of Myrtle Beach.” This soul-searching turned into an A-ha! moment as he thought about his friendship with the Thompson family and of his respect for the Miracle Leagues of the Grand Strand, which operates organized sporting events for special needs participants. “That was my moment,” he said, “and I had the idea for a place that would be open seven days a week, for free, for everyone, special needs children especially.”

Rhodes approached Lance and Marjorie Thompson, and their daughter Savannah about naming the playground after the girl he’d come to know and who called him “My Mayor.”

“We were thrilled,” said Marjorie Thompson, “and of course said ‘Yes!’” Savannah, now 21 and a senior at Socastee High School, was born with Williams Syndrome and suffered brain trauma during an operation when she was just four years old. In a coma for a month, doctors told the Thompsons that Savannah would never recognize them, would remain bedridden and that the oxygen depravation and trauma to her brain was just too severe to expect much of a life for the young girl. With an indomitable spirit, Savannah proved them wrong. Among her many other accomplishments, she has become a willing and happy spokesperson and the face of the playground that will serve many families for generations to come.

Future plans at the playground, Phases II and III, include a $500,000 Splash Park with a variety of water features and a $300,000 dock facility on the adjacent lake.

A number of designers and engineers were called upon for their time and talents, including landscape architect Dan Lambert, who was with The LandArt Company. Lambert, who was tasked with site layout and work coordination, was in Myrtle Beach through July to oversee the completion of Phase I. He recently moved to Charlotte, but remembers the project fondly. “I was particularly taken by the scale and scope of the playground,” he said. “We’ve got just about every piece of equipment available for inclusive play. I’m proud that the facility allows kids of all abilities to play together and enjoy the same experiences in the same space.”

The recently retired former City of Myrtle Beach Public Works Superintendent, Steve Moore, was also deeply involved in the day-to-day work as a project manager. “Just to see the huge number of people already playing at the park is my greatest thanks,” said Moore.

The Market Common District, located on land once a part of the Myrtle Beach Air Force Base, has become a shopping, dinning and residential force to be reckoned with. The district is also host to the Crabtree Gymnasium, parks, ponds, lakes, a number of baseball and soccer fields and an extensive array of paved hiking and biking paths, many of which are wheelchair-friendly. The paths, already in place, surround and intersect the playground.

“Tom Leath [then City Manager] got me one acre,” said Rhodes, “but then I got kind of carried away and we’ve turned one acre into four. We’re already open with Phase I on two acres, and we’re located in the middle of the best parts of the park, easy to find. I didn’t want this playground to be hidden behind some building.”

Savannah’s Playground is filled with inclusive play equipment, including a ropes course and zipline, an outdoor musical area called “Harmony Park,” traditional playground equipment and eventually paddle boats, a freshwater lake fishing pier and an ADA-approved waterpark. But beyond the beautiful park-like setting and the exciting, challenging and fun equipment, there are families with children just like Savannah Thompson. Actually, no one is like Savannah Thompson—she’s one of a kind.

Savannah has sung the National Anthem at sporting events, helped in fundraising, been interviewed by television news reporters and is a regular at Coastal Carolina University sporting events, where she is treated like a fellow Chanticleer and a hometown hero. She received the Champions for Life Community Service Award in 2014 from CCU. A touching recording of the presentation is the focus of a YouTube video. The accolade was renamed The Savannah Thompson Humanitarian Award and is given annually.

Used to the spotlight, Thompson is becoming media savvy and an old hand at public relations. When asked about her growing public persona, Savannah, with a laugh and smile proclaimed, “Yes, I am famous!,” her dad adding, “and humble, too.” She works part time at Stephanie’s Salon & Day Spa when not at school. “I fold towels, unpack product when it comes in and I greet people,” she said. While work is an important part of Savannah’s life, school comes first, and then the playground. Her favorite activity at the new facility? “The zipline!” she said without hesitation.

Rhodes says there’s still work and fundraising ahead to see Phases II and III come to fruition. Donations are encouraged and can be made on the organization’s website, www.savannahsplayground.org. 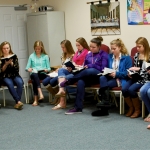