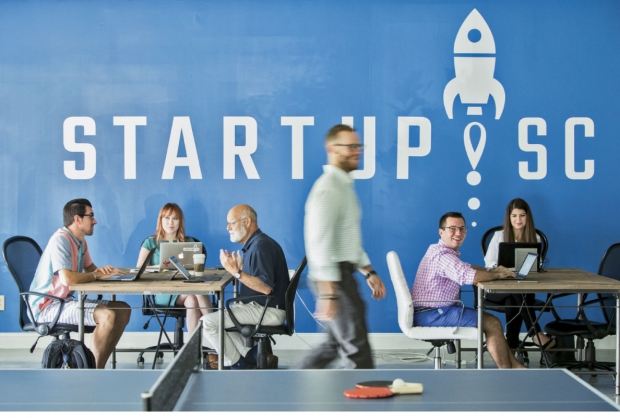 If a picture is worth a thousand words, what is an idea worth? Millions of dollars, if nurtured, raised and reared to grow and expand into a business that heads in the right direction within a resource incubator like Startup.SC.

Even the simplest ideas, if backed by business smarts, passion, drive—and a healthy dose of risk—can rake in the rewards. Take Firehouse Subs, for instance. Two firefighters from Florida decided to open a sandwich shop in 1994 and now own more than 500 locations nationwide that, as of 2011, turned in $284.9 million in total system sales.

Startup.SC—that’s right, South Carolina; not Silicon Valley or New York—is on its way to helping our homegrown idea generators and entrepreneurs accomplish this same financial feat. And it’s not just South Carolina, but here in Myrtle Beach, typically known to the world as a vacation destination with careers grounded in the area’s hospitality roots. In fact, that’s the firestarter of Startup’s promotional campaign, “Why not the beach?”

The nonprofit organization started in 2012 with a space—a co-working space called Cowork MYR—that provided budding entrepreneurs a common office space to gather great minds, share ideas and collaborate as a small tech community. Mike Schroll and Paul Reynolds, two leaders in this community, then saw a bigger opportunity to cultivate these tech startups, so they founded Startup.SC in 2014 as a program of the Grand Strand Technology Council. Ryan Smith, born and bred at the beach, was working at the Myrtle Beach Chamber of Commerce before she was recruited and brought on last year as Startup’s executive director.

“My job at the chamber was to go out to businesses and find out what they needed as far as support,” she says.

What she discovered in her daily travels was Cowork MYR and the wealth of technology support this group could offer. Smith’s continued marketing of Cowork eventually landed her a full-time job with the then brand new Startup.SC. Her role was especially important as Reynolds moved to Florida and Schroll became more involved in one of Startup.SC’s startups, PC Pitstop.

“Growing up here, I would always have lots of friends who would have to move out of the area to get jobs in the digital technology industry,” she says. “Now it’s like we’re creating a big ecosystem for the industry here, but we’re young.”

They may be young, but Startup.SC is quickly gaining ground like a seasoned veteran in the startup field, beginning with a new office space headquartered in Litchfield Beach as of last July. Workspace walls are splashed in sky blue, with the group’s rocket logo blasting off front and center. They sky is the limit, after all.

Following grants and donations from the SC Department of Commerce, Georgetown Economic Development and the Frances P. Bunnelle Foundation, on June 30 Startup.SC received a $35,000 check from Frontier Communications and $15,000 from Boeing as a quarterfinalist of the America’s Best Communities competition. Georgetown County, one of 50 out of 300 quarterfinalist communities, partnered with Boeing for the Adopt-a-Community program, and now Startup.SC not only benefits from the funds but from the corporate sponsorship and valuable mentorship of Boeing’s staff. In November, six months after the initial funds, Startup.SC will find out if their revitalization plans make the cut for the next round to receive an additional $3 million.

Smith describes Startup.SC’s plan as three-fold. First, the entrepreneurial program: something they’ve focused on from the very beginning via their founding fathers to provide community events, educational programs and viable resources for scalable startups. Every Tuesday they host a free Tech Talk at 11 a.m. A guest speaker from the community gives insight into some aspect of technology trends and entrepreneurship. Anyone can attend Startup’s monthly socials via Meetup on the Startup website. And bimonthly, interested entrepreneurs can attend the Startup co-lunch.

For those who want to dive deeper, practice to be pitch perfect at Startup’s 1 Million Cups pitch practice event every Wednesday at 9 a.m. to throw out your idea and see if it sticks with local business owners and Startup mentors. It all culminates with Startup’s annual Pitch Night in November, a Shark Tank process of sorts, where aspiring entrepreneurs pitch their big ideas to an audience of invited business guests, friends of Startup.SC and local investors in Myrtle Beach. Based on people’s choice and Startup’s final say, the nonprofit selects a handful of those startups to take under their wing and provide the necessary business resources to make millions—or $10 million and beyond.

“What folks need to understand is that we aren’t here to run their business for them, but we’re here to lend support,” says Smith. “Some people in the past have thought they have an idea and we’re going to hand out the rest.”

Just as there’s no cookie cutter business idea, Startup.SC doesn’t follow a regimented business plan. But overall, they see soon-to-be-businesses through basic training of sorts over the course of 16 weeks. There’s a Business Model canvas, a tool Smith says is ever-changing, and a required 54-hour Startup Weekend. Startup evaluates the competition in each business’s marketplace and how to make their pricing, product and sales strategy stand out. Mentors, investors and donors will then take their businesses by the hand to guide them through creating a Minimally Viable Product, understanding the software development process and hiring the right technical staff. Because it could get ugly out there. But it could be worth millions if businesses are willing to take the risk.

Startup.SC’s class of Fall 2014 included Naked Cask, a technology platform for the craft beer industry; LunaDesk, an online employee-management platform for small businesses; Kids Can Give Too, founded by Barb Royal, a mom and teacher who got sick of spending money on her kids’ friends’ birthday parties and thus created an online birthday party management service that makes it easy for kids to share birthday gifts with a charity; and FieldVine, a mobile management tool for those in the trade industry.

“They’ve equipped me to drill down through a trade that has nearly 20 segments and focus on the two that make the others possible—all within a matter of months,” he says. “Then I could build the technology that was needed to push into the marketplace, thanks to Startup’s mentorship, feedback, guidance, correction, challenge and physical resources—all the things I needed as a startup to allow me to fail, quickly pivot and push again. Ultimately, I will become a national platform, with physical jobs created right here on the Grand Strand.”

Dave Sodano with ewatersensor.com, also part of the Spring 2015 class, is a longtime plumber who patented a high-tech monitor that notifies both the homeowner and plumber when there’s a flood. They’ve gone from the idea to the actual product, thanks to Startup.SC, and are now on the verge of having a viable, sellable product to bring to investors and into the market.

“I can’t express how grateful I am to Startup.SC,” says Sodano. “…There are times when I am around the Startup family that I feel like Penny from The Big Bang Theory. I can see just how smart they all are and understand what little I know. But they always are helpful and help me think through all the challenges—technical and business—and make it so even a plumber can understand the process, the technology and programming requirements.”

“I feel like a lot of people don’t apply to Startup.SC because they don’t know a lot about technology, but the reality is that the best entrepreneurs are the ones who have been working in another industry and found a problem to solve using technology,” says Smith.

The second and third segment of Startup’s threefold process, according to Smith, involves workforce development, specifically a new code school they’re hoping to implement in the next two years, as well as education and awareness to scout technical talent as early as middle school and community building to keep the support and resources here for these startups, which includes a boost of video marketing on Startup.SC’s full-time staff.

The bottom line for Startup.SC is there’s no stopping them. In November, they will host another Pitch Night to welcome more aspiring entrepreneurs and maybe even take one or two on board per month, Smith says. The startup incubator is a specimen they continue to study throughout the country to see what’s working and what’s not so Startup.SC can function at its best.
Have an idea? Apply at Startup.SC at any time to pitch it. It could start a revolution.