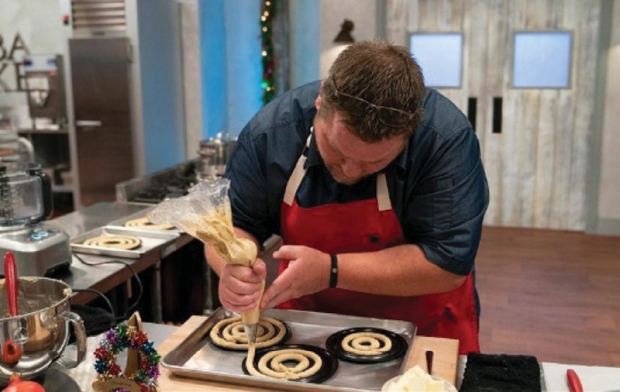 Blount in his element as a certified executive pastry chef at Horry Georgetown Technical College.

If pastries had been Picasso’s muse, we might today see works of art that resemble those of Myrtle Beach chef Geoffrey Blount.

“I was known, for the longest time, for someone who does a lot of sculptures,” says Blount. “I competed twice internationally, once for the Gelato World Cup and I did a huge chocolate sculpture with water running through it. I also did a life-size bicycle made out of chocolate.”

The certified executive pastry chef and Worldchefs certified master pastry chef was just prepping to go back into the kitchen classrooms of the International Culinary Institute at Horry Georgetown Technical College to teach his Baking & Pastry Arts course when we chatted.

“Students are wearing masks and protective face coverings and staying six feet apart,” says Blount. “The school is also using the time to train some students on what the CDC regulations look like during a pandemic.” 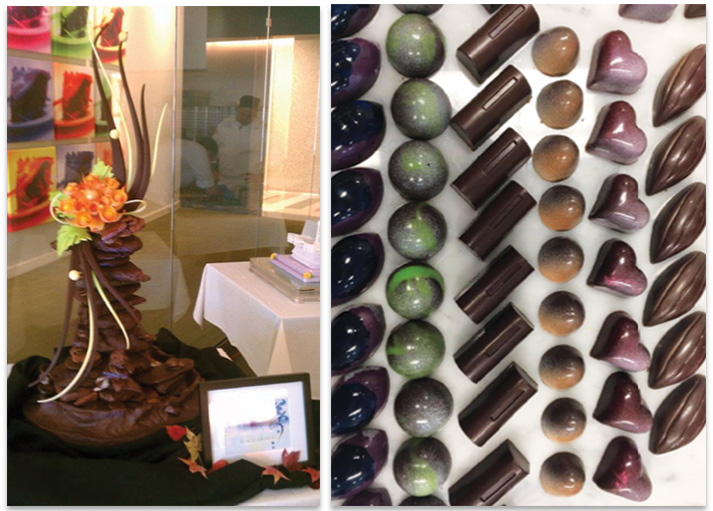 This is on the heels of Blount’s TV appearance on Food Network’s Season 6 of the Holiday Baking Championship pre-pandemic, in which he competed (a la Chopped style) with 10 other bakers and pastry chefs across the country for the chance to win $25,000. Blount made it to the final four, winning the challenge for his panettone mousse cake, an artistic mélange of panettone in five different ways: panettone sponge, panettone-infused mousse, panettone mille-feuille in the middle, panettone truffle and a panettone tuile on top filled with isomalt. He was eliminated, however, in episode 7 for a Hanukkah-themed challenge.

“Yeah, my weakness was cutesy fun, fluffy decoration stuff,” says Blount. “And the girls were all really good at that, but Dwight and I both struggled with that because we were classically trained French pastry chefs, with nice, clean lines and really elegant, with fun, funky flavors.”

Not only was he known on the show for his clean, masterful lines, but he was also known as “Papa Bear.”

“I was the senior guy,” he says with a laugh. “I was the guy at the hotel in the morning that would count everybody down as they were getting into the van, help the ladies in, and close the door and tell the driver that we had everybody...I was just the father figure, I think—it’s the teacher in me as well.”

His culinary students were the main reason he agreed to be on the show, despite two previous appearances on Food Network competitions, Sugar Dome in 2012 and Beaver Creek National Baking Championship in 2000, which left a bad taste in his mouth.

“My objective with this was to expose the Myrtle Beach International Culinary Institute to the national public,” says Blount. “To be honest, the double-edged sword of this is that I get students that come to me who’ve watched way too many episodes of Cupcake Wars, and I have to break them of that.”

Chef sets the record straight, erasing romantic images we all may conjure as we sit and watch the show as the audience. Contestants are at the studio for 12 hours at a time, much of it spent in the green room. But when the host is telling them how much time they have to finish the challenge, that’s legitimately the time they have to complete it. To prep for the show, Blount and two of his three kids watched weeks’ worth of past episodes.

“I had a notebook that was probably a hundred pages thick of notes with different scenarios, like ‘What would happen if I did this?'" he says. It’s exactly why he likes baking, or what he calls “organized chaos.”

“I liked the uniformity of it, the science part,” says Blount. “I’m a pretty smart kid and I liked science, so there’s something about that factor in controlling the results… You have to engineer the problem and then engineer the solution. It’s kind of fun. And, of course, sharing that with students is super cool.” 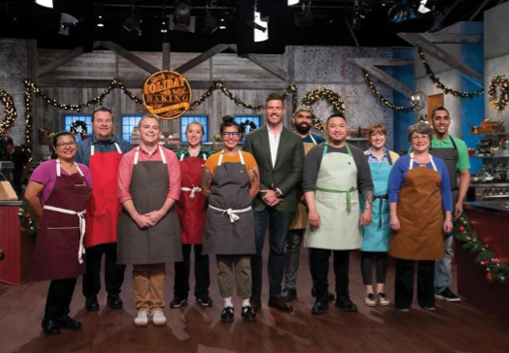 Originally from Jacksonville Beach, Florida, Blount began out of the kitchen and on stage creating set designs: first at the Douglas Anderson School of the Arts and then as a theater major at Catawba College in Salisbury, North Carolina. He flunked out of school his first year because he enjoyed theater more as a hobby, so to pay the bills during the off-season he worked as a line cook and discovered he could expand his career (and paycheck) if he went to culinary school.

“Also what kept me in the Charlotte area was my at-the-time girlfriend, who’s now been my wife since then, which was February 2, 1990,” says Blount. “She was in theater as well, but now she’s an accountant and I’m a chef.”

Blount earned his AAS degree in Culinary Arts from Central Piedmont Community College in 1995 and, while working with hotels up and down the East Coast, such as the Renaissance and Ritz Carlton Corporation in Chicago, he attended the French Pastry School in Chicago. Blount also has a bachelor’s degree in International Hospitality Management from Strayer University and a master’s degree in business entrepreneurship from Western Carolina University.

“I chose to get my master’s because, after teaching in North Carolina for quite some time, I noticed a lot of my students wanted to become entrepreneurs and I figured the best way to help them was to have more expertise in the entrepreneurial sector,” says Blount.

But, besides the knowledge of business and science in the culinary arts, a big factor is, of course, the arts.

“You have to have that artistic niche,” says Blount, “and everybody has a different thing. You have to have the science to get the product to where it’s consistent from the first to the last bite, but you also have to have this kind of ability to go over the top and bring it home visually because we eat with our eyes. You may have to eat the main course, but you do not have to eat dessert. … And if you’re going to entice someone to eat dessert, it better look good because that is what’s making them save room and throw caution to the wind and ask for the dessert tray to get wheeled out there.”

What is Blount’s artistic niche?

“I’m definitely not known for ‘funny,’” says Blount. “I typically am known as the gear guy. I used to craft gears on all kinds of stuff. And then there was a certain time in my career when I started doing more natural stuff, like the bird’s nest on the show, which was so real, and the sugar, so I’ve gone to this natural sculpting kind of thing.”

He claims, however, that he’s not a sculptor. But one of his hobbies is balancing river rocks for hours on end surrounded by the peace and quiet of nature—something he now tries to imitate in his pastry arts without the use of a mold.

A member of the American Culinary Federation and 2012 Chef Educator of the Year, Blount has earned recognition for his work, including Best Pastry Shop (2005 and 2006), one of the Top Ten Charlotte Chefs (2004) and his dessert creations were featured at both the 2004 and 2005 James Beard Dinners. He’s also a North American Ambassador for Callebaut Chocolate Company.

When his family of five sits up at the holiday table, Blount says his dessert tradition is to “mash up stuff,” like his famous sweet potato pecan pie with “a lot of bourbon,” pumpkin cheesecake brownies, and, of course, some sort of chocolate mash-up.

“Everybody in the household has a different chocolate favorite and, luckily, as an ambassador for a chocolate company, I have all different kinds of chocolates,” says Blount. “If you open up my cabinet right now, there’s probably 200 pounds of chocolate.” 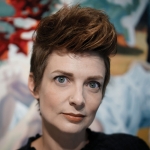 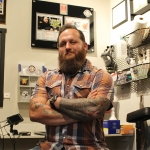 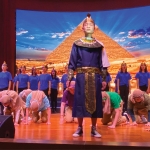