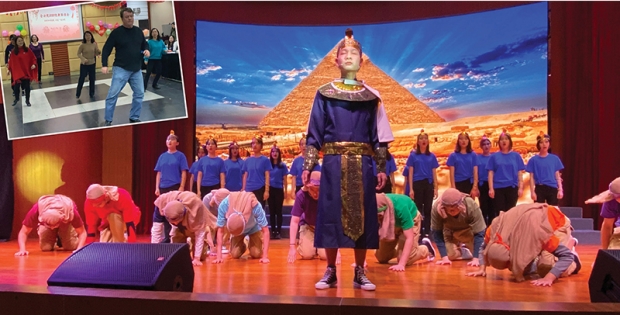 Joseph and the Amazing Technicolor Dreamcoat was the first musical ever performed at Nanjing Normal University. Inset: Most of Earnest’s students had never taken a dance class before.

One Coastal Carolina University faculty member is using his expertise to share the beauty and joy of performance with students across the globe.

Steve Earnest, professor in CCU’s Department of Theatre, was awarded a Fulbright U.S. Scholar award for the 2019–20 academic year to teach and develop an English theater curriculum at Nanjing Normal University (NNU) in China.

The prestigious and competitive Fulbright U.S. Scholar program offers annual teaching and research awards in more than 125 countries. Applicants submit a detailed proposal for a project in a discipline-specific area, and awards are open to college and university faculty as well as professional artists, journalists, scientists and independent scholars.

Earnest had traveled to China three times in the past with the China Center for International Economic Exchanges, and his Fulbright proposal developed out of an experience with a theater group in 2017. As he helped out with a play rehearsal, he realized that the actors were speaking English but had very little sense of the nature of acting. 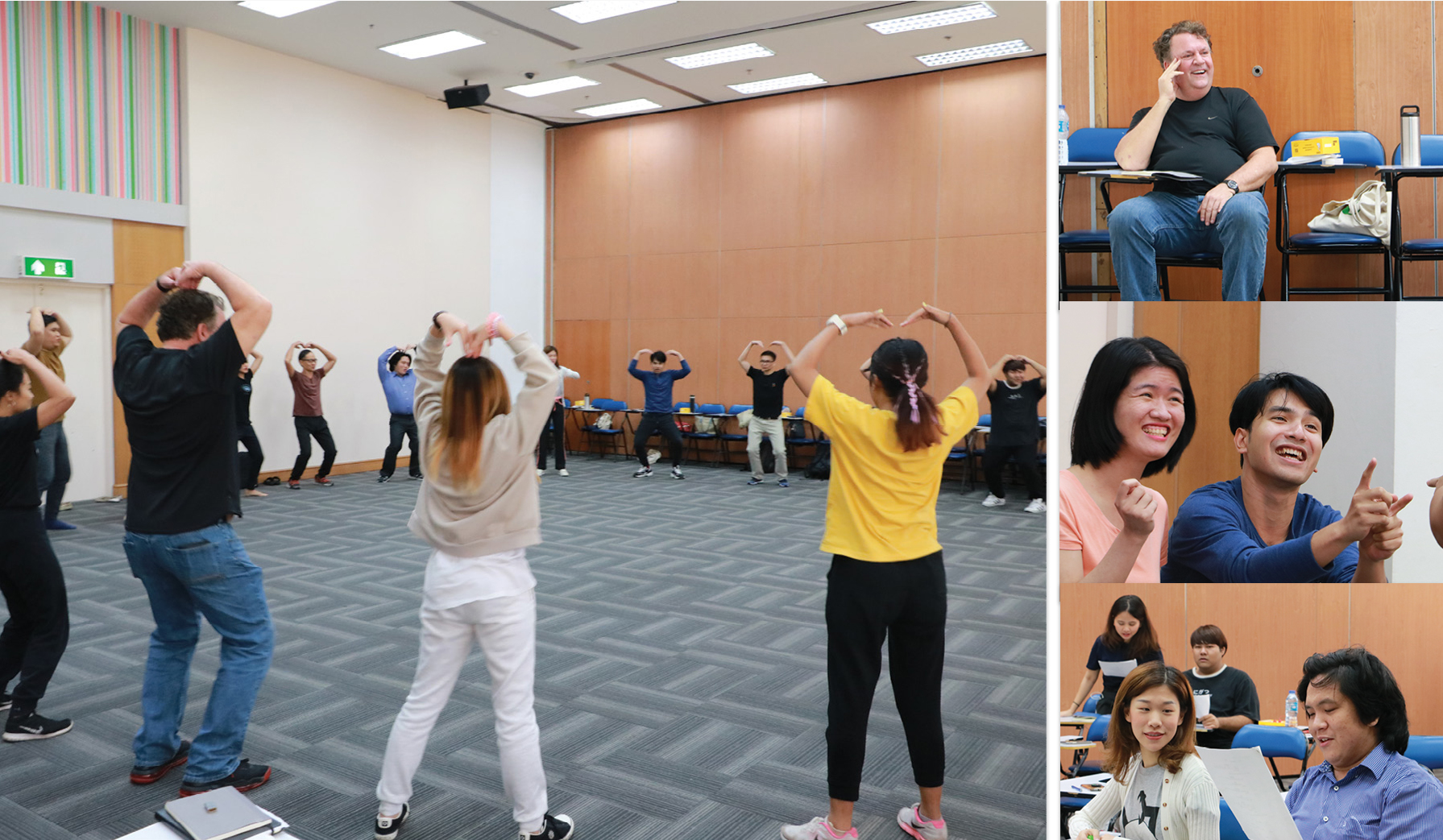 “They knew the lines—they could read them and recite them, but they had very little idea of how to translate those words into action on a stage,” said Earnest.

Thus, in his Fulbright experience, Earnest emphasized the conceptual and interactive dimensions of theater. During the Fall 2019 semester, Earnest taught four classes in theater and tap dance in addition to directing, designing and choregraphing a production of Joseph and the Amazing Technicolor Dreamcoat, the first-ever musical performed at NNU.

Earnest said the teaching experience in China was different in nature and scope from the classroom scene at CCU, and students adapted eagerly to the divergent approach.

"...we all loved working together, and I just insisted that they have fun and work to tell the story."

“Most all of my classes were 50 to 70 students, and typically, they were used to just hearing lectures. So when I came on to the scene, we began immediately with theater games, vocal exercises and heavy group participation. It was unusual for them, but they quickly got used to it. The freshmen learned improvisation, while the sophomores worked on monologues and scenes from Western drama and the juniors focused on Shakespeare. In all classes we worked on vocal production and delivery in English.”

Earnest constructed the framework for the production of Joseph and the Amazing Technicolor Dreamcoat in September 2019, involving faculty members in leadership roles and allowing students to sign up for different types of involvement, including costume, lighting, graphics, props, crew and marketing/box office in addition to cast roles.

Because the concept of a musical was entirely new to the students, Earnest took extra time in introducing them to the feel of the genre.

“It was a challenge because very few of them had ever been on stage before, and none had been in a musical,” Earnest said. “However, we all loved working together, and I just insisted that they have fun and work to tell the story.”

Earnest noted that basic differences in theatrical production between Eastern and Western cultures came into play.

“Eastern theater is not necessarily realistic; it’s not based in realism,” Earnest said. “It’s inherently much more presentational, where you’re talking to the audience. In Western theater, even if there are no stage directions, we as theater people have to make that action happen.”

From the movement and dance elements to comprehending the storyline, the experience was difficult for the students, yet Earnest’s encouragement allowed them to grow. 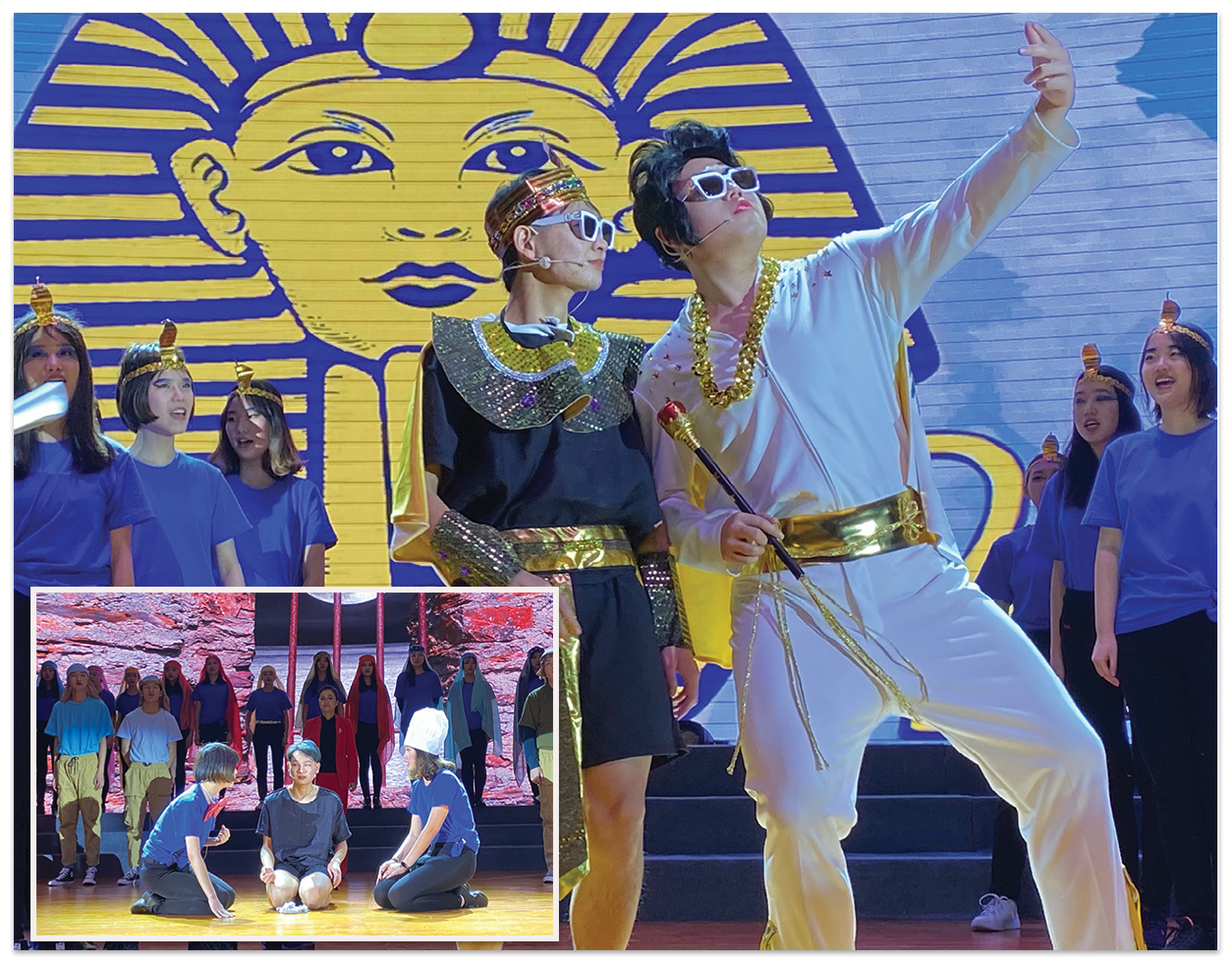 Chinese students embraced the opportunity to perform a Western work.

“The story was a little foreign to them, but they embraced the idea of doing a work from the West,” Earnest said. “We had to put in extra work into the movements, and often it had to be made even more simple, as no one had any dance training. But they really loved the experience.”

Earnest also directed a final tap dance performance at the NNU Chinese New Year party and traveled to Bangkok, Thailand, during the semester break, where he taught theater workshops at Chulalongkorn University.

Unfortunately, global events cut short Earnest’s time in China. In early February 2020, he was required to return to the United States as a result of the coronavirus health crisis. Earnest had numerous additional productions planned, including a student-directed performance of Shakespeare’s Much Ado About Nothing and acting in a professional production of Chinglish. In all, Earnest had the potential to be involved in three productions, two books, and one film, had his fellowship been extended to the original August 2020 conclusion.

Although the fellowship was suddenly abridged, Earnest feels he was able to achieve his original goal for students and faculty at NNU.

“I just wanted to do a good job and make a difference,” said Earnest. “I wanted to help them feel confident about their work and, both in the classes and in the show, to give them an experience they would never forget.” 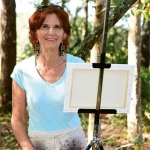