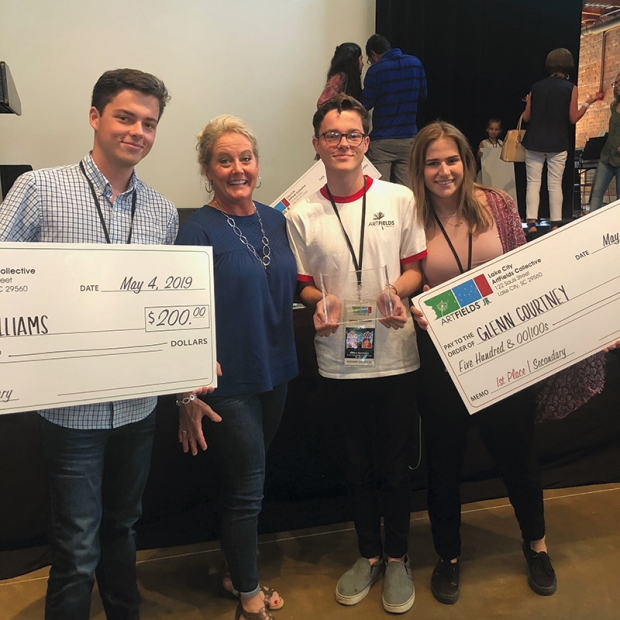 “If you ask me what I came to do in this world, I, an artist, will answer you: I am here to live out loud.”—Emile Zola

Student artists in Horry County are exemplifying Zola’s sentiment with their work, and it’s having an impact on the regional art scene. With teachers who facilitate and provide opportunities for their students to shine, these young artists are producing works that catch the viewers’ eyes as well as their spirits. Even better, they’re reaching professional and artistic prominence that strongly predicts a bright future. 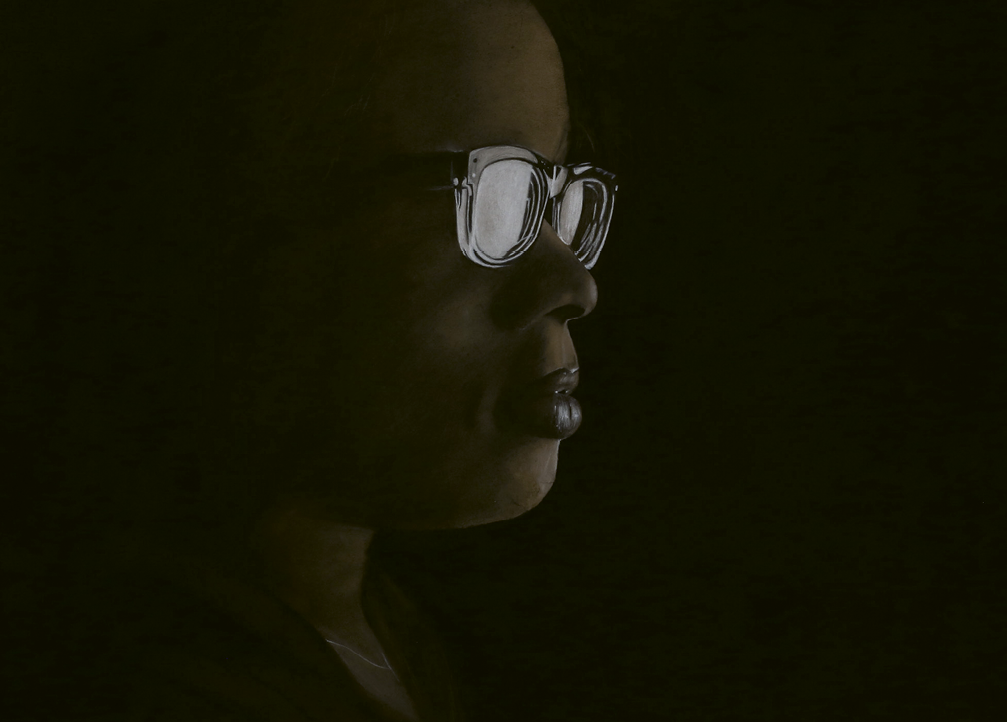 Four area artists swept the grades 9–12 awards at the 2019 ArtFields Jr. competition in Lake City in May, suggesting that something’s going on in Horry County art rooms. Glenn Courtney, a senior at the Academy for Arts, Science and Technology (AAST), won first place with her mixed media installation “The Masses.” Aaliyah Houston, a sophomore at Carolina Forest High School (CFHS), won second place with her charcoal portrait “Maliyah.” Will Williams, a senior at AAST, won third place with his oil portrait “Transfixed on the Light, ” and Noah Williams, a senior at AAST (and Noah’s twin brother), won a Merit Award with his mixed media piece “A New Sanctuary.”

ArtFields Jr. is the student division of ArtFields, a regional competition that draws thousands of entries from artists throughout the South and thousands of viewers from throughout the nation to Lake City each year since 2014. This year was the third time AAST students participated in the event and the first time for students from CFHS. 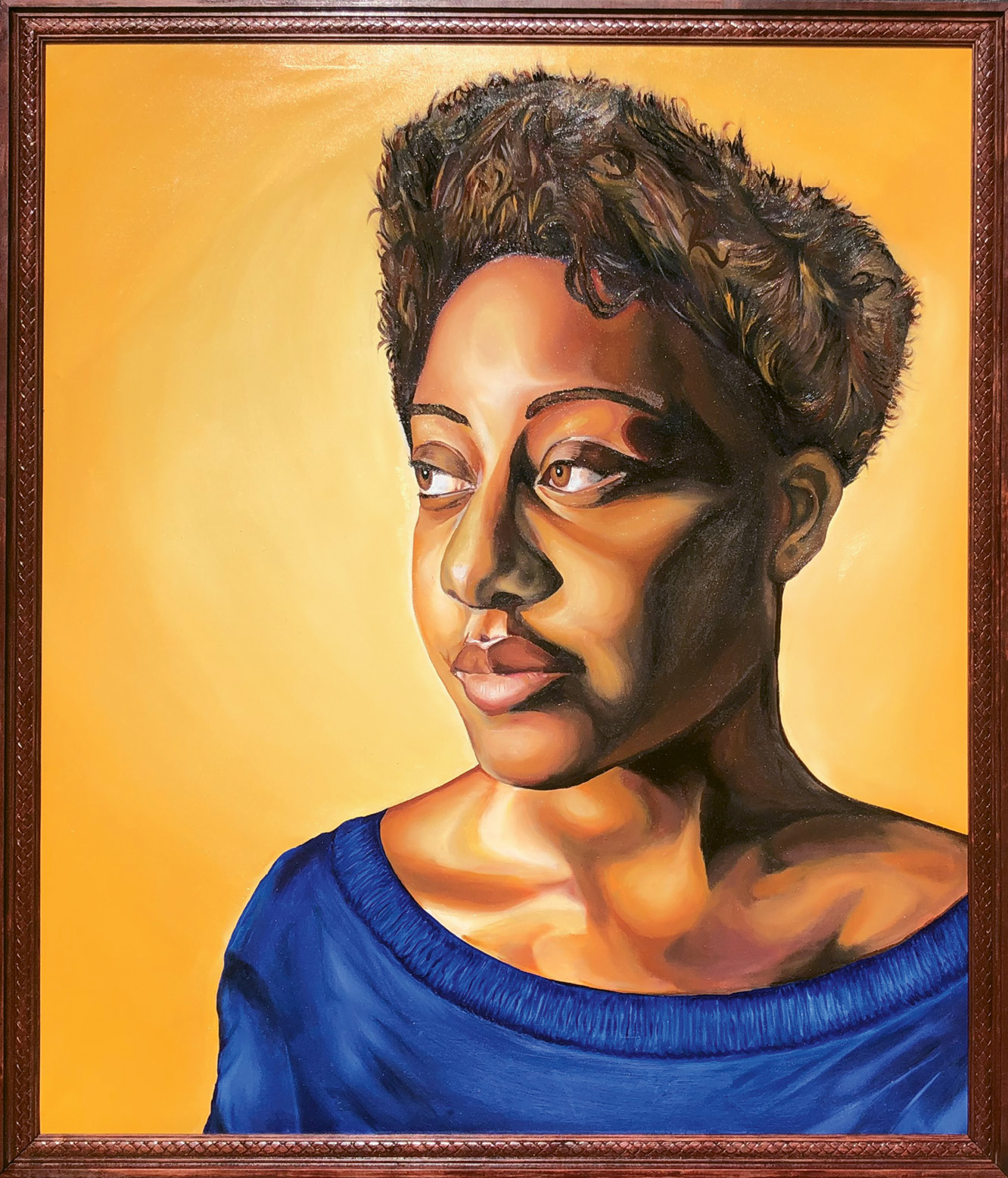 Will Williams’ classmate Jasmine Thomas is the subject for his oil painting “Transfixed on the Light.”

For each of these artists, creative work is not only a product, but also a medium of storytelling. In addition, several of them market their work, creating promotional materials and maintaining a professional presence on social media.

“I tell my students to find purpose, both in what they do and what they create,” said Jamie Franklin, AAST art teacher. “They create strong work, but they’re passionate about their art in so many ways, and that sets them up for success in their career, whatever they choose to do beyond this brick and mortar studio.”

Will and Noah Williams create art as a means of telling the story of the South. Will’s portrait of Jasmine Thomas, an AAST classmate, in “Transfixed on the Light” represents a blending of past and present, light and dark, and Jasmine’s and his disparate experiences. The work is accompanied by a video featuring Jasmine and Will exploring issues of race and society.

“I wanted to use this opportunity to not only share my story—but our story,” Will wrote in his artist’s statement. “After collectively sharing our experiences, [Jasmine and I] decided the painting needed to become more than a portrait of her, but a portrait of our state that shows both where we’ve been and where we’re going. Our state has a history of tonal variances … [and] in order to move forward, we must embrace the differences and seek to find the commonalities that unite us.”

Noah Williams, whose work also focuses on the South but with an eye toward religion and identity, created “A New Sanctuary” with the stained glass-filled churches of his youth on his mind. He mined the resources in other departments at AAST to create the mixed media work.

Glenn Courtney’s mixed media installation “The Masses” portrays the scope as well as public reaction to the issue of global deforestation.

“I grew up going to Southern Baptist churches, and I always remember seeing stained glass as a child, so I wanted to create something more contemporary. I used a 3D laser printer to create the portraiture in the piece,” said Noah. “I was able to etch in acrylic, and I suspended those in layers of resin to create the texture that was similar to stained glass.”

“The Masses” reflects Courtney’s passion for environmental protection and her sense that many around the world overlook the earth’s flagrant destruction.

“It’s an installation about deforestation,” said Courtney. “I made a wooden world map, using reused wood. It lit up, and there was more intense lighting where deforestation is a huge problem.”

It was on Franklin’s suggestion that Courtney expanded the project into an installation, adding 70 wood carvings. 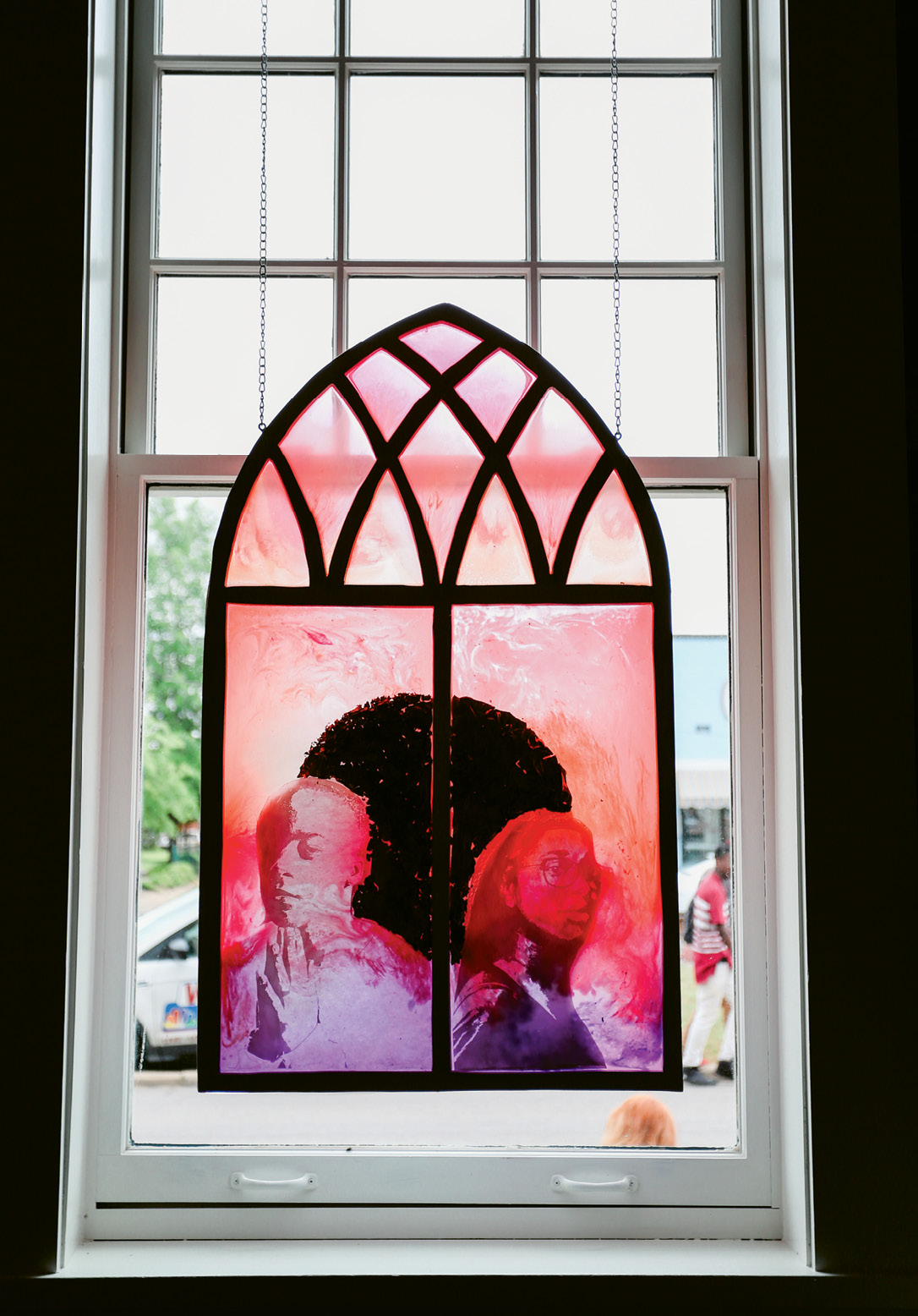 In “A New Sanctuary,” Noah Williams explores themes of religion and identity.

“They look like humans, but very stagnant, and they’re made out of degrading wood. They’ve got their back turned to the problem—they’re ‘the masses,’” said Courtney. “Then there’s one guy in the center who’s more evolved. He’s better carved, and he’s facing the problem, reaching out toward it, and that person represents the individual decision to work toward change.”

Courtney, who maintains a website for her work, sold the entire installation to a patron in Puerto Rico who saw it online.

Kristen Dutka, art teacher at CFHS, recognized Aaliyah Houston as an “amazingly talented” artist before Houston even reached high school; Houston’s work won an award in the CFHS art show when she was in eighth grade. Much like Franklin, Dutka explains that when a student demonstrates such passion and innate ability, the teacher’s role is simply to provide guidance and opportunity for him or her to thrive.

“She can draw or paint anything she sees,” said Dutka.

Houston’s portrait “Maliyah” depicts her best friend, yet the essence is a blending of her own and Maliyah’s personalities.

“I chose the glasses angle for the glasses to reflect a lot so you couldn’t see the eyes,” said Houston. “I don’t think you can really see through me—I’m very quiet, but on the other side of my shyness, I’m also very goofy.”

“It’s very uplifting and gives us such hope—gives me hope,” said Wilson. “And the students are so genuine; they’re not about the award, the accolade—they’re all about expressing who they are and what their message is, and that’s what we need.”

PHOTOGRAPHS COURTESY OF ARTFIELDS AND AAST 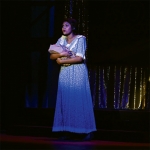 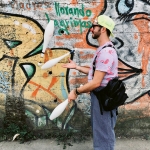