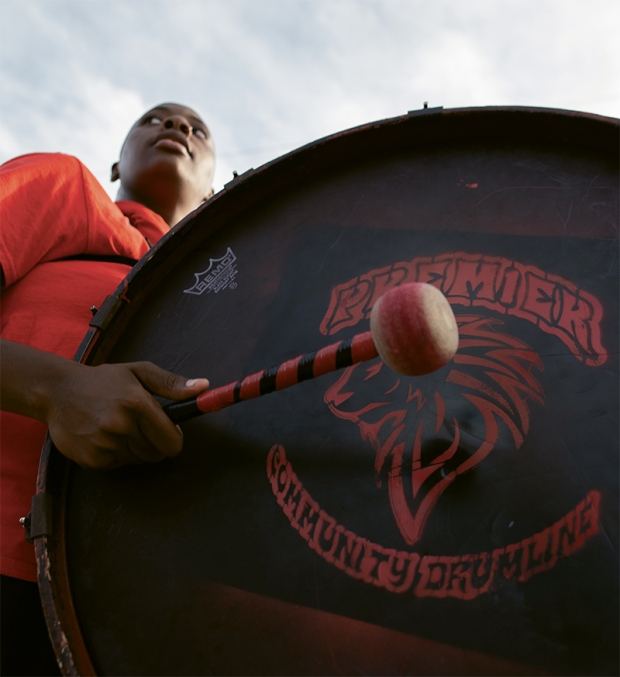 Bass drummer Justis Evans is one of nearly 100 members of the Prem1er Community Drumline.

Under a night sky yet sprinkled with stars, rhythms created by drums, cymbals, chants and cheers sailed through the air. This music was so melodious and moving that folks at Georgetown’s East Bay Park stopped biking, walking and playing tennis to feast on the funk. Feet tapped. Heads bobbed. Hips shook.

Blame it on the boogie, and Prem1er Community Drumline should be charged. If jamming soulful sounds were a crime, this band made up of young ones—aged 2 to 24—would get a life sentence. Thankfully, no such law exists and those appreciative of this collective can overdose without concern.

“We can groove funky,’’ said Steven J. Grant, the 30-year-old progenitor of Prem1er and its celebrated visionary. “We can groove smooth.”

He is Prem1er’s biggest supporter, toughest drill sergeant, stalwart friend, firm guardian and fellow fan of instrumental expressions. He is tough love magnified. Yet, he also has a tender spot for every band member.

“I wanted to create something with youth in mind because I know how much music impacts them, and all kids don’t play sports,” Grant said. “God gave me this vision.’’

Grant’s perseverance had paid off. Now, he continues to build the band on a foundation of faith and focus. What was birthed with a mere 11 members is currently almost 100 youth representing Grant’s vision with precision.

Prem1er plays tunes and wears colors (red and black) inspired by Grant’s life as a church musician and a member of the Bongo Brothers Inc., the drumming section within The Marching 101 at South Carolina State University, where Grant attended and studied business.

“Some people told me no one outside of Georgetown County would ever see our band,’’ said Grant, a master drummer who started cultivating his gift as a 6-year-old musician at Shields Chapel Fire Baptized Holiness Church in Myrtle Beach. “They said the kids needed to be on a school band in order to be successful.”

Well, in the band’s first year, Christion Nesbit earned a band scholarship to play at South Carolina State University. He became a member of Bongo Brothers Inc., too. 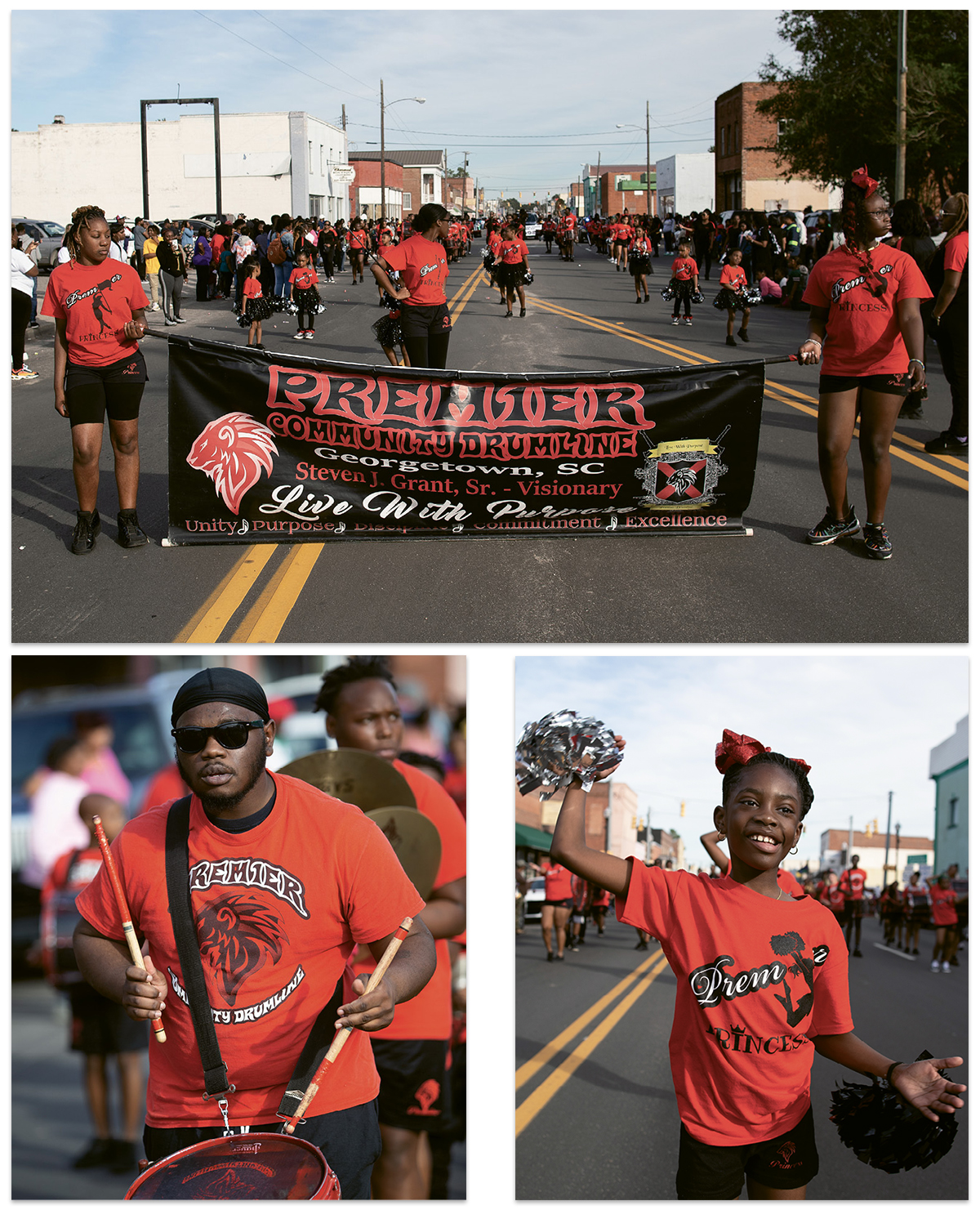 Prem1er Community Drumline is a talented, dedicated group of young people drawn together by the love of music, dance and the need to express creative energy. They practice diligently three days a week under the watchful tutelage of Steven J. Grant, the band’s founder. He believes the band helps young people live their lives with purpose and passion.

The Man, The Mission

Unity, purpose, discipline, commitment and excellence are words that flow freely from Grant’s lips. Those are dictionary entries categorizing the essential keys required to keep his music machine operating smoothly. Recently, during a practice held at Howard Gym & Auditorium in Georgetown, Grant was sorely disappointed with the group’s energy. It was lackluster at best when they said their mantra, “We Are One!”

There was no fire in their voices. There was no exclamation point at the end of that exclamatory sentence. So as they stood outside with the moon to their backs, he gave them a look. It wasn’t mean. It wasn’t nasty. It was, however, slightly unnerving.

“My third graders at Brown’s Ferry can do better than that,’’ said Grant, who is the elementary school’s band director. “Heads down.”

All heads lowered, as if in prayer, before looking up again and shouting, “We Are One!”

Heaven, if listening, could hear the band’s second affirmation.

If members don’t take their studies seriously or misbehave in school, they cannot participate in events until improvement is proved.

Grant, who also finds time to be a barber at Yumby’s Barbershop, grooms his band every Monday, Wednesday and Thursday. Typically, the day starts with homework hour from 4:30 to 5:30 p.m. Then, the group does calisthenics, following voice commands given by Grant or another adult supervisor who helps him in coaching and caring.

Once their warm-up is over, they get busy until 8 p.m. on used drums he bought from eBay and repaired himself.

“If we are boring, he makes us start over,’’ said Tanaiyah Reid, a bass drummer and seventh grader at Georgetown Middle School.

So, they grind hard, and doing so makes them happy.

“This band is my peace because I like music,’’ said Celicia Williams, a cymbalist and a 10th grader at Georgetown High School. “My problems go away when I am here.” 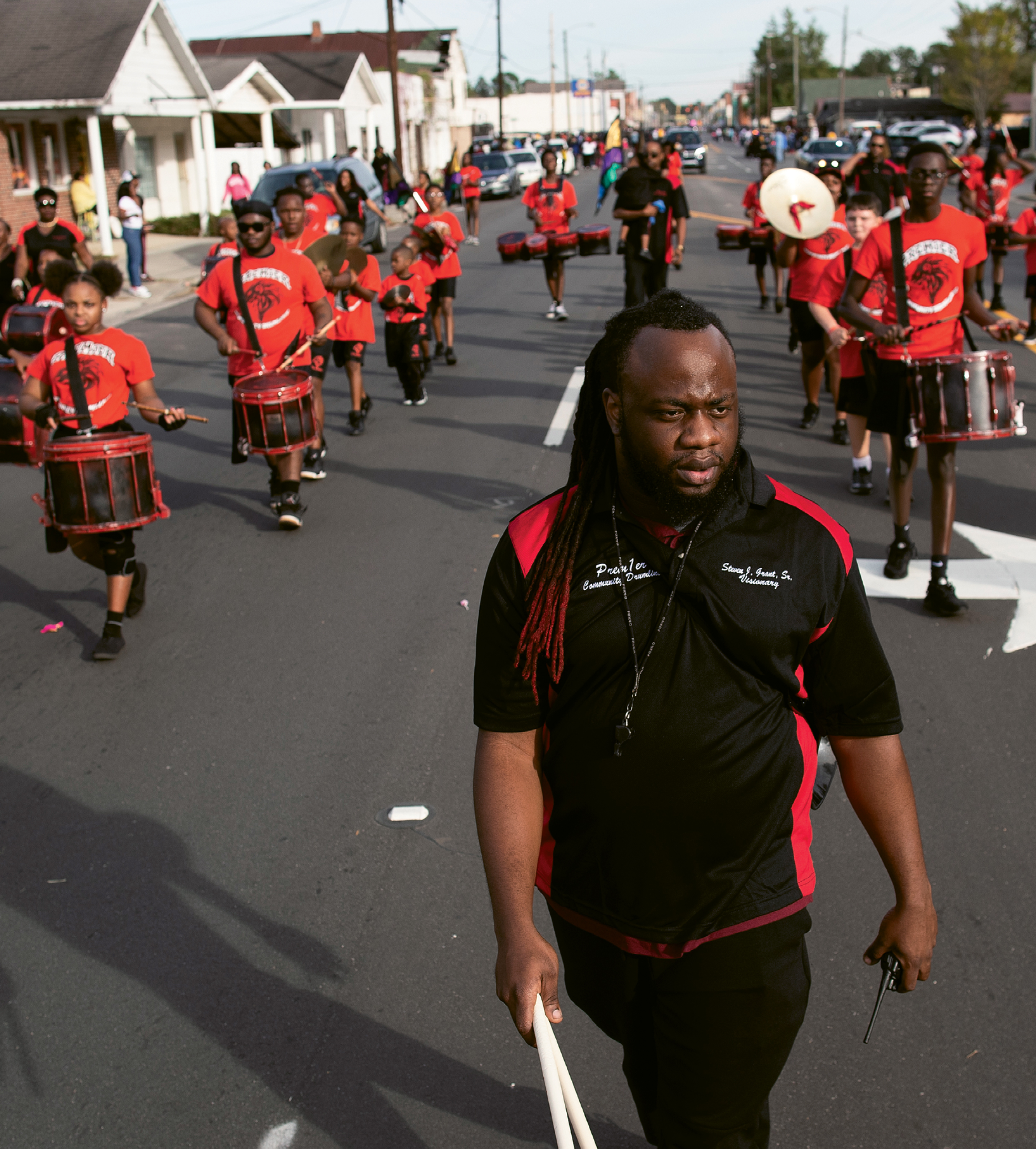 Founder Steven J. Grant watches over the members during a performance at the Andrews Homecoming Parade in downtown Andrews.

The Beat Goes On

Jurnee Blye was nervous about possible consequences after being late for her first-ever practice.

“I was terrified,’’ said Jurnee, a fifth grader at Waccamaw Intermediate School. “I thought I had to do 50 push-ups.”

Gregarious, friendly and loquacious, she beats her bass drum with the might of a man. Her bubbly personality only becomes steely when drumming. Her voice takes pride in joining others in from-the-belly shouts of “Ooh Wee” as she bangs her drum with such force that the rumbles from it pulsate through the people who are amazed by the power of play on display.

In August 2018, Jurnee joined after seeing a performance in January of that same year at a Martin Luther King Jr. parade.

“Literally, I had a flow through my body,’’ Jurnee said with kid-in-a-candy-store glee. “It was like God was trying to take me. God told me to be in this band.”

She, like most of Prem1er’s pupils, had no previous musical skills.

Fast forward to today. Jurnee is among a crop of confident kids and young adults who have become strong in their respective band roles. They are no longer amateurs.

“We know how to capture our audiences,” said Faith Gurley, a senior at Carvers Bay High School who is the snare drum section leader. “We give them a lot of excitement and it keeps their attention.”

Taryn Sparkman, a freshman at Winthrop University and a biology pre-medical major, has been in the band since its inception.

“We all make mistakes or may have had a bad day, but we use the bad days as teachable moments and use music as an outlet to let go of those bad times,” said Sparkman, a snare drummer. “We help each other figure out who we are as young adults.”

Grant envisioned Prem1er to be a body of young folks bound by an insatiable love for music, unbreakable and unshakeable.

“Premier” is spelled wrong intentionally because Grant wanted to make it clear that no one person is Prem1er, not even him. Hence, the number 1 that takes the place of the letter “i.”

“We are one,’’ Grant said. “The number 1 can mean anything in your life, like keeping God number one.”

His faith produced a band that gives young people power to soar as high as they can fly without fearing their wings will somehow be clipped.

Two-year-old Zion Giles, who will rock an Afro or braided hair, plays tiny cymbals or sneaks and beats drums. Unfettered.

The flag girls wave the flags as if marching for dignitaries. The dancers smile wide and often, while doing PG hip moves that get crowds pumped. And the cymbal and drum players mesmerize with hypnotic beats that have made them fan favorites in and beyond South Carolina.

Prem1er is a self-esteem builder and a sanctuary. No one is bullied here, made to feel like an outsider, or shunned.

This is a safe place.

“I like being a part of this band because the people treat me nice,” said Jeremiah Clark, a fifth grader at Kensington Elementary School who plays upright tenor. “I finally feel free.”

His sister, 5-year-old ZaNyria “Lucy” Winns, is the captain of the youngest pom-pom girls and choreographs moves for them that bona fide dancers would surely appreciate. She knows how to shake it and bake it, while keeping her moves sweet and squeaky-clean.

Parents applaud Grant for creating an oasis for children where they can explore their gifts without prejudice.

“The drumline is an awesome experience for children with special needs and their families,’’ said Shannon Davis, the mom of Hunter Davis. “We believe Hunter is learning mental, emotional and physical endurance.”

Sheila Brown, Faith’s mom, also has a son, Wilson Gurley, in the band. He has Asperger syndrome, but she said his developmental disorder hasn’t affected his ability to strengthen his talent.

“Prem1er has taken him to another level,’’ Brown said. “Through performing and competitions, he is building life skills.”

“He is so driven,” his mom said. “Being a part of Prem1er encourages him so much.’’

Prem1er Community Drumline is open up to youth anywhere. Currently, members hail from Georgetown, Horry, Williamsburg, and Florence counties. Interest meetings are typically held in July. Then, new and returning students, as well as their parents, attend a meet and greet. The general registration fee is $50. For more information, contact Steven J. Grant at (843) 325-6132 or email theprem1er.incorporated@gmail.com. 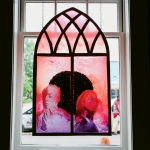