History on the Corner

October 2021
Written By:
Sara Sobota
Photographs by:
Image credits below 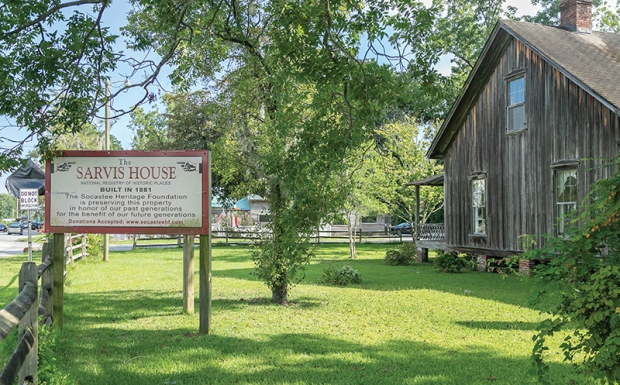 When we think Horry County history, we might envision Kingston Presbyterian Church in Conway, the Galivants Ferry grist mill, or maybe the Ocean Forest Hotel in Myrtle Beach. However, we rarely think “Socastee.”

It turns out that Socastee is home to five sites on the National Register of Historic Places, collectively deemed the Socastee Historic District.

Located smack in the middle of 21st century Socastee life and commerce, these structures serve cultural and even pragmatic purposes, but passersby might never recognize their age and historic significance.

Two homes, a store, a bridge, and a pecan grove comprise the district, which was added to the National Register in 2002. The Socastee Intracoastal Waterway Bridge, the Thomas B. Cooper House, the Thomas B. Cooper Store with adjacent pecan grove, and the Samuel S. Sarvis House are documented as historically impactful by the U.S. Department of the Interior National Park Service, partially because their structures remain intact and their relative layout is largely unaltered.

Back in the days when turpentine was the economic catalyst, and Peachtree Landing on the Waccamaw River was the main commercial access to the area, this collection of sites was typical of newly emerging post-Civil War communities in upper coastal regions of South Carolina.

While one structure in the Socastee Historic District still serves its original purpose and one has been repurposed as an inn and event venue, the Sarvis House was in danger of destruction via neglect until a community organization recognized its value to the community.

The Socastee Heritage Foundation (SHF) purchased the Sarvis House in 2013 and continues to work on upgrades to restore it to its original condition.

The story of this grassroots effort and SHF’s dedication to Socastee history. as well as its community, can be traced from 1881 to 2021 and beyond.

Born in 1843 near Bucksville, S.C., Samuel Scarsboro Sarvis enlisted for the Confederacy in 1862; he was promoted to Second Lieutenant in 1863, First Lieutenant in 1865, and elected Captain of the Socastee Light Infantry near the end of the war.

Sarvis returned to Socastee and built a home in 1881, shortly before his marriage to Lucy Ellenita Grissett.

Sarvis and the neighboring Dusenbury family owned and operated the Dusenbury and Sarvis store, across the road from their homes, and both served as postmasters for the community.

The Sarvis family had nine children, including “Captain Frank” Sarvis, who purchased a steam boat in New York and brought it to Socastee.

He used the screw-type, propeller-driven ship—one of the first of its kind in the area—as a passenger and freight boat, traveling on the Waccamaw River between Conway and Georgetown.

Architectural features of the Sarvis house are typical of period homes, another characteristic that qualified it for the National Historic Register.

With one-and-a-half stories and two chimneys, the house is an L-shaped structure with a gable roof and unfinished board-and-battan siding.

The entrance has a hip roof, full front porch, and transom light door, while the rear features a wash porch with a well.

Exterior architectural touches include a diamond lattice railing on the front porch and wood lintel detailing on the windows and doors.

Inside, original features include the floor boards, interior doors, chimneys and mantles, and many interior fixtures.

“The guts of the house are still original,” says KC Hall, SHF board member.

Some original landscaping features remain as well, including a magnolia tree that predates the house, and a peach and several crabapple trees planted by Samuel Sarvis.

Over the years, the house passed through many branches of the Sarvis and Ammons families.

Current Socastee resident Bo Turbeville, SHF co-chair ,who grew up nearby, recalls that when electricity first became available along the street in the late 1920s, the Sarvis family declined it.

“They didn’t want power lines running over their property,” says Turbeville. “It caused a problem for a while.”

The house remained without power until 1983.

A group of nine longtime Socastee residents gathered in 2009 with a common goal: to create a community festival to call their own.

And the venture was off. SHF developed its mission of raising funds for community needs, supporting individual children and families in Socastee, and providing awareness of Socastee heritage.

One hundred percent of funds are invested back into the community.

“Within the first two years, we had raised enough money to purchase and set up two special needs playgrounds at the two highest special needs schools in Horry County [Socastee Elementary and Palmetto Bay Elementary],” says Hall. “In two years! Since then, we have raised and given out monetary donations exceeding $200,000 in school supplies, field trips, gymnastics programs, and support for families who need it.”

Each October, SHF accepts grant applications from local families and has supported victims of accidents, fires, illness, and other challenges.

The annual Socastee Heritage Festival, held on the last weekend in April, became a popular event, involving an annual cycle of fundraising, donor and sponsor contracts, and distribution of funds to community members.

“We didn’t even know a house was there.”

After a few years of holding increasingly successful festivals, Hall noticed the vacant property on the corner of SC 544 and Peachtree Landing Road.

The lot was overgrown with trees, bushes, and vines more than eight feet tall, completely blocking any view of the structure.

“It was sitting there as an eyesore on the corner where this major event happens,” says Hall. “We thought, ‘Look at all that space, and it’s part of the community.’”

When SHF members discovered the property was the Sarvis House, their curiosity was piqued.

“We started diving into the history, and it involves a confederate officer, and the family still lives in the area, and we were like, ‘This is a no-brainer. This is what Socastee Heritage Foundation is! It is the community, it’s this community property, it’s Socastee.’” Hall says

Reynolds, Hall, Turbeville, and other board members explored the ownership of the property, eventually securing its sale from Gene Ammons to SHF.

“When we would tell people about it, they’d say ‘I didn’t even know a house was there,’” said Reynolds.

“We spent three weeks with landscaping equipment clearing out that debris before we could see that house,” recalled Turbeville.

Over the next eight years, SHF would make minor upgrades to the house, maintain landscaping, and collect authentic period pieces from a variety of sources.

Donated pieces include the Bible Samuel Sarvis gave to his eldest son on his wedding day (which was found at a local Goodwill store); an original ledger from the Dusenbury-Sarvis store; a framed photo of Confederate Lieutenant Sarvis; a nineteenth-century organ; and a four-foot square chopping block from a meat market located across the street from the Sarvis house in the 1890s.

“Our end goal is to be able to present the house back to the community for free,” says Hall. “It already has historical documents, pictures, and antique pieces inside the house. We’d love to add more of that stuff and be able to stage every room.”

Reynolds and Turbeville have built an exterior home façade stage used for annual festivals and an outhouse as a period piece, in addition to minor upgrades and upkeep.

Eventually, SHF plans to offer it as a historical attraction and build a separate structure on the property to host meetings and events.

“We want to have it on display for schools to use for field trips; people could come in and look at the heritage and the history,” says Hall.

“Separately, we could offer a meeting and events facility that’s affordable and aCcessible to members of the community.”

All hands on Deck

The SHF and Socastee Heritage Festival joined millions of other businesses and organizations in experiencing the staggering effects of Covid-19.

The pandemic put a stop to both the 2020 festival and the organization’s momentum as it approached its 10th year.

SHF had an annual cycle of support from local businesses and had started discussions with local roofers to start more major upgrades to the Sarvis Home, yet progress on all fronts has stalled.

“Everyone has suffered because of Covid,” Hall says, “but small businesses have suffered maybe more than most. The business donations we had before, many of those businesses have shut down, so that support is gone. Some of the people we counted on for things have moved on to other industries because their industry died with Covid. So we’re basically starting over, back to square one.”

However, the SHF is determined not to let Socastee down.

With the 10th anniversary event on the horizon, Hall believes this year’s festival is more important than ever.

“We’re going to have a 2022 festival,” says Hall. “The community needs it, the vendors need it, the businesses need it.”

Hall emphasized that community support in the form of volunteered time is equally as crucial as monetary donations, and the planning begins in November.

“We can’t help the community if we don’t receive support from the community,” said Hall. “We need hands-on help, from now until the day of the event, or this festival, this organization, and this project will also be a victim of Covid.”

As Socastee and Horry County residents navigate the unpredictable, ongoing consequences of the COVID-19 era, SHF hopes the community will circle its wagons to protect and forward the Sarvis House project and ensure the perpetuation of Socastee’s cultural history. 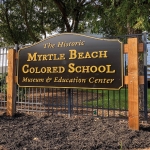 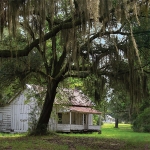 Explore history with the Villages of Hobcaw