Cooking for the family has long been considered women’s work, but this isn’t usually true in America’s restaurant kitchens. A few Grand Strand female chefs have their ideas about why their profession is still so male-dominated, with less than 20 percent of the nation’s chefs being female as per the U.S. Department of Labor. 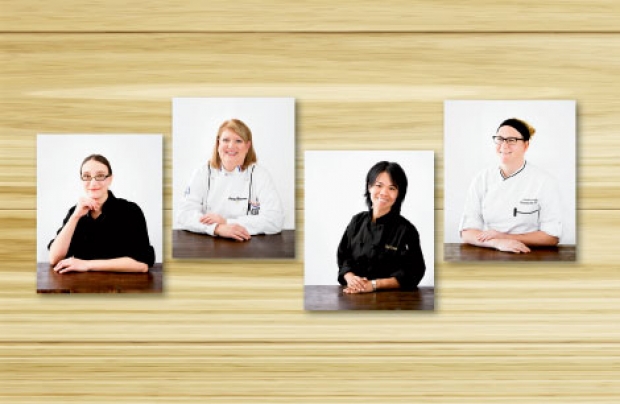 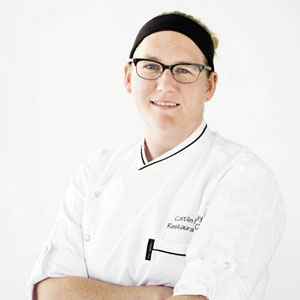 Brady agreed that chefs are a different breed. “When you have a really, really busy night and you can’t keep up and you know you have to make people happy, that pressure is what chefs like.”

As a young girl of 8 or 9, Brady told her parents she wanted to be a chef when she grew up. But she put the idea out of mind as she grew older, until her parents moved from New Jersey to retire in Murrells Inlet. She followed and soon enrolled in the culinary program at Horry-Georgetown Technical College. Her first job was at High Hammock, a restaurant in Pawleys Island where Nosh is now located. When it closed, she became the sous chef at Old Village Post House in Mount Pleasant, another restaurant owned by Maverick Southern Kitchens. A defining moment in her growth as a chef was working for Frank Lee, executive chef and vice president of the restaurant group.

Brady came to Myrtle Beach to work for Chef James Clark at Waterscapes at the Marina Inn, and 1 1/2 years ago she was offered the Vintage Twelve position. She was the restaurant’s first chef. “For me it was a great experience because I’ve never started from scratch. I got to pick out plates, pick out flatware and glasses, start looking at uniforms, things I’d never done before.”

The management has given her the freedom to prepare meals from meats and produce she buys regionally. “If your grandparents or great grandparents didn’t eat it, we shouldn’t eat it,” she said. “It can be more expensive at times to do it our way, because you have to add the labor aspect and things like that.”

When Brady isn’t working, she’s spending time with her 4 1/2 pound Chihuahua/dachshund named Rizzo (“He thinks he’s a Rottweiler.”) or working out. Since she began working at Vintage Twelve, she has lost 115 pounds. “I kind of got stuck in the ‘chefs should be overweight’ thing when I lived in Charleston.” She now does CrossFit from an hour to two hours every day.

Partly because of her exercise routine and her weight loss, she’s lightened up her cooking. “I used to do very, very heavy food. I have a lot of vegetables on each plate because we should be eating that way. I’ve gotten away from a lot of the butter and the cheese and the cream and the kind of French aspect of Southern cooking and gone back more to what Southern food is. Southern food has a whole lot of history, and I don’t want to cover that history up with cream and butter and cheese.” 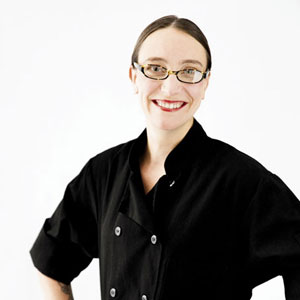 Editor's note: As our October/November 2013 issue of Grand Strand Magazine was hitting the streets, we heard the terrible news that several businesses along Front Street in Georgetown were engulfed in flames, including Limpin' Jane's. Our thoughts are with the businesses affected by this terrible tragedy.


Tracy and her husband, Bryan Shepler, don’t get far away from the restaurant they opened on Front Street in Georgetown two years ago. “We live upstairs,” she said. “I’m always at home and always at work.”

Tracy’s first restaurant job was as a dishwasher. A friend’s mother owned a small seafood restaurant and her friend, who was the cook, needed a dishwasher one night. When her friend moved along to other things, she became the cook and worked there two years. She had been working toward a psychology degree but didn’t think that was right for her.

She went to the New England Culinary Institute in Montpelier, Vermont, and then became chef at The Cider House in Waterbury, where she met her husband. She was later a deli manager in an all-natural grocery store.

The pair came to the Grand Strand several years ago to escape the cold winters of Vermont and have never left. Tracy was the chef at Crady’s in Conway for eight months while her husband was with POSitouch, a provider of software and hardware systems for restaurants. Through his work, Shepler met the owner of the Front Street building. “For the first year, it was me,” she said. “My husband was the dishwasher and we had two servers. We were doing it just to get on our feet, and it was very, very stressful. It’s still very stressful.”

After two years, she has a solid staff and business is good. Two tour boats that dock at the back of the restaurant sometimes make two trips a day with 30 people onboard, and many of them stop in to eat. The Strand Theatre is across the street, and Limpin’ Jane’s usually has large parties of diners before plays. They also attract patrons with live entertainment on their back deck, often provided by Shepler’s band, Daggett’s Torpedo.

Tracy’s signature dishes are crab and scallop cakes, shrimp and grits, and fried chicken and waffles. She uses local crab and shrimp, as well as Prestige Farms chicken, which is hormone and antibiotic free.

She has a close working relationship with Milgrove Farms in Georgetown and also buys from other local farms. “If I can source it locally, I buy it local,” she said.

The name of the restaurant is a play on Hoppin’ John, the rice and peas dish traditionally served on New Year’s Day. Limpin’ Jane is served with hominy rather than rice. But thanks to an artist friend who is responsible for much of the art throughout the restaurant, there is another Limpin’ Jane story.

A big painting facing the bar shows a woman— who resembles Tracy—with a frying pan in one hand and a dagger in the other. The story they’ve come up with for the painting is that Limpin’ Jane was a chef on Blackbeard’s ship who, to prove her worth, cut off her own leg. 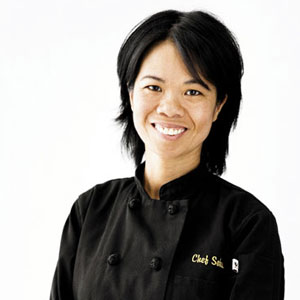 The Whiteville, North Carolina, chef has traveled and lived around the world. Nuon-Slama was born in Cambodia, where her father was targeted to be killed by the Khmer Rouge, the Communist movement led by the brutal Pol Pot.

“To save his life, what he did was hide among the Khmer Rouge and cook for Pol Pot,” she said. The family managed to escape to Thailand and then to France when she was 7. She stayed there until she married 16 years ago.

Last year, Nuon-Slama returned to Cambodia for the first time since she left as a young girl. She was reunited with a grandmother, three aunts and an uncle that she did not remember.

She said much of her cooking knowledge comes from her father. “I did not do any culinary school,” she said. “Cooking has always been my passion. I love cooking. I started cooking when I was 9 years old.”

Much of her training also came from trips she took when she still lived in France. “I was working for the government, and I had seven to eight weeks’ vacation, so on my weeks off I would travel to different countries. I could go to Italy to learn to cook Italian food, go on vacation just for food.”

They saved their money and opened a bed and breakfast in a beautiful antebellum home in the small town of Washington, Georgia.

In 2009, they moved to Whiteville, North Carolina, where they own the Southern Kitchen Restaurant, which specializes in French and Southern classics with an Asian twist. They also own Sophie’s, a Whiteville coffee shop and bistro, as well as Madison Lounge, a tapas and martini bar.

Her joy in cooking comes from the reaction from her customers.  “I just love to cook,” she said. “It’s what makes me happy, seeing how people respond.” 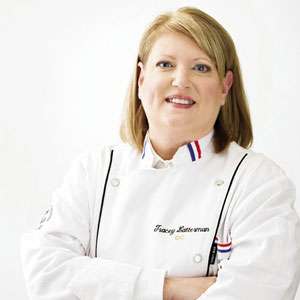 Becoming a chef was a second career for the day chef at Nosh in Pawleys Island. Latterman was a swim instructor and lifeguard until she was 35, but she had always loved to cook. Even as a young child, she preferred watching the Galloping Gourmet or Julia Child instead of cartoons.

When her husband, Dean Latterman, was stationed in Idaho with the military for six years, she decided to go through the culinary program at Boise State University. “I signed up and I’ve never looked back,” she said. She loves to experiment and cook new things.

She went to work at Nosh about two weeks after it opened two years ago. Not only is the restaurant very near her home, but she also enjoys the creative freedom she’s given there. She’s happy not to be working in a restaurant that turns out the same dishes day after day. “Most people in this area are on vacation and they’re ready to try something new and they want to try different things, and we try to do that back in the kitchen,” she said.

“Everybody can go out and get a flounder sandwich, but where can you go to get a soft shell crab and different sauces? We’re lucky to live by the coast, and here all our seafood is fresh. And we get to work with that.”

After years of living all over the country, the Lattermans landed in Pawleys Island, partly because her father lives in Myrtle Beach. She worked as chef at the Reserve Golf Club for 1 1/2 years before joining Nosh. She had previously been chef at Hilltop House Restaurant in Fayetteville and worked in the cafeteria at Travis Air Force Base.

Her favorite food to prepare is soup, and she often creates one out of ingredients already available in the restaurant. She created her lobster scampi soup for a church fundraising dinner and served it as a special at Nosh. So many people asked for it in the restaurant that it now has a permanent place on the menu.

Being the day chef means she and her husband are able to get out for walks on the beach and to go crabbing. “I cook at home pretty much all the time. I experiment, try new things. My husband is my biggest critic. We barbecue. I do a lot of Thai and Korean. My husband was stationed in Korea and really loves Korean food, so I’ve worked to master that.”

They also enjoy going out to other restaurants “to see what they’re doing and trying to put ideas together.” 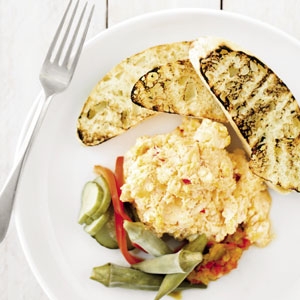 Mix all ingredients until combined. This can be done by hand or with an electric mixer. 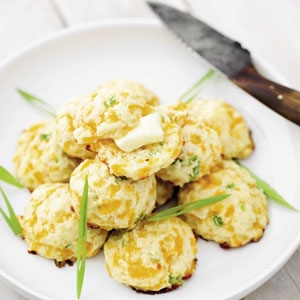 Mix all dry ingredients, cheese and green onions. Make a well in the center and add butter. Mix until just combined. Scoop (for desired size) and plop on baking sheet. Bake at 450 degrees for 6 minutes. Then turn pan and bake another 3 minutes. 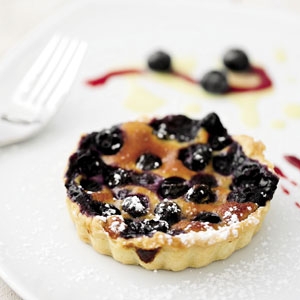 Preheat the oven to 350 degrees. In a mixing bowl, mix flour and butter. When dough starts to crumble, add one egg, 5 ounces of sugar and baking powder. Mix until it forms a ball. Wrap dough in plastic and refrigerate for 30 minutes. Get the dough out of the fridge and roll it. Spread it in a pie pan, top evenly with blueberries and bake for 15 minutes.

In another bowl, mix two eggs and 2 1/2 ounces sugar. Incorporate the sour cream and mix thoroughly. Gently add the heavy cream and mix one last time. Remove pie from the oven and cover the blueberries with the mix, spreading it evenly. Bake for another 15 minutes or until golden brown on top. Let it cool. Enjoy! 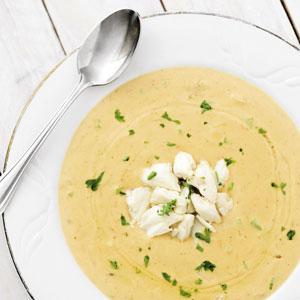