June 2020
Written By:
Ashley Daniels
Photographs by:
courtesy of ESPN 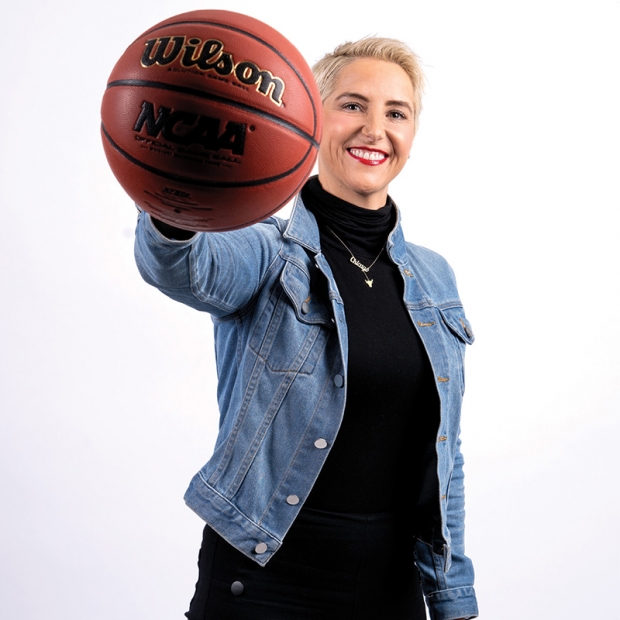 Despite living in a city on lockdown and working in a sport that’s been shut down from any tipoffs for a while, ESPN college basketball analyst Brooke Weisbrod is still keeping things positive and simple—and her chin up, in a “Chants up” sort of style.

“I like doing things that are good for the game and for the people who watch it,” says Weisbrod. “We have so much bad energy and everything out there. It’s refreshing to cover a sport that brings a lot of people joy.”

She’s currently hunkered down in Chicago, where she’s lived for the past 18 years, during the coronavirus pandemic, but the Coastal Carolina University (CCU) alumna still talks about her years as a three-sport Chanticleer athlete like it was yesterday.

“I mean, looking back, we were living in golf condos with a pool outside,” says Weisbrod. “Like, are you kidding me? To do this in college? And the Nike outlet was down the street … We were having so much fun and we laughed so much and they’re still my teammates. I was just FaceTiming two of my teammates yesterday. … I feel like our team from ’97 was one of those teams that set a different standard for what women’s basketball could be.”

The youngest of three girls, Weisbrod was born and raised just outside of Cincinnati, Ohio, in a family that lived and breathed sports, from her sisters to her aunts to her father to her grandfather to her grandmother, who she would golf with from time to time.

“So you’re talking about big backyard football games, kickball, basketball, whatever, and you would just play like that’s what you did,” says Weisbrod. “And I was always around older competition, so you constantly lose and you learn—you learn to just keep trying because you know that one day you’ll have redemption.”

And Weisbrod would, indeed, later on the college level. She says she discovered CCU at a college fair, where she picked up the school brochure with a picture of the beach on it. But, at the same time, she was making VHS copies of her high school basketball game highlights to send out to Division 1 schools, like Michigan, Pepperdine, Miami and Notre Dame

“It was like I was recruiting colleges because I was told that five-seven guards were going like a dime a dozen,” says Weisbrod. “I had no stellar high school career and I didn’t have a team that got nationally seen.”

But that only opened the door to high-scoring CCU stats on the court and on the ballfield for Weisbrod, who actually wound up attending Coastal on a softball scholarship. She batted a .256, with four homeruns and 18 RBIs for the 1998 softball team that would go on to the NCAA tournament. She also lettered in tennis. 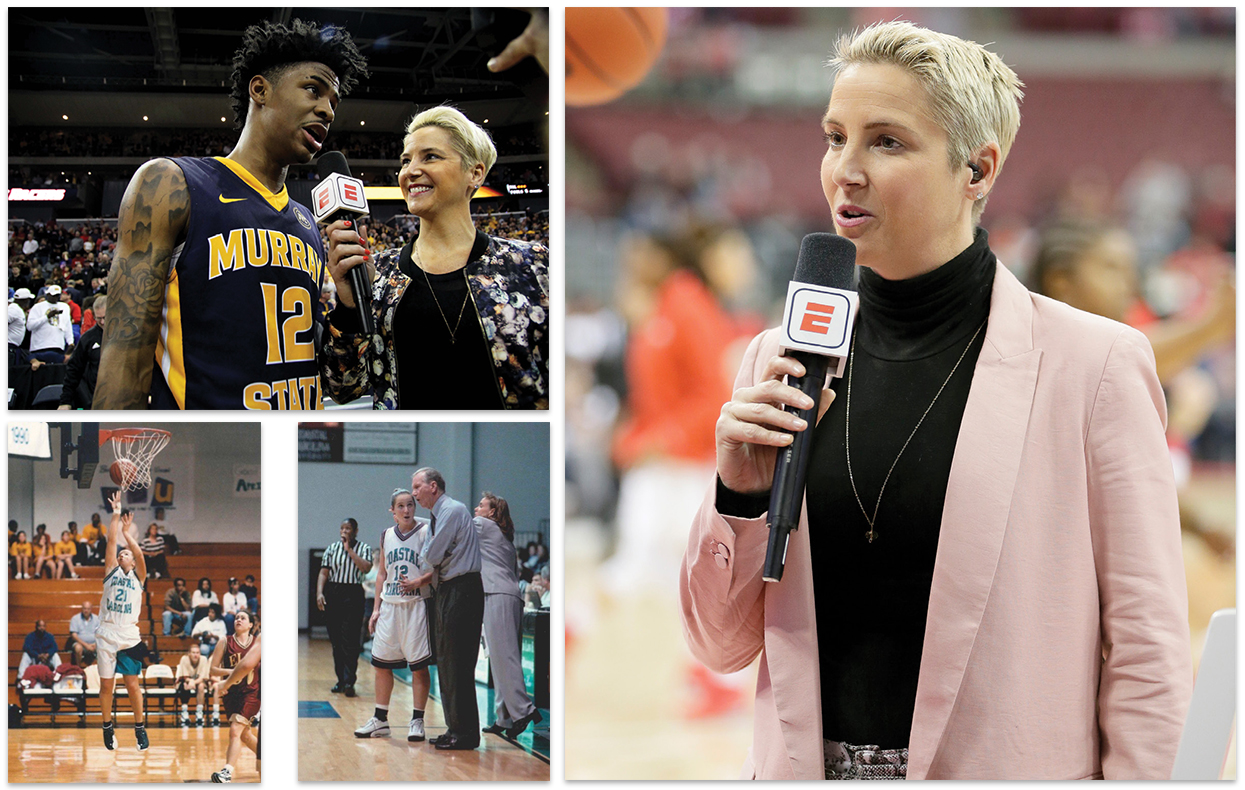 (Clockwise from top left) Weisbrod with Murray State’s Ja Morant; Weisbrod’s big break that would lead to a career at ESPN was an impromtu interview at a CCU homecoming game; Weisbrod’s basketball career at CCU would earn her national recognition.

“What I loved about our school is that we’re a work hard, play hard kind of school,” says Weisbrod. “We take education and athletics seriously and our facilities are starting to be some of the top-notch ones in the area. I love the fact that we have the kind of leadership, like AD Matt Hogue, who’s responsible for me being in broadcasting.”

Post-graduation, Weisbrod got picked up by the Marburg Marlins, a professional women’s basketball team in Germany, but only played for a year because of a back injury.

“I remember that flight home from Germany in 2002 thinking I had no idea what I was going to do or who I am, and I was feeling pretty detached,” she says.

The “A ha!” moment came a few months later, when Weisbrod was sitting in the stands of her alma mater at a homecoming basketball game and Matt Hogue, then serving as the announcer, called her down to the court for an impromptu interview.

“It was literally a life-changing moment because at first I didn’t want to do it, but then in the middle of the conversation it just sparked that this is what I wanted to do: call the game. It was that simple of an inspiration,” she says.

After a year or two of voice, improv and acting classes, Weisbrod began covering events for ESPN in 2004 as an analyst, sideline reporter, radio and TV host.

“Those classes helped break me of what sometimes can be an athletic mentality,” she says. “You know, sometimes we’re so used to people telling us what to do that it’s hard to break that out of our personality … We’re so used to being serious in a game, but now look at it as entertainment and, along the way, you’re discovering yourself publicly and a confidence in a different way.”

Through 2012, Weisbrod would not only freelance for ESPN on the weekends, but also work weekdays in the scrap metal recycling industry. Since 2012, she’s been working full-time with ESPN, covering men’s and women’s college basketball, and the NCAA Women’s Basketball Championship, plus serving as a studio analyst for ESPNU. As a sideline reporter, she’s covered college basketball and football.

“This is a way that I can stay tied to the game and the love that I have for it,” she says. “It’s taught me how to just listen better in the moment. It’s not so much about what I’m saying, it’s how I’m hearing it from a player. It’s feeling the rhythm of when to talk and when not to talk. … In the end, we get paid to cover a game. How blessed can I be?”

Over the past 16 years of covering game after college game, Weisbrod says what has remained a constant are the overarching stories showcasing similar reasons athletes like to play the game and are connected to it. But what has evolved is the increasing respect for women’s athletics. Another thing, she says, that’s drastically different from what she hears from coaches, is communication and social media.

“There’s been a shifting culture in the last 15-20 years with how athletes are treated and how they want to be motivated,” she says. “It’s more of a mental level than it used to be for us, which was all tough and get on the line and degrade you and sometimes push you there and you can’t do that anymore.”

Another outlet for Weisbrod’s love of the game is through her nonprofit, Skills and Score, offering free summer sports and arts camps for Chicago’s public school students.

“I was looking for ways that could encompass any type of situation where you learn a skill and you score some confidence,” she says. “We try to encourage really having fun with fundamentals and the basics, because I think that’s really missing. The schools consistently have resources cut.”

In her spare time, Weisbrod travels to events and universities as a motivational speaker for women in sports and media training in confidence. Downtime also includes playing some tennis and spending time with family and friends, and her chocolate lab, Willis.

What does the future hold for Weisbrod—someone who doesn’t give up? She wants to own a team in the WNBA.

“I’m always trying to grow and look into new things and be inspired by what Kobe did right after his NBA career was over,” she says. “I enjoy challenges and they also scare me to death. But I’m going to keep on doing things that stretch out my comfort zones, because it’s easy to get comfortable.”