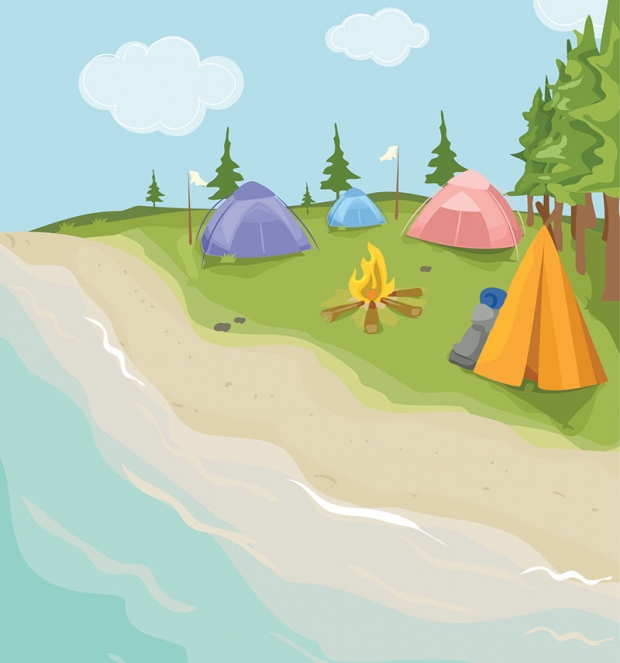 Having grown up on the edge of the wilderness in upstate New York, I have a long and loving history with tent camping — one that started well before I joined the Boy Scouts. When we were kids, it was easy to find pals to camp with, whether in the backyard, the back 40, the 40-acre wood, or the short trip to the Adirondack Mountains. But that would change. I noticed by the time my teenage years were waning and the stresses of life began to take over, those opportunities and those camping pals both became scarcer, though my desire to reconnect with nature did not.

I’ve discovered that the older one gets, the harder one has to work at finding camping partners. You’ll likely observe your friends, spouses and significant others are all a bit reluctant at the mere suggestion of anything resembling roughing it. And when I say “camping,” I don’t mean hop in a pimped-out RV and plug in to all the comforts of a five-star resort, or even glamping, an upscale version of camping popularized in the last decade. No, when I say camping, I mean something traditional, very 1945, very Mark Trail, Robert Baden-Powell, and all that.

Nothing against those who call “camping” anything other than staying at home. You could, I guess, park in front of Walmart and call that camping—many do. But what I have in mind dates back to my recollections of boyhood. Our camping meant no frills, nylon (or canvas) tents, uncooperative tent poles, Coleman stoves (or wood cooking fires), inflatable and mysteriously leaking ground pads, sleeping bags (too hot or not warm enough), flashlights with dying batteries and ineffective mosquito repellent. Oh, and a transistor radio…and comic books. Lots of comic books. Most important.

This is not everyone’s favorite way to spend a night or two, but it may be yours. It certainly was mine. Maybe, like me, you want to relive those carefree days of your youth? Or discover what you may have missed out on?

When you have a few days free, the weather forecast calls for fair skies and moderate temperatures and the urge to merge with nature strikes, you may have to go solo, which is just what I did recently, opting for two nights at Huntington Beach State Park in Murrells Inlet.

I prefer backcountry camping on the banks of lakes or streams in National Parks or National Wilderness Areas, which are abundant in northwestern South Carolina and western North Carolina, but typically a four- to five-hour drive from the Grand Strand. There are tent camping options closer to home in the Francis Marion National Forest south of Georgetown, and while there are wonderful trails for hiking, the camping there is a bit…umm…swampy (Marion wasn’t called the Swamp Fox for nothing).

Our two area state parks, Huntington Beach State Park and Myrtle Beach State Park, both offer primitive/rustic tent-only campsites. Though “primitive,” they’re not far removed from potable water, hot showers and bathrooms. They are, however, nestled in and among the trees and are somewhat removed from the family and kid-saturated RV campers in other parts of the park. Still, though neither offers the solitude and wilderness experience you may be fantasizing about, both parks offer a safe and fulfilling way to spend a day or two on the beach, hiking or biking in the woods, and a night or two under the canopy of trees with plenty of critters scurrying around each night to remind you that you are indeed camping.

With my Huntington Beach State Park campsite paid online ($35–$40 per night, depending on time of year and demand), I was pleased to find not too many tenting neighbors. The mid-morning sun hadn’t yet spoiled the cool shade of my site, making the task tolerable. The worst part of camping is the first 30 minutes and last 30 minutes. I popped the hatch on my SUV and grabbed my large dome tent from crates of gear big enough to make even Bass Pro Shops blush. I’d set this tent up many times, so it went OK, though it’s easier as a two-person job.

With my tent staked down, the rest of the setup was a matter of throwing things from the car into tent’s doorway. The cooler (with food, ice and beverages for a week), stayed in the car, along with my Coleman propane stove and lantern, safe from marauders. Car unloaded and gear set up, my home away from home was quite charming.

First order of business—a bike ride. The Wildlife Center, which burned in 2019, was under construction and not yet open (though it may be now), so I opted for a little gator viewing along the causeway and was not disappointed. A variety of long-legged seabirds pranced through the pluff mud, while scores of unidentifiable birds soared overhead. Huntington Beach State Park is known as a birder’s paradise. I struck up a conversation with a semi-retired wildlife photographer sporting a lens at least two-feet long. He and his wife invited me for happy hour. Though alcohol is forbidden at all SC state parks, my observation has been that this is rarely enforced unless you’re an idiot; kind of a “don’t ask, don’t tell” amendment for responsible adults.

The conversation was relaxed and engaging and led to a dinner invitation, which I accepted after retrieving my own cooler full of food; my trusty collapsible wagon provided easy transport. Tom and Melinda, both in their 60s, were visiting from Northern Virginia and were gracious hosts. They stayed in a small RV flanked by tent campers on either side.

Though the park was at 100-percent occupancy, the couple had been lucky enough to stumble upon a cancellation. They were headed from Florida to the Outer Banks and had heard wonderful things about Huntington Beach’s birds. They weren’t disappointed. They spotted bald eagles, wood storks, multiple versions of egrets and herons, ibis, and a bird they wouldn’t stop gushing over: a painted bunting. Me? I saw a seagull of some sort.

After dinner and a few more beverages, my cooler and I excused ourselves and rolled the 100 yards back to my own little chunk of pseudo wilderness. After a hot shower at the nearby bathhouse, I settled in for a little light reading, and by 11 p.m. the park was silent, save the frogs and chirping night birds. I slept soundly.

The next morning, around 7 a.m., I took time to cook bacon, eggs and hash browns, had a small pot of French Press coffee, donned my swimsuit and set out to enjoy the beach. By noon, I’d had enough sun, sand and surf, and wandered back to my campsite. After a roast beef sandwich and a nap in my portable recliner, I hopped on my bike. Tom and Melinda had moved on. I ventured toward Atalaya Castle ($2 admission), the ruins of the oceanfront art studio and sometime winter home of Anna and Archer Huntington (Brookgreen Gardens’ founders).

Around 3 p.m., the skies turned gray as I rode my bike back to the campsite. As I arrived, so did the rain. I jumped in the tent, big enough to accommodate my chair, and enjoyed the light, steady tap in drips on my tent rainfly. I stayed dry, and even cool, thanks to a battery-powered fan. A little more reading and a few YouTube videos on my iPhone, and I stretched on top of my sleeping bag while the rain and distant thunder continued its hypnotizing lullaby. I slept until 6 p.m.

The rain stopped, the sun re-emerged, and new neighbors setting up a tent in the next campsite over awakened me; two younger guys on college break for a little fishing. We chitchatted. I cooked a steak on a portable charcoal grill, and opened a prepackaged salad for dinner. I couldn’t help but notice that my neighbors were searching for something.

“Hello!” one called out, “Do you happen to have a corkscrew?”

“Actually, I do,” I answered, rummaging through my gear. “Bring your chairs and come over and join me if you’d like.”

They brought their chairs, wine glasses and an unopened bottle of something red. We chatted while I finished eating, apologizing for not having steaks for them. As these youngsters struggled with the tiny Swiss Army Knife corkscrew, I held my tongue and let them figure it out. The fire ring was ready to go with wood I had purchased from the camp store ($12). It lit easily. The guys went back to their campsite to retrieve hot dogs and long, telescoping cooking spears as we shared my fire and they shared their wine.

Four hours and three bottles of wine later, they retreated to their tent. After I cleaned up, I crawled back into my own. Checkout would be at 11 a.m. the next day. This was not the solo trip I had expected, having been placed in the midst of thousands of campers and day-use visitors and having made friends without trying, but it was just what the doctor had ordered. At less than 30 minutes from my Myrtle Beach home, both area state parks have provided similar trips through the years, when I can’t afford a longer getaway. I hope for many more of the same and encourage you, too, to seek out your inner hinterlander. Don’t forget the comic books.