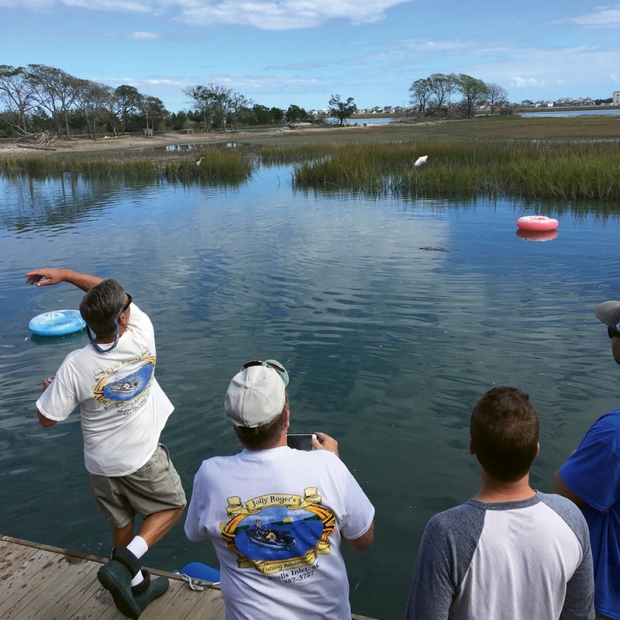 PHOTO: Jolly Roger tosses a fish in the second competition of the day, the mullet toss.

The mullet, by almost all accounts, is not a gamefish. That is, no one goes out mullet fishing with anything like traditional tackle in the hopes that a mullet will put up a sporty fight. And you’d be hard pressed to find a cookbook with a mullet recipe or a brand of clothing with the mullet as its logo. Perhaps the most celebrated fact about the mullet is that it inspired the haircut of the same name.

The mullet’s best use, then, is as a baitfish. “Finger mullet” are caught in a cast net, hooked through the lips or between the two dorsal fins, and chunked out as an offering to the fat, flat, delectable flounder for whom the mullet is prey.

Still, that fact alone makes the mullet a necessary fish in a place like Murrells Inlet, which all the gift shop T-shirts declare to be “A quaint little drinking village with a fishing problem.” (One may also notice that the town name has the word “mullet” embedded right there within it, as if one could say, “You can’t spell Murrells Inlet without mullet!”).

So it makes perfect sense that Murrells Inlet would have both a quaint little bar called The Mullet Hut and, every fall for the past five years, a quaint little fishing competition called The Mullet Hut Mullet Tournament and Toss. And it would make further sense that presiding over it all is a mullet-colored four-year-old cat named (what else?) Mullet.

Well, I suppose it’s fair to say presiding over it all is actually an actual person, Captain Robert Thompson, who says that he came up with the idea for the Mullet Tournament five years ago out of sheer boredom—a way to pass the time when the flounder bite was slow.Rather than boredom, though, I enter the 2017 Mullet Tournament out of sheer curiosity. I’d heard about the famous Mullet Toss every spring in Flora-Bama—an event that draws thousands of people to see how far they can toss the fish. But here was this competition not two blocks from where I live. 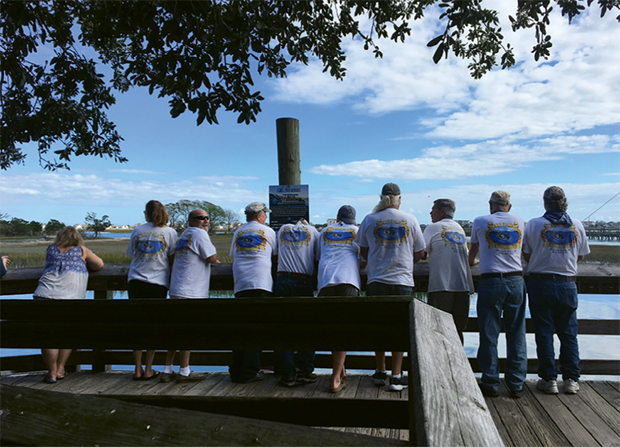 PHOTO: Spectators check out the action in the mullet toss.

And I’ve always loved quirky competitions. The first magazine article I ever published was about entering a frog-jumping contest, and since then I’ve attended the US MiniGolf Masters, the Loris Bog Off, the US Disc Golf Championship, Dock Dogs, the Salley Chitlin Strut—all sorts of oddball contests across our state.

What, then, could be better than a local Mullet Tournament? It only cost $10 to enter and the prize money wasn’t too shabby—$200 to first place and $100 to second place, plus some spiffy silver mullet medals.

Also: how hard could it really be to catch a big mullet? Every time I go fishing, after all, it seems the mullet are everywhere—jumping joyously and flashing ray-finned throughout the marsh creeks. I mean, once a mullet even jumped right into the cockpit of my kayak while I was out paddling near Drunken Jack Island. Surely it couldn’t be that hard.

“Got any dynamite?” one of the old salts up at The Mullet Hut asks when I pester him with mullet-catching questions.

I do know how to throw a cast net. But I also know someone who can toss one even better—my best buddy, the Murrells Inlet charter fishing captain Jolly Roger, who, after some prodding, agrees to spend his Saturday not going after gamefish like he normally does, but taking me out for mullet.

We meet in the pre-dawn, a little before 6 a.m., at his house on the creek. As instructed, I’m wearing gear for the possibility of a cold rain—muck boots, waterproof pants, a hoodie and a beanie. A thin sliver of orange has appeared on the horizon, and down to the boat we carry buckets, cast nets, coolers.

This is the perfect time, Jolly Roger says, to catch mullet—two hours before the Dead Low, as the fish begin to swim through the channels while the tide races out. We anchor down at a spot he calls Smith Point—an intersection of three creeks near his dock—and he begins instructing me in the finer points of cast-netting and mullet-catching.

“We compete with no one but the fish on this vessel,” he says, and it strikes me as sound advice for any kind of fishing, whether for marlin or mullet. “The fish have more brains than anyone else out here.”

Still, even though this is a dirty and low tide fishing excursion—and even though flounder are, weirdly, an afterthought in a mullet tournament—catching mullet requires athleticism. To throw a cast net perfectly is to do something with pure mechanical form, like hitting the perfect golf ball or dancing the perfect waltz.

It takes a learned repetition of motion. It takes the grace of art. Jolly Roger, for his part, can throw a cast net each time so that it opens like an atomic cloud over the surface. My first few throws, however, resemble tacos.

Still, I love the sounds of cast-netting—the net whisking through air, splashing in water, getting reeled in one fathom at a time, the weights clunking on the deck. And once I re-learn the hang of it—the retrieving and tautening of the line, the shaking the net free of mud and grass, the balanced handling and discus-like motion, the snap of the wrist when the net hits bottom—I’m able to pull in one half-pounder among all the finger mullet.

Surely, we reason, this half-pounder is a sign of things to come. Surely the three-pounder trophy mullet is up next.

But then things slow down. We catch no mullet in Papa’s Hole, nor in the Charlie Cut, nor at The Jetties, nor off Huntington Beach. We see one guy with a 20-foot net, casting it in a dance that looks like ballet. When I yell to ask how he’s doing, he gives me a thumbs up, and I’m depressed.

“I’m telling you,” Jolly Roger keeps saying, “we’ll get the big one off my dock when the tide comes up. Or across the street at Jerry’s Hole.”

His prediction comes true. We nab two three-quarter pounders—one off his dock and the other across the street, where a drain pipe spills out beneath a tangle of underbrush in Jerry’s backyard: a.k.a. Jerry’s Hole.

When we get to the scales at The Mullet Hut, though, everyone laughs. Even the 13-year-olds have us beat by two pounds. It’s a bit embarrassing—the stakes were so low that they ended up being high.

But the great thing about this event is that it’s a contest of second chances. (One might say, then, the event is like the haircut: “business in the front, party in the back.”) For once the fish have been weighed and the prizes given, it’s time for the Mullet Toss. Unlike Flora-Bama, where one throws a mullet for distance, this is about accuracy.

Captain Thompson places two plastic inner tubes, weighed down with bricks, into the inlet—one close by for the kids, one farther out for the adults. The MarshWalk crowd gathers. It’s a dollar a toss. The pot keeps growing until someone launches the dead mullet into the inner tube.

People keep trying. Jolly Roger tries a few times, even hitting the inner tube, unlike the air balls most people throw. I try a few times, my arm sore from the day’s cast-netting.

No one can do it. Yet—on my second time around, with my ninth fish, as the pot has climbed upwards of $150—I toss the perfect mullet. It arcs through the air, cold and stiff, and lands right smack in the hole. The crowd goes wild. I am the LeBron James of dead baitfish. I am the Kobe Bryant of mullet.

I collect the money and tell Jolly Roger the next beer at The Mullet Hut is on me. After all, he’s got a boat to clean, and we’ve got some of that smoked mullet dip to try.

Oh, and also: we need to start strategizing about next year, when surely we’ll catch that three-plus pounder.

Take the pledge to put down your phone while the wheels are turning
GENERAL TAGS:
t-shirts / art / tacos