Thoroughbreds Chophouse & Seafood Grille has clung on to its fine dining pedigree since opening in 1988. That stat alone is impressive, before adding the fact that the restaurant has survived in a section of Restaurant Row that feeds off tourists’ big appetites for all-you-can-eat deep-fried seafood.

Thoroughbreds’ exterior is a hodge-podge of facades, from the tinted windows of the Paddock Porch to the turret that circles above the entrance foyer to the massive two-story barn-like building in the back. Inside, she’s a true beauty—and unlike the nautical norm of Myrtle Beach—with rich, wood-paneled walls, low lighting and romantic fireplaces throughout the maze of dining rooms on two floors.

A gorgeous, well-appointed bar peeked through the other side of the frosted windows of our dining room, The Jockey Club. It’s all reminiscent of a debonair 1940s supper club, where ladies wore elbow gloves and men hung their derbies at the door. A place where you had to know someone to gain access. It’s a restaurant that you want to show up to wearing something a little more than your favorite beach uniform of cut-off shorts and a T-shirt or a wet bathing suit under a cover-up. Go home, change and dress up for dinner for a change.

The wine list is a consistent award-winner, so we ordered a bottle of cabernet, which was smooth, with a kiss of cherry. Thoroughbreds’ menu is laid out to pay homage to its namesake, from The Starting Gate appetizers to The Homestretch of desserts. Although a small plate of Oysters Thoroughbreds sounded tempting (oysters on the half-shell topped with wilted spinach, bell peppers, onions, Applewood-smoked bacon, Japanese breadcrumbs and béarnaise sauce), my carnivorous husband and I skipped to the Belmont Steaks portion of the entrees.

Tableside service is a dying culinary art, so I jumped on the chance to experience it here at Thoroughbreds, one of the few establishments to still support it. We ordered the Chateaubriand Bouquetiere, a dinner prepared for two. Chateaubriand is a slow-roasted and specially seasoned beef tenderloin. According to my chef husband, it normally uses the thickest center section of the tenderloin, which is why it needs to be slow-roasted. In between doting on our 6-month-old son, also seated in his car seat tableside, our server rolled over a serving table with a hot plate to flame the tenderloin, fresh asparagus and sautéed mushrooms tableside, then carved and served the sides, along with a dish of creamed spinach and two ramekins of house-mashed potatoes. The asparagus was young and fresh and the mushroom caps were salted, sour and sublime.

I loved the specialness of the preparation during tableside service, seeing our server and assistant sizzle the beef to medium heat, meticulously flip the asparagus spears and prod the soaked mushrooms. The beef tenderloin was tender, delicious and perfectly cooked. With four sides, a handful of carved beef medallions and a basket of warm bread and garlic butter, this was a couple’s entrée portion size that was easily filling.

Other entrees our server recommended was their prime rib, available in 8, 12 and 16 ounces, and the Waimea Bay Ahi Tuna listed in the Seabiscuit section of the menu. The ginger-seared tuna is flown in from Hawaii and paired with toasted pecans, bacon, haricot verts, pearl onions and wasabi yellow corn grits.

We considered another tableside service for dessert with the Flaming Bananas Foster, but just couldn’t manage another bite—not even for the sweet entertainment factor.

Don’t be afraid to make a reservation for dinner at a fine-dining restaurant like Thoroughbreds. No, really. And there’s no need to limit the visit for only a special occasion. Thoroughbreds is as affordable as the overpopulated seafood joints around here, but just misunderstood in its fancy britches. It’s what’s served from inside the kitchen—and the prices on each plate—that counts. 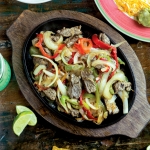 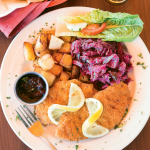 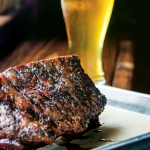 Bring on the Brisket