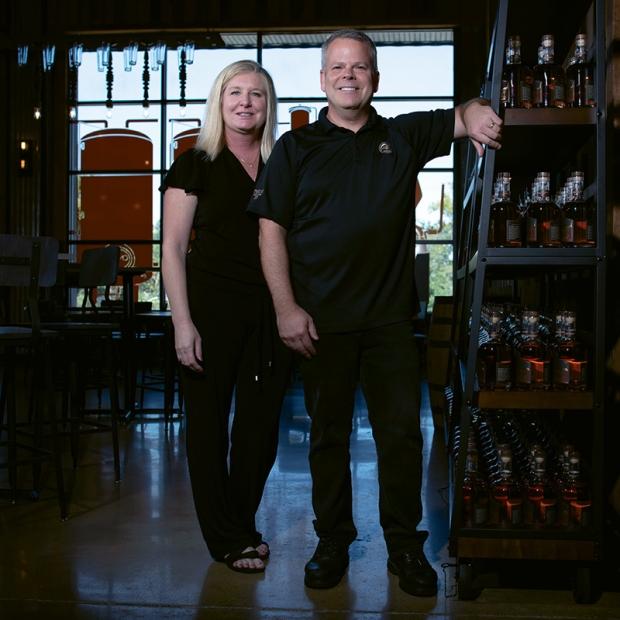 Rebecca and Kevin Osborn opened Twelve 33 Distillery in Little River after moving here a little over a year ago.

It’s no secret that folks are drinking in the rise of craft breweries and distilleries, as more and more are pouring onto American soil (folks 21 years old and over, of course).

In 2018, there were more than 7,000 breweries operating in the United States, and, according to the Brewers Association, about 1,000 more are expected to open this year. Not only is the amount of breweries on the climb, but also the amount of beer produced at small, independently owned craft breweries—5 percent more in mid-2018 than the year before.

Why? Today’s customers like that feeling of exclusivity in an experience that’s uniquely theirs, where you see for yourself where the beer or spirits are made, meet the maker, take a tour, and take a taste then and there. They tap into that inside connection. And along with the whole local community connection comes the appeal of those organic, high-quality, locally sourced ingredients often mixed into their small batches.

The Grand Strand has two such local companies led by husband-and-wife teams doing exactly that—one with a distillery, the other a craft brewery. Here’s a taste of each couple’s passion for the business, the artistry and the science behind what they do.

Owners Kevin and Rebecca Osborn are on the edge of their padded brown leather seats in their speakeasy room hidden behind a paneled wall in Twelve 33. They’re excitedly recounting their journey from California to Little River a little over a year ago.

Rebecca has a background in retail and teaching; Kevin, a former corporate executive dabbling in winemaking for 14 years. He actually started brewing beer as a hobby while he was a student at Michigan State University, where the two met. No matter beer, wine or spirits, Kevin’s hobby would soon turn professional when the company he worked with as a business executive for 26 years was sold.

“I was considering going into spirits anyway, and we were looking at opening a distillery in northern California or maybe Arizona,” says Kevin, “but then we thought of how we have family here in North and South Carolina and saw that there was a favorable market and there had never been a distillery right here before—there are only 17 distilleries in South Carolina.”

The numbers aligned and the Osborns moved to the East Coast. Kevin was already armed with the distilling know-how pulled from friends who owned a craft distillery in northern Michigan, workshops at Cornell University, and distillers certification courses in Louisville, Kentucky.

The massive Twelve 33 building was beautifully designed into the bones of a former beach store, with wall-to-wall windows, clean woodwork, a sleek window display of all the metal distilling tanks and equipment, and an overall marriage of modern and rustic elements. While the distillery only opened its doors for business a few months ago, it’s taken less time than that for Twelve 33 to become the area’s new favorite neighbor.

“The feedback has been unbelievably positive,” says Kevin. “And I was concerned about it coming in because there’s never been a distillery here before and a lot of people haven’t done spirits tastings before, where, in metro markets, it’s a big thing. It’s unbelievable how quickly the attraction has been this early on with the locals that now we’ve become their liquor store.”

Twelve 33, coined from the date that Prohibition ended on December 5, 1933, produces nine handcrafted spirits made from locally sourced grains and fresh ingredients: vodka, gin, rum and whiskey varietals. The difference in their recipes, they say, is the infusion of those fresh ingredients in small batches. Three Peppers Vodka, for instance, blends locally grown jalapenos, habaneros and Carolina Reaper peppers for a spicy bite. Plus, the spirits’ names themselves are all directly tied somehow to the spirits of Prohibition past.

“Our gin is called Jo-Jo, named after the jo-jo bottle flask made by the South Carolina Dispensary,” says Kevin. “Our Mullet Creek Silver Rum pays tribute to a creek right here in Little River, the offloading point for illegal rum runners during Prohibition.”

The creativity not only flows through the Twelve 33 brand, but also into every last drop of these bottled spirits. 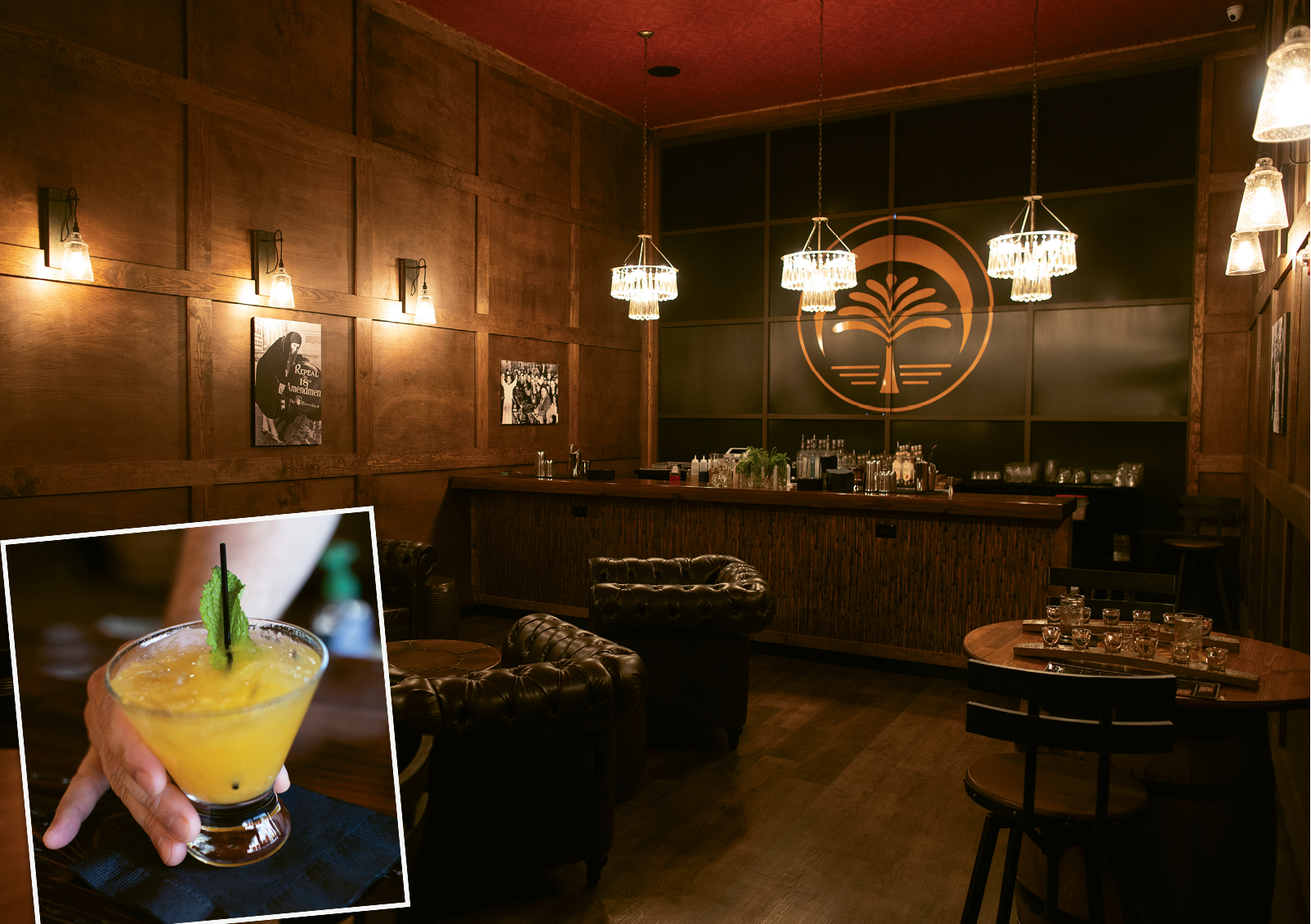 You’ll be privy to Twelve 33’s hidden speakeasy at the conclusion of their VIP Tour.

“It’s all about the ingredients you use and your production process,” says Kevin. “You want to put together what you think people will really like, but also products that are intentionally different than others out there.”

For example, Kevin explains that their Jo-Jo Gin is much different than the London-inspired dry gins that overrun the market, i.e., Tanqueray, Bombay Sapphire. It’s an American-style that blends more orange peels and coriander for a more floral-citrus-spice finish.

If Twelve 33 were a restaurant, Kevin would be considered the head of the back of the house, with Rebecca running the front. The couple just celebrated 26 years of marriage. Rebecca’s years in retail lends well to manage the front retail space, tasting room and bar staff, known as “spirit guides.”

“And I’m the one behind the glass wall managing production,” says Kevin with a laugh. “A consultant once told us he loves husband-wife owners because they’ve lived and worked together personally for a long time and they usually can get things figured out much more quickly than when you get into corporate partnerships. And I think we do that.”

Twelve 33 has also become a family business. Their daughter, Alexandra, a recent graduate from UCLA, is now working as marketing manager, and their son, who just transferred from UC San Diego to Coastal Carolina University, is helping Kevin with production.

Adults 21 and over are invited to stop by to sample from Twelve 33’s tasting menu, order from any of the dozen seasonal signature cocktails or take a guided tour of the facility.

Looking ahead, you’ll be seeing more of the Twelve 33 brand on local restaurant drink menus and the venue will be hosting more private events over the holidays, as well as weddings.

“It’s really cool to go to a restaurant and see our bottle on the bar top,” says Rebecca.

“We built this distillery the way we did and with the intention to have people experience it all onsite, rather than having a distillery focused on production in an industrial park,” says Kevin. “We want customers to sit down and taste it and we can show them exactly how everything is made.” 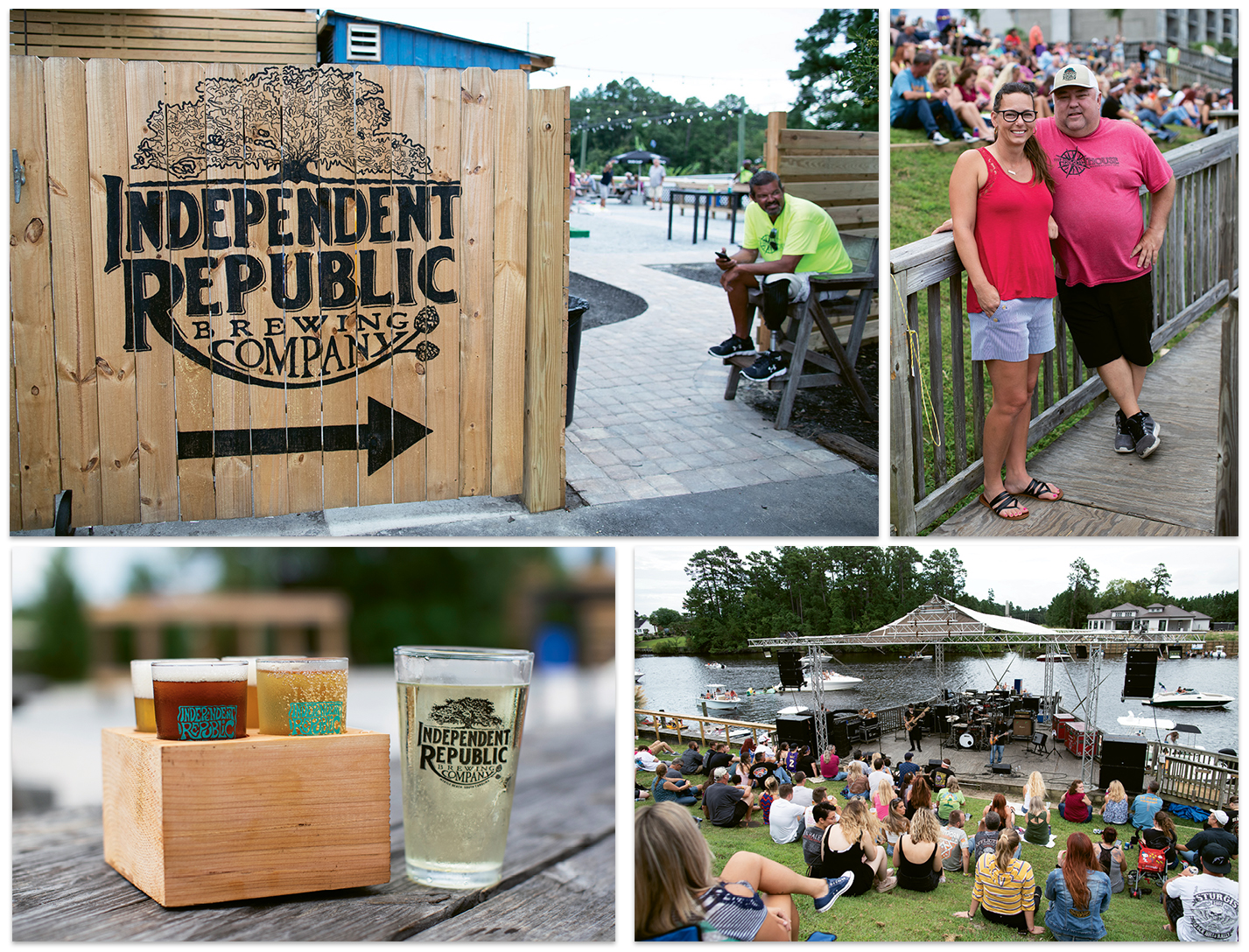 Success is brewing for Misty and Tripp Coan (top right), who just opened their latest expansion, the Independent Republic Brewing Company, complete with an all-new biergarten, a half-dozen drafts and beer tasting flights. The summertime Sunday night waterfront concerts continue, like this one featuring the band Gray Sky Revival.

For nearly 15 years, outdoor concerts at the Boathouse, which juts out of the steep banks of the Intracoastal Waterway near the U.S. 501 bridge, have been a Sunday night tradition. But, never ones to settle, owners Misty and Tripp Coan are always looking at ways to start new traditions and adventures.

“Sometimes in our lives, he has the ideas,” says Misty. “And then he just kind of hands me the idea and he’s like, ‘OK, this is what I want and make it happen.’ And that’s when I come in and tell him he has a solid idea, but this is what I’m thinking. So I would say that our marriage is like that—we’re the idea people and we work off each other.”

Tripp was born and raised in Conway before his family moved to the beach. Misty is originally from Landrum, outside of Spartanburg, but moved to Myrtle Beach in 1994 after one year of college and never went back to the upstate.

The food industry was one she had a working relationship with since she was 15, so she and Tripp opened their first restaurant, the Atlantic Grill, in 1999 when she was only 24. The couple has been married for 24 years.

Today Misty is perched on a stool atop the new covered deck and biergarten built onto the south side of the Boathouse, its next phase in the form of Independent Republic Brewing Company, which opened in April.

She checks her watch off and on; it’s a wonder the restaurant entrepreneur and mother of two sons, ages 19 and 14, can sit still with all that’s on her plate (she hasn’t had a day off in two years). Misty just came back on board at the Boathouse earlier this year after a business partner parted ways. For the last decade, her baby has been Lulu’s Cafe, which serves breakfast and lunch on Ocean Boulevard.

“I decided that if I’m going to come back on, I want to remodel, revamp, and do some different things,” says Misty.

And that she did. The Landing at the Boathouse (the restaurant portion) received a menu facelift. Plus, her friend of 15 years/co-worker at Lulu’s/neighbor/now partner at the brewery, Sean Taylor, had been home brewing beer and mentioned to Misty that it’s always been a dream of his to open a brewery.

“He and Tripp drink beer at night and we all sit around the house and talk,” she says, “And so I said, ‘You know what, let’s kind of combine these two businesses and let’s do it. We’ve got plenty of space here!’”

The beach volleyball court was stripped, recovered with gravel and transformed into an outdoor dining/drinking room overlooking the waterway, with rows of tables Misty helped to build, along with a couple of cornhole boards. Then there’s the addition and extension of the covered deck decorated with strings of lights overhead and the outdoor bar featuring a row of about a half-dozen Independent Republic Brewing Co. (IRBC) craft beer taps.

The Nellie Light, IRBC’s flagship beer, is named after the Coans’ dog, Nellie (think Bud Light, only better); Milkshake Mustache rotates out with guava, pina colada or passion fruit; and Porch Beer is named after the kind of beers Tripp and Sean would sit down with after work to drink while they talked.

“Sean loves the creativity aspect of it and, with small batches, being able to blend these great, local ingredients together,” says Misty. “He really does have the passion for it and he likes to drink beer and he’s always looking for that next thing. He called me at 10:30 the other night to bounce an idea off of me.”

That IRBC name is grounded in the fact that it’s the only brewery outside of Myrtle Beach city limits and the Coans and the Boathouse have always been known to be here for the community, from free concerts every Sunday to hosting fundraisers and more.

Right now, IRBC operates on a two-barrel system out of the restaurant’s kitchen, but the goal is to make more beer and outgrow their current operation facility. This summer has been one of the most successful at the Boathouse.

“I like a new adventure,” Misty says. “I think that’s why I like everything I do—the adventure and having an idea and doing the work and getting up to look for a new adventure. … I get up every morning and say, ‘What’s going to happen today?’”