Sometimes a blind date can open your eyes to a whole new level of love pulsing within your heart. Kathleen and Brent took the risk and braved the anxiety that comes with a blind date and, a little over a year later, these two hearts walked down the aisle.

Kathleen’s matchmaker was now sister-in-law Kayla, who also doubled as Kathleen’s trustworthy hairdresser. “We both had just gotten out of a relationship, so we had said no for about four months until he called me directly,” says Kathleen. “Once we were on our date, we found it was so easy to be together. Nothing was forced, and it never felt uncomfortable.”

Now that he had her heart, the next natural step for Brent was to ask Kathleen for her hand in marriage.  And he went all out, scavenger hunt-style, starting with a note left for her at his house that let her know a limo would soon be arriving. The chauffer drove her to Holmes Springs Park in Myrtle Beach, where she followed candles that lined the sidewalk and led to a table set under a beautiful live oak draped in hanging candles.

“While I was reading a second letter, a couple from our church began singing, ‘Will You Marry Me?’ by Train as Brent started to walk toward me,” says Kathleen. “Brent got down on one knee and asked me to spend forever with him, and I, of course, said, ‘Yes!’”

From there, plans for a summer wedding commenced. Kathleen envisioned an elegant Southern garden party theme for the ceremony and reception, which were indeed the results on June 6, 2015, outdoors at Caledonia Golf & Fish Club in Pawleys Island.

About 20 minutes before the ceremony, however, a downpour, or what Kathleen sweetly describes as a “good luck blessing,” interrupted the tranquil setting. “The skies opened up and the rain began to pour,” she says. “But just as everyone was about to give up hope for a wedding underneath the beautiful mossy oaks, God parted the clouds and brought the most beautiful sunshine, painting the perfect setting for the outside ceremony.”

After that, the trees glistened in the sunlight, the heavenly harp played, and the large 10-foot-tall wooden cross Kathleen’s dad built stood like a fortress at the altar, embraced with vines and kissed with pink roses. “It was important for us to have elements of the church outside, since the ceremony wasn’t held inside a church,” says Kathleen.

The celebration continued with the reception under a white tent, like a canopy of clouds drifting above Kathleen’s natural, outdoor décor of tall potted trees, strings of white twinkling lights, and light, ivory, fluffy flowers. The bridesmaids were pretty in blush gowns and the groomsmen stately in navy tuxes.

Kathleen’s gown was quite a departure from her pageant days. “I went with something totally opposite, with head-to-toe lace and not a single rhinestone or jewelry accent on the dress,” she says. “I wanted it to be a timeless piece.”

It was important to the couple for family and friends to have fun and let loose with the band, so they booked popular wedding band Tru Sol. The groom continued his music selection talent by picking out the couple’s first dance to Ed Sheeran’s “Thinking Out Loud.”

Food was also at the top of their priority list, but Kathleen, like most brides, says she didn’t get to eat much that day. They had a fusion of comfort foods and ethnic hors d’oeuvres like hibachi skewers, a biscuit station and shrimp and grits.

The details were perfection, but the highlight for Kathleen was simple. “I just loved seeing Brent standing there at the end of the aisle,” she says. “It’s so stressful leading up to it and that made it all worth it.”

To lessen the stress, Kathleen advises brides to stand their ground on the things important to them. “People always have so many opinions and their own advice, but remember that it’s a day for you and your husband,” she says.

Today, Kathleen, an office manager at C.L. Benton & Sons Inc., and her husband, a sales representative at Cintas, live in Myrtle Beach. 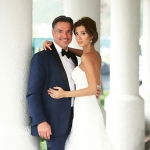 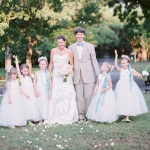 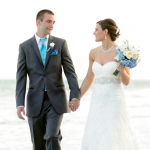