A firsthand account of the good, the bad and the ugly 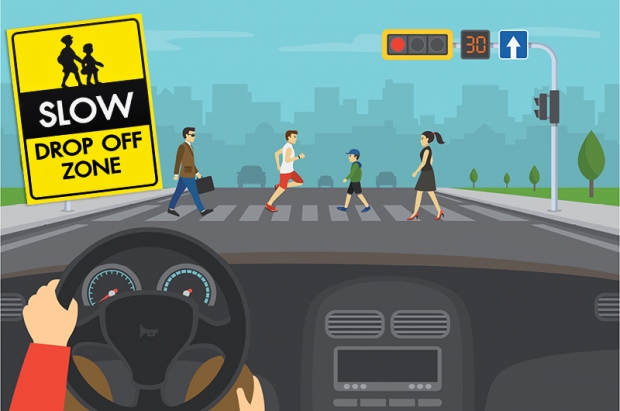 There are a few things required to be in the car with me each morning before 7 a.m. en route to my sons’ school drop-off lanes: a travel mug of strong coffee, a protein bar and a positive attitude. It’s not an either/or situation. I must be armed with all three, while seated in the driver’s seat in comfortable pajamas and a baseball hat, to combat what lies ahead.

Over the past seven years, I’ve learned a thing or two (not that that’s necessarily helped) about navigating the species of fellow parents in the daily school drop-off line.

We’re all going to the same place—the school in which we want our children to safely arrive for the day—but some Mom and Dad drivers want to bully their way through and think it’s a drag race to the finish line. I call this species The Aggressor. The kind that tailgates inches from my bumper all the way from the main road into the car lane that snakes around in front of the school, and then continues after my child has been dropped off on the sidewalk, sometimes tailgating so close that I can’t even see their headlights. There’s also a section of road before we reach the school that divides into two lanes, where said driver will race me beyond the 25 mph speed limit to the stop sign 200 yards ahead. You win.

There are even instances when The Aggressor will exhibit exemplary behavior for their kids buckled up in the backseat, like a middle finger raised in the air or expletives I can see being spat out from my rearview mirror. Nothing like a lesson in behavioral management, kids, even before the first school bell rings.

The Coddler falls to the opposite end of the spectrum from The Aggressor. This category actually tests the limits of my patience to where I could risk becoming an Aggressor as well. The Coddler is oblivious to time or the lineup of cars waiting behind her or him, and turns around in the backseat to have a conversation and give a kiss goodbye before their child actually opens the car door to exit the vehicle. Meanwhile, my son has already turned to wave to me from the front door of the school.

These overprotective parents are also known to test other parents’ patience by ignoring the universal school drop-off code of pulling all the way to the front of the line. Instead, they’ll stop midway, right in front of the school door, to make it easier for poor Junior to walk less (even though cars ahead and behind her have followed protocol and already dropped their kids off). Or The Coddlers will only stop where a teacher happens to stand by, like a valet, ready to open the car door for their child. Jesus, take the wheel.

This dual final category is the one I really struggle with: First, The Cheater, who cuts in line in front of me in the turn lane of the main road because I left a car’s length in front of me before I had the chance to pull forward. Yes, here you go, Cheater! I saved this spot for you because I don’t mind sitting through another red light to turn left onto Scipio Lane and I realized your time is more precious than mine. It makes me wonder how that conversation in that car went: “See, honey, this is how you get ahead in life—just butt in line when they’re not looking and the stupid people following the rules won’t know the difference. I call it taking initiative.” The child then asks, “But what about all the people that were already waiting in line before us?” Silence.

And, lastly, the Traffic Violator, a species who has just started to rear its ugly head within the last year, will cheat the system by skipping the left turn lane and going through the green light, only to then veer into the median up the road and make a U-turn to make a right turn onto Scipio Lane. Again, the lessons they’re teaching their children will be valuable to them when they’re in driver’s ed.

I know it could be worse … Most of these examples and categories of parent drivers don’t lead to arrests or accidents. But they could. Which is why I wanted to point it all out, so we can all take a moment to reflect and look at ourselves differently in the rearview mirror.