The Nature of Things

When weighing all of their options, it was an element of nature that made the purchasing decision for these discerning homeowners. Peek inside their houses, which will be featured stops on the Franklin G. Burroughs-Simeon B. Chapin Art Museum Tour of Homes. 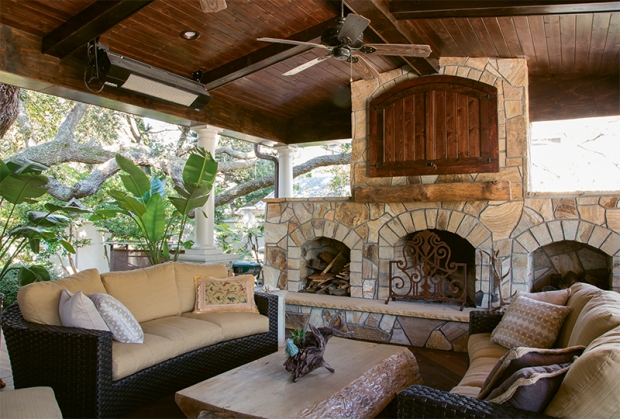 Heaven is Real: The outdoor living spaces at the Chartier home evoke a heavenly feel--understated by design, but magical in presence.

We always knew that we wanted to end up with a place at the beach,” says Joan Chartier. “And we wanted to live where the old houses were ... but in the end, what sold us on this property was the stunning oak tree in the backyard.”

In fact, the whole property is graced with a sprawling tangle of oak tree limbs that seem to hug its resident 4,500-square-foot home and “outdoor rooms.”

The couple took out most of the headers, built into the house in 1950, to open up the interior layout, as well as adding about 1,000 square feet of living space. But they were discerning enough to celebrate its lineage by preserving original features like built-in corner cabinets, an old-timey telephone niche, wood wall paneling and crystal doorknobs.

And with all the updates and modern creature comforts, the Chartiers employed careful planning to incorporate geothermal heating and cooling, a boulevard-side pool, and appliances retrofitted into an odd hallway off the kitchen, which now gives the space a sense of purpose.

Be sure to check out the gorgeous hickory and Brazilian cherry floor in the master bedroom, the Sadlemire iron sculpture that reigns between the living room and converted porch and the Gerhard Heintzman wood-carved piano dating back to the 1800s.

With a family home in Asheboro, North Carolina, a residence in Park City, Utah, and careers in sports marketing that have moved them from Chapel Hill to Atlanta to New Jersey and even to Portland, Oregon, I’d say it’s quite the endorsement that the Chartiers chose to get as rooted as those oak trees on the Grand Strand’s “Golden Mile.” 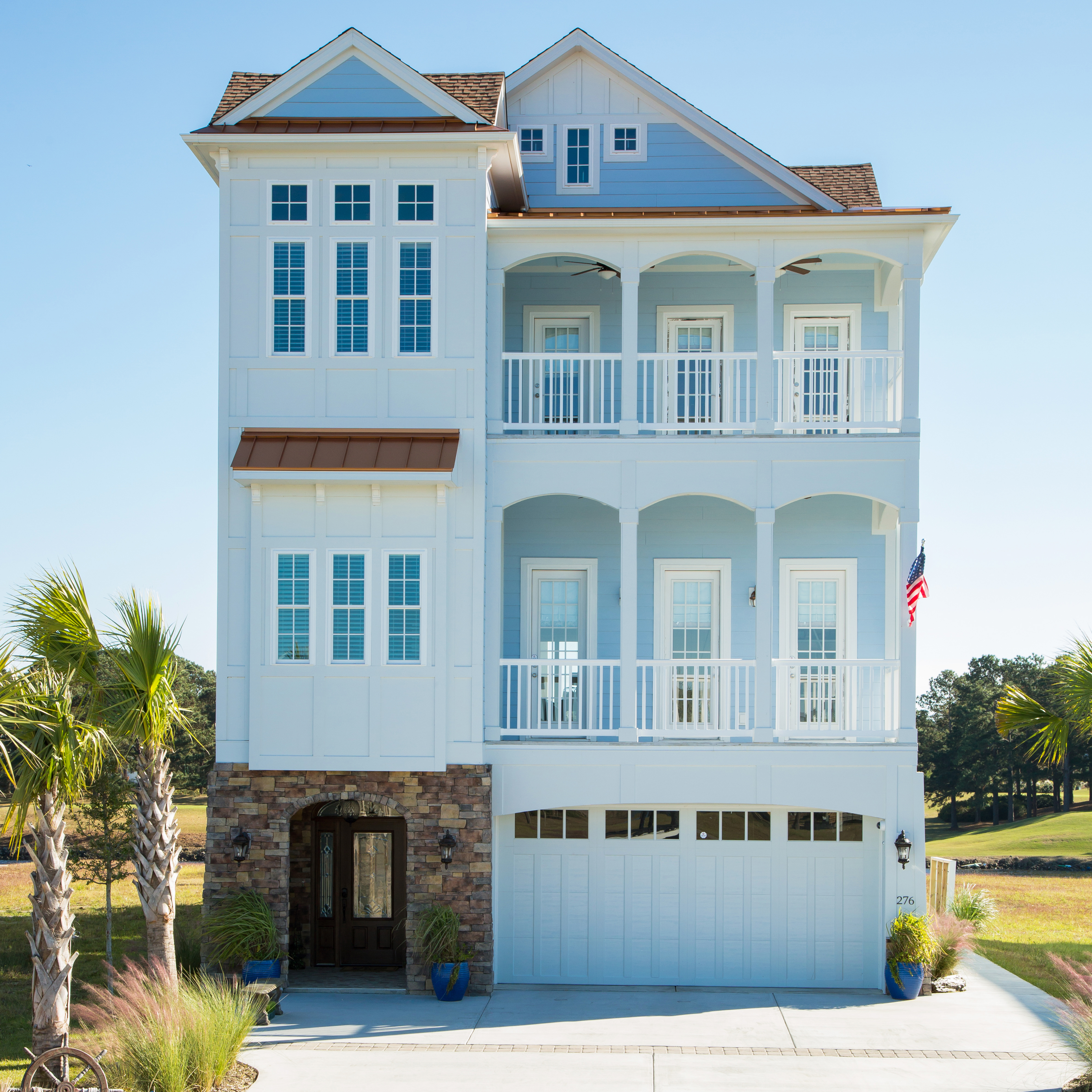 his is the “Zen-sational” stop on the home tour.

I kid you not. Ronnie (a former Jersey City fire captain) is a certified Kundalini Yoga and Meditation teacher, Reiki Master and Sacred Sound Healer. And every square foot of this soaring waterway home resonates with peace, healing and spiritual harmony.

The “yoga room” on the ground floor hosts a collection of high-vibration gongs, singing bowls and tingsha bells. Vaulted ceilings and the use of sacred geometry heightens consciousness. A trio of star-reaching windows in the master bedroom allow the moon to beam in at night. And even the his-and-hers closet room incorporates alcoves for keepsakes and memorabilia to attract positive vibrations.

On a more mortal note, behold the kitchen beverage center with its own Keurig filler faucet and built-in utility fridge for creamers. And take in the array of custom woodwork, from cabinetry to coffered ceiling treatments and wood cladding on the fireplace.

Ronnie nods to Moira as “the decorator,” and the home is filled with mahogany pieces by Steve Shell and an elevator that pays tribute to her mom’s favorite song, “La Vie En Rose.”

So what was it about this location that spoke to their inner voices? “You see that brook and little waterfall across the waterway at Myrtlewood Golf Club?” asks Ronnie. “That signifies sacred ground and we get to see that everyday.” 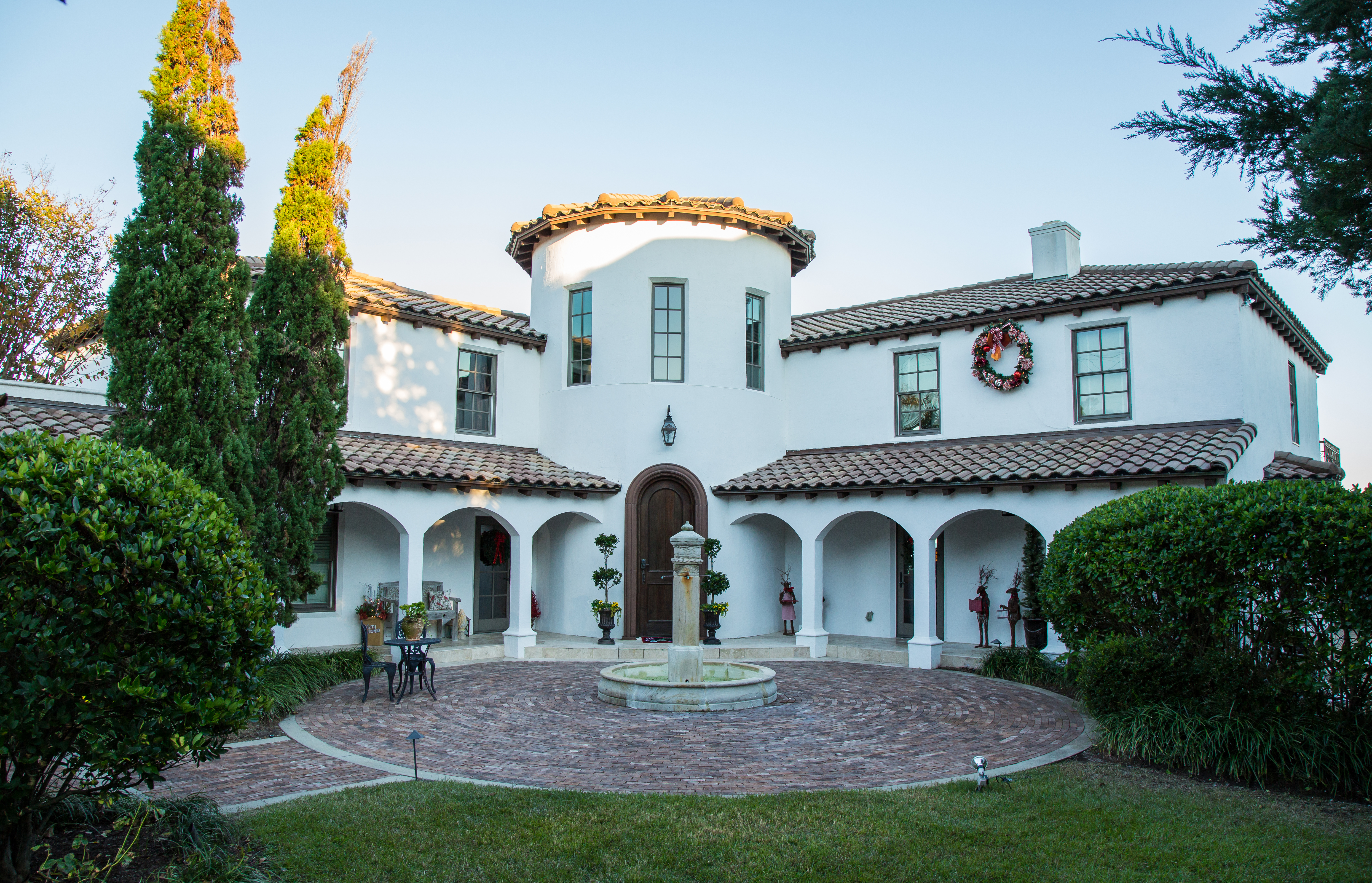 “The moon sold Carey on this house,” beams Barbara.

What was to be a bulldoze-and-flip oceanfront project twelve years ago became the Grahams’ dreamy Spanish Revival-style home after a full moon over the Atlantic convinced Carey to keep the property all to themselves.

“When we started to knock down the old 1940s beach house ... it was built like a fortress with steel beams and solid oak floors,” Barbara recalls. “And I told Carey, ‘When I get going on this house, you’re not going to want to sell it.’”

Barbara learned that the original stronghold of the structure was built by the R.J. Reynolds family and, day by day, the couple fell deeper under its 4,200-square-foot spell of yawning archways, rounded rooms, niches and a serpentine stairway.

Not to mention that at 100 feet wide, it’s one of the rarest oceanfront lots in Myrtle Beach.

“Malibu meets Palm Beach” was Barbara’s initial design vision for the house when it made its debut on this home tour back in 2007.

But since then, the home has morphed into what Barbara calls “Old World Mediterranean,” trading black-and-white for earthy tones and the grounding elements of Jerusalem limestone flooring, warm-tone brick and even a set of doors reclaimed from a naval ship.

There’s a lot to take in on this stop on the tour, but do treat yourself to a good look at the artisanal soapstone vessel sink in the half-bath, the lounge-and-bar room and some of the best ocean views ever! 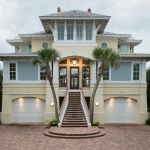 The stops on this year’s Tour Of Homes will show you how dreams can become realities and intentions from the heart really can come true! 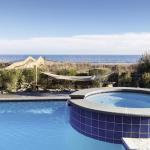