August 2014
Written By:
Ashley Daniels
Photographs by:
Robyn Pigott
This makeover was made to gather family together at the beach 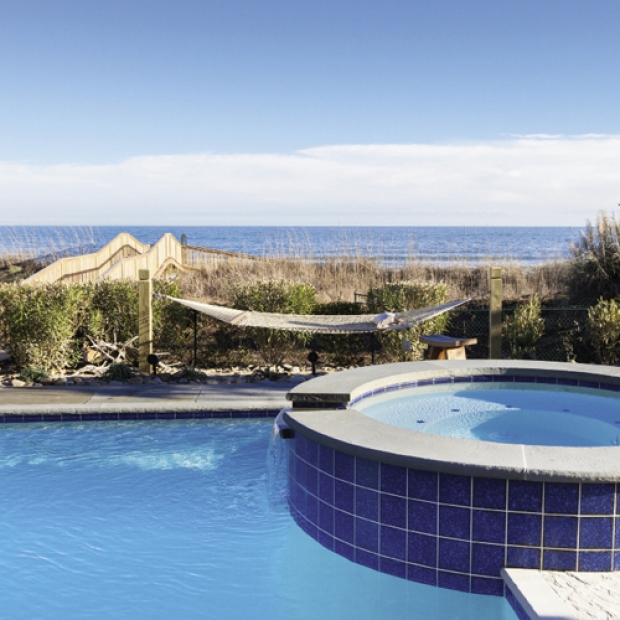 Build it and they will come.

This is what the Nardslicos were hoping for when they reincarnated a neglected 1970s beach house into a haven of perfect health that breathes modern and natural beauty.  The goal in the endeavor was that their extended family from all corners of the country would come and gather together.

And it’s working. Terri tells me a few relatives are arriving later this afternoon while she takes me on a guided tour of the remodel, starting with the first floor game room that greets the front foyer.

It’s a room that begs for company and laughter, with bright swivel armchairs and pillows that line happy window seats, a tangerine pool table and a flat screen. “My grandson and his friends were just playing video games down here,” she says.

Sand-swept travertine tile floors lay underfoot and whitewashed wood planks stretch across the ceiling. “Our house was built to age gracefully,” says Terri.
But the graceful design had to first be born from the shell of an ugly duckling blockhouse along Beach Drive in Myrtle Beach. Terri and husband Al purchased the property in June 2011 after a condo owner they rented from over vacation didn’t appreciate their puppy, Nardo.

“My husband was like, let’s find a house to buy,” says Terri. “So we found this property listing and stayed in it for a year so we could have a beach house for the family.”

But a fresh coat of paint didn’t do much to increase the home’s eye appeal, so the couple decided to do an intensive remodel. “We didn’t want to tear it down,” says Terri. “We really just used the same footprint within the same square footage.”

The Nardslicos did, however, raise the roofline to 18 feet to dramatically extend the second floor ceiling height toward the Carolina sky. Remodeling, it turns out, is something the couple has dabbled in since they were newlyweds. “We remodeled several houses for us, personally, then did some for family members and realized we had a knack for it,” says Terri.

Terri, a retired respiratory therapist originally from eastern Tennessee, and her husband from upstate New York who owns a software engineering company, teamed up with CRG Construction, based in Garden City Beach, for this project, which was completed in March 2014. The couple also has a remodeled home in the mountains outside of Charlottesville, Virginia.

“Remodeling is definitely a test on trusting relationships—both personally and professionally,” says Terri. “I love doing it, but I wouldn’t recommend it for everyone. You’re either all in or all out because you have to see it to the end.”

And for this remodel, see it to the end of every square inch they did. Smart custom cabinetry—both naturally worn and modern—line the walls and stand under the beds in each of the five bedrooms. Features include deep drawers, embedded doors for flat-screens, and even a Murphy bed that folds out to reveal a hand-painted beach mural.

It’s a good thing storage is found here, as the former closets were ripped out and replaced with shower rooms. Bathrooms are so passé. These open baths are tiled from wall to floor, where the water drains in the center. Terri’s even has a porcelain claw-foot tub paired alongside the showerhead that drips from a heavenly ceiling mural of blue sky and puffy, white clouds. “It’s one of my favorite features of the house,” she says.

That, and the wall of retractable glass doors on the second floor that open onto the partially enclosed deck, the backyard pool flanked by hammocks and, of course, the Atlantic that’s just a short walk across the sand. It’s a breathtaking bird’s eye view that’s heightened by the smell of the salt air. Copper misters line the ceiling trim of the deck to cool guests during the dog days of summer (“about 20 degrees cooler to be exact,” says Terri) and to ward off mosquitoes.

Her husband’s Italian family loves to cook, so his must for the remodel was an updated kitchen with some Old World charm. Terri also reveals the home’s first floor kitchen that doubles as a laundry room. The checkerboard-cut butcher block showpiece is perfect for the fillets they throw on the grill, located right outside in the outdoor kitchen. A beautiful blue stone countertop wraps around the grill, fridge, burners and a sink that supplies cooled, filtered water.

The remodel is a remarkable marriage of modern and coastal classic, such as the Savant system entertainment controls and an elevator, balanced with an interior palette of ivory and blue, as well as thick beams reclaimed from a firehouse in Lumberton. An octopus, sculpted by metal artist Robert Sadlemire, wraps its long, metallic tentacles around the staircase. A sinewy dining room table carved from an olive tree that was struck by lightning proudly sits upstairs outside the kitchen. Features aren’t fast and manufactured, but well thought out, caressed and built on a story to be retold for generations.

“My husband always loved vacationing in Myrtle Beach,” says Terri. She and her husband are now living here full-time with their grandson while he finishes high school.

“I love it because it’s such a laidback place to live, with a beach state of mind,” she adds. “Most people only see the boardwalk or that it’s ‘not Charleston,’ but there’s so much more than that.”

Something tells me the extended Nardslico family will be coming to stay at this home of dreams on the beach for many years to come.