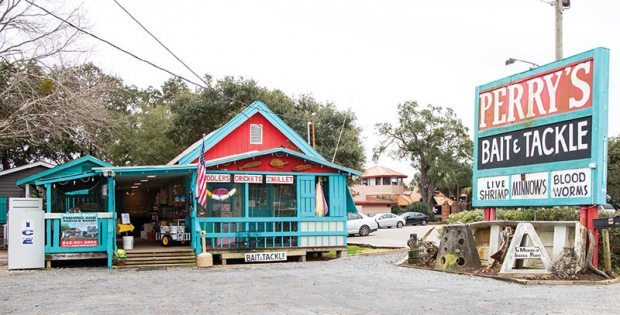 It’s a bitter-cold, wind-blown afternoon in January, but you still feel Jessica Perry’s kind, gentle soul shining down over the live oaks hugging Perry’s Bait & Tackle Shop. Warming hearts near this place on Earth she loved so much.

Since 1954, the robin egg blue bait shop has been a landmark on the north end of the Murrells Inlet MarshWalk. And, up until September 29, 2017, so was Jessica Perry, who sat behind the counter as its owner. On that day, Jessica was murdered by her ex-husband and left behind their three children.

Liam, 14, Aden, 11, and Bella, 10, are giving me a tour of the shop, past the bait tanks of mud minnows, finger mullets and more on the covered front porch, and inside the tiny building overflowing, wall-to-wall, with anything you can think of that has to do with fishing—a fisherman’s paradise, and one that’s weathered many hurricane seasons along the inlet. Sharon Doehner, Jessica’s mother, points up to the heavy beam rafters above, part of the original building.

Before Jessica ran the store, Winston Perry, her father-in-law, had a long run in ownership of Perry’s; he passed away in 2010. And today, the next generation, Jessica’s children, are owners of Perry’s, which was put into a conservatorship for them after Jessica died—just as she had wanted. As fourth generation owners, the three Perry kids are the youngest bait shop owners in South Carolina. They practically grew up in the shop, with a playpen set up behind the counter while Jessica juggled work and motherhood. Now a teen in school, Liam will sometimes help out at the shop on a part-time basis.

Jessica’s love for fishing and the water was definitely passed down to her children. The boys have even won some local fishing tournaments.

“I just like being in the ocean, in the water,” says Liam. “I mean, we were swimming when we were like two … I have a picture of me as a baby.”

Jessica originally planned to be a pharmacist, after earning a double degree in biology and chemistry from East Carolina University. But she wanted to be outside … and around people.

Once she began standing at the helm of the bait shop, she quickly became known far and wide for her finesse in tying rigs, as taught by Winston, and her innate knowledge of fishing and where to go to catch what—no matter your skill level or your path in life.

“One of the neat things about Jessica is it’s been over three years now, but we still have a lot of people coming to the shop that ask about her and have stories to tell,” says Craig Doehner, Jessica’s father. “She kind of had a way of making everybody feel like they were best friends, which is wonderful.”

“The shop was really her fourth child,” adds Sharon. “She loved being over here and she loved doing what she did and she just loved meeting people. This is one of the reasons we renovated this. It was one of her visions to have this transformed into a place where generations could come and visit the inlet.” 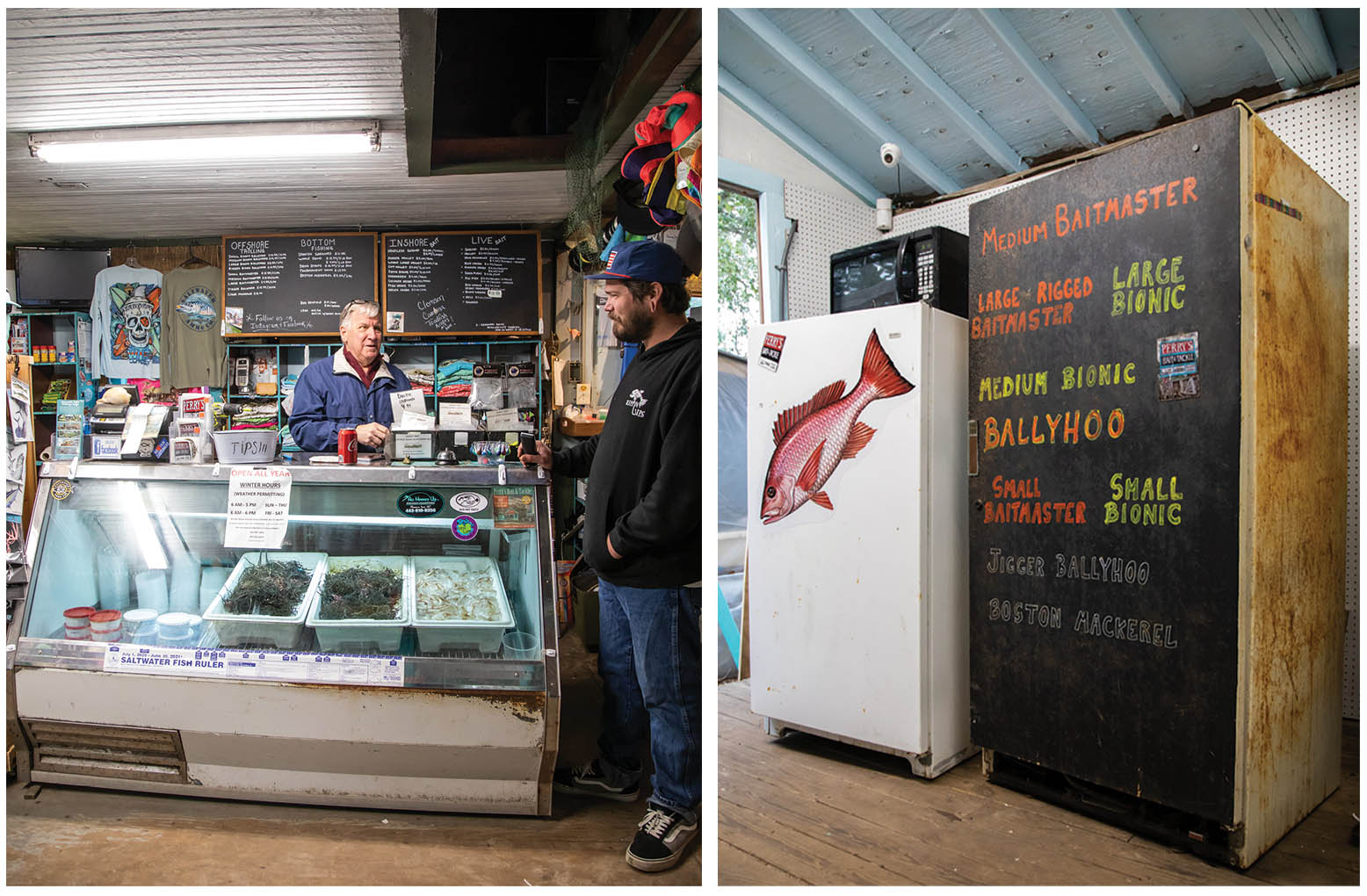 A BIT OF BAIT: Craig, Jessica’s father, and Jordan, a Perry’s employee, talk shop, surrounded by tanks and fridges of live and chilled bait—some of the most live bait carried in a shop in the area.

The “this” Sharon is referring to is the family’s latest business venture: the renovation and grand opening of the Murrells Inlet Fishing Lodge, a lovely waterfront cottage nestled under a canopy of live oaks and adjacent to the bait shop that became available as a vacation rental as of October 2020. The four-bedroom, three full-bath fishing lodge is a hidden gem, complete with wide-planked flooring, cheerful aquamarine walls, a modern kitchen wrapped in fish scale tile, and shabby chic coastal decor. A beautiful wall mural painted by local artist Asher Robinson in tribute to Jessica’s legacy borders one of the bedroom door frames. The Perry kids each tell me excitedly that they claim a favorite bedroom when they stay there.

Outside, the back porch sports rocking chairs to overlook the bait shop’s docks and views of the inlet. There’s also a large picnic table (perfect for an oyster roast) and bench sitting area under one of the historic live oaks.

The fishing lodge is just one of the additions and expansions in the works on the bait shop property to secure the Perry children’s future. The family is also expanding the roofline at the back of the bait shop, where more bait tanks are now covered by tarped tents. The bait in stock at Perry’s is what makes them a mainstay on the marsh, with 90 percent of the bait caught fresh locally and then stored in tanks equipped with salt pipes from the creek.

“A lot of places call themselves bait and tackle shops, with a sign out front that says they have a lot of bait, but we try to have at least six or seven different baits in the summertime—a much broader selection,” says Craig.

In addition to live and frozen bait, the shop offers an endless supply of rigs, rods, gear and tackle, plus connections to local charters and fishing equipment repairmen. There’s also a collection of “treasures” pulled from local waters displayed in the rafters that fishermen give to the bait shop—from an assortment of old glass bottles to a prosthetic leg.

Perry’s also hosts an ongoing schedule of events and fundraisers (tentative during the pandemic), such as fishing seminars and knife-sharpening classes. Since 2017, Perry’s Annual Benefit has been held on the Saturday nearest November 13 (Jessica’s birthday) on the grounds: the first year raised funds to establish an education fund for Jessica’s children, the second year was focused on benefiting the Family Justice Center of Georgetown and continuing the Jessica Perry Memorial Reef project in Pawleys Island, and the third year marked another reef installation and a donation to the Lost at Sea Memorial in Murrells Inlet. The lodge will also be the destination for its first wedding this summer. 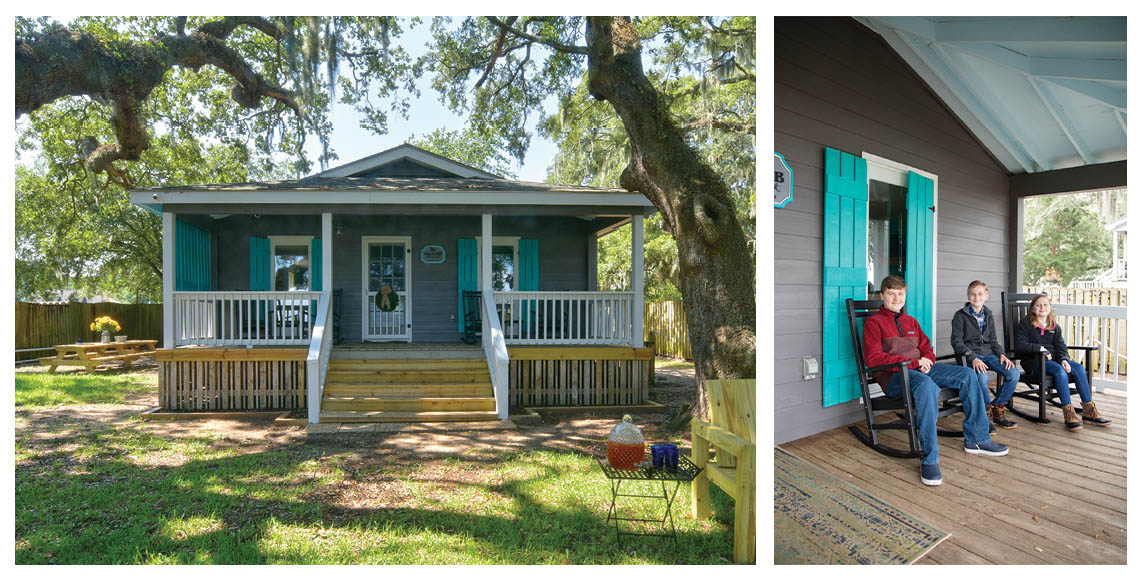 FUTURE VIEWS: The Perry siblings relax on the lodge’s back porch that overlooks breathtaking views of the inlet.

“I hope the children will continue keeping the bait shop, although I want them to feel free to navigate and choose whatever career field they want to go into,” says Sharon. “But I hope that they’re able to find good managers that will continue running it and just keep the Perry legacy alive. I hope they’ll be bringing their children and grandchildren here … if only we all had a crystal ball.”

Liam, who is wearing a NASA sweatshirt today, wants to become an aerospace engineer and likes to invent, read and create prototypes for all kinds of machines.

“After I retire, I’m going to buy every business on the MarshWalk—all of it,” he says.

Off the water, Aden is obsessed with soccer and basketball and is also interested in engineering. Bella loves to sing and dance, and she wants to get involved in volleyball, but it’s been a challenge during the pandemic.

As guardians of Liam, Aden and Bella, Sharon and Craig are devoted to raising their second family, of sorts, in addition to the couple’s adult children, Jessica’s siblings, and grandchildren.

In that same speech, she says, “Some months later [after Jessica’s death], we discovered that the state of South Carolina has been in the top 10 annually for the last 20 years for domestic abuse. … Jessica was passionate about coastal wildlife preservation and loved anything that lived and swam in the ocean. She was a gifted artist, entrepreneur and business owner, too. As a child, she astonished us by her precocious mind, her ability to remember obscure details, and once told us she couldn’t remember not ever being able to read. Her beautiful, contagious smile brought so much joy to her family and her many, many friends. …”

For more information on the bait shop and upcoming events, visit perrysbaitshop.com. To book a stay or event at the Murrells Inlet Fishing Lodge, visit murrellsinletfishinglodge.com. 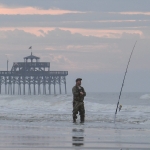 Wishin you were Fishin

Along with our chunk of the Atlantic Ocean, our countless tidal creeks, our rivers and estuaries, comes an amazing variety of seafood waiting to by plied from the water and prepared for your consumption. Don’t have a boat or a fishing pole? Don’t know how to fish at all? No worries! Dozens of fishing charters, large and small, including headboats and private charters, can get you on the water without any need of prior experience or a fishing license. 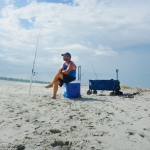 Finding fish, fun and happiness at the jetties 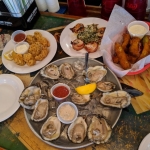 The Freshest Seafood on the Grand Strand