August 2015
Written By:
Leigh Cook
Finding fish, fun and happiness at the jetties 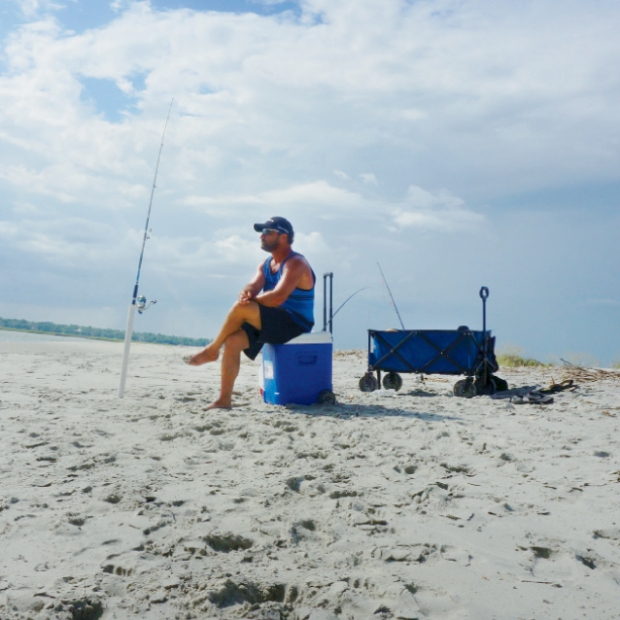 A couple of days ago Kip said the words guaranteed to get my heart beating faster: “Let’s go fishing at the jetties.”

He probably regretted the words as soon as he said them, but he’d seen the fire in my eyes and knew there was no going back. We’d only been to the jetties twice, but both times I’d struck aquatic gold and had been dying to return since.

By the way, I’m Leigh. I’m an amateur fisherman. Or woman, whichever you prefer. It’s all semantics anyway. Kip is my boyfriend. And “the jetties” is what I consider one of the sweetest, wildest spots on the Horry County coastline, whether for fishing or just for pure beauty.

So why would Kip regret suggesting going there if it’s so darn special? Because you don’t just pull up into a public parking area, stroll out onto the beach and flop down. It’s a good mile’s walk from your parking spot, first down a stretch of road, then down the beach. And if you’re packing-impaired like we are, you’re hauling fishing gear out the wazoo and about to keel over by the time you get there. This thing’s a serious investment of time and energy.

And I love it.

Let me tell you how to get there. Drive up or down Highway 17 Business, depending on which direction you’re coming from, until you get to the Garden City Connector. Take this road in the direction of the ocean. When it ends at a road that travels north and south along the ocean itself, take that road south almost as far as you can. This road ends in a gated community you’re not going to be invited into unless you’ve got connections. Right before you get there, you’ll see a little turn off to your right. Here sits a gravel parking lot, free of charge, available to all beachgoers of an adventurous sort. There is even a convenient port-a-john to the far left (though the handle is a tad too loose for my liking).

Here’s where your journey begins. On the day Kip and I went, there were no clouds in the sky. Just the sun, and it was taking no prisoners. I was carrying two fishing poles in one hand and a cooler full of ice and water bottles in the other; Kip was pulling a rolling cart stacked with a tackle bag, another cooler for the (potential) fish and beach chairs, all neatly locked together with bungee cords. Professionals, we are.

By the time we’d walked halfway there I’d switched poles and cooler 20 times. I had sweat rolling down my back and in my eyes, my sunglasses were slipping down my nose and my shoulders were threatening to pull loose from their sockets. Kip had it pretty easy initially. I mean, come on. Hard-packed sand and a set of wheels? However, the smugness came to an abrupt end when said sand became so soft even walking was a chore. You know, the sort of sand that makes your calves and hamstrings ache until you want to cry. Or curse some blameless soul for everything they’re worth. Or both.

But on the other side of the semi-quicksand, salvation was within sight. Just up ahead, the beach curves inward on itself. Two rocky outcroppings, stretching out into the ocean like partially submerged dragons, funnel salty water into an inlet that runs back up into Garden City.

We hurried ahead, bolstered by the type of energy you get when you see water after two days of walking in the desert. And, for all our hard work, we’d made it: paradise.

Frolicking water surrounds you on all sides, from the ocean on your left to the huge horseshoe pool in front of you to the languorous inlet on your right. It’s not like typical Myrtle Beach, which around this time of year is teeming with bodies and smells of tanning oil. There’s hardly anyone out here, and those who are typically are surging far out in the water on boats and jet skis, content to keep plenty of space between you and them. So it’s you, the sand, the water, the wind, the sea grass and, of course, the fish.

Getting there, I’d been sweating and trying not to think about aching muscles. Once there, I was running back and forth like my feet couldn’t touch the ground. I knew I was going to catch fish, had no doubt about it, and I wanted nothing more than to pick the spot where my line felt right, my feet felt right and my mind clicked into place. I call this “having a feeling.” A friend of ours says I’m the Fish Whisperer. Kip just says I’m nuts.

We’d brought minnows and shrimp for bait. As is my wont, I went straight for shrimp. We’d gotten these guys at a bait shop, but I’ll make a confession. We’ve baited with shrimp bought straight from the freezer at the grocery store before. I tend to avert my face in shame when we do this, but we have actually caught fish with those shrimp. Just saying.

I cast as far out as I could, but I didn’t get any action until I brought my line in closer to shore. Then came the quick, sharp nibble I’ve come to recognize: pinfish. If you were to categorize fish as diners, pinfish would be fast food eaters. They are in and out, and they don’t linger. You don’t wait for pinfish to take the hook. You wait and you’re giving them a free meal, no tip for the waitress. As soon as you feel them, go for it.

That was the theme for the day. We bagged pinfish after pinfish. Sometimes I hauled them up two at a time, flipping and wriggling on my hooks. Kip even caught a flounder, something I have yet to do myself. We got sandy and salty. I tried to be the good girl by spraying sunblock all over but wound up burning in weird patches all down my right side anyway. It was fantastic.

Even when the sun was westering, we didn’t want to leave. We packed up our load, considerably heavier now with our catch of the day and the water we’d taken on to keep them alive, and slowly headed back to the car. Yes, it was terribly tiring. Our backs ached, our arms ached, our heads ached. I was sunburnt, thirsty and in dire need of ChapStick. But oh, what bliss to finally drop into our car, crank on the air conditioning like it was just invented and drive home.