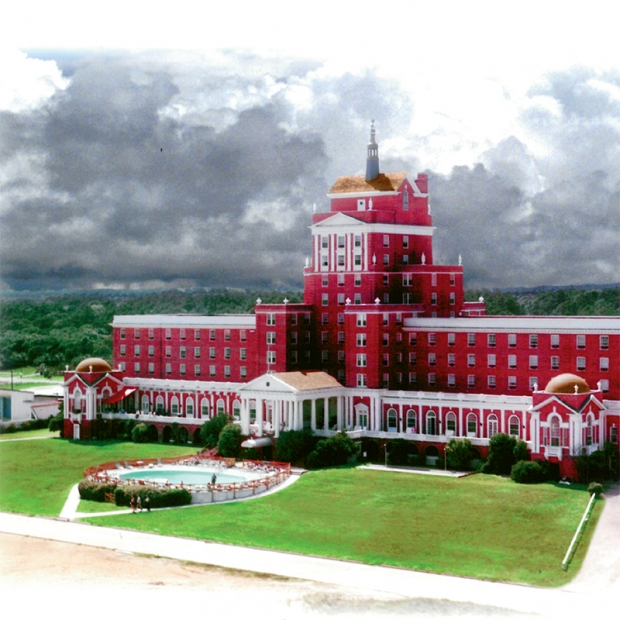 People called it the million dollar hotel, the castle on the ocean and the wedding cake hotel.

Most us locals just called it … the hotel.

Why care about one more long-gone hotel? We grew-up-heres care because it was our splendiferous white castle on the north end of our town. It was our tallest, our most imposing, our most impressive structure. And for almost 50 years, it loomed large in our lives and our history on a 30-foot-above-sea-level plateau.

Oh, but it was much more than just a hotel. It was a spectacular architectural remnant of a noble and daring attempt to “Create the most desirable haven of rest and recreation in the world … the most complete playground ever contemplated.”

Those highfalutin words were the voice of the visionary developers describing their grandiose venture. They called it Arcady, named after a place in ancient Greece where men found peace and solitude in their natural environment. The natural place they chose for this dream was that ribbon of sand we would know as Myrtle Beach. Greenville’s John T. Woodside, his three brothers and architect Raymond Hood were the originators of that spectacle-ish vision.

Land was acquired in 1925, 66,000 breathtaking acres hugging the Atlantic, with the hotel and golf course finished in 1928. These were to be the leading actors in the ocean swept production. The founders of this grandiose dream went all in with their lives, money and reputations. The ’29 crash would lop the economic legs off their attempt at creating a coastal paradise.

The Woodsides lost more than their shirts. They lost their six Greenville textile mills, including the largest textile mill under one roof in the entire world, an operation with 112,000 spindles. They lost their financing, their fortune, their 17-story Woodside National Bank, their magnificent hotel and their nowhere-else-on-earth dream. They lost the entire coast of Myrtle Beach, 14 miles of pristine shoreline garnished with 30-foot sea-oated sand dunes, twisted live oaks and wind-shaped myrtles and cedars.

Arcady was to be the most ambitious resort haven in the entire country. 90 years later nothing touches the scope and splendor of their concept.

Each white-tiled bathroom was equipped with hot, cold and saltwater tub spigots. In those days, saltwater baths were considered a luxurious panacea for rheumatiz, ague, scaly spots, wrinkles and whatever ailed you. The hotel even provided ice water piped into each room. Keep in mind … all this was in the 1920s.

Topping off this magnificent white wedding cake was a lighthouse spire used for coastal navigation. The tower was also the site of Myrtle Beach’s first radio station, as well as a reputed gambling venue. During the war, it was an armed 30-cal lookout for U-boats patrolling the Atlantic, as well as keeping watch on 700 captured Germans in the prison camp a few blocks north. Some of these POWs even stayed after the war and became local businessmen. 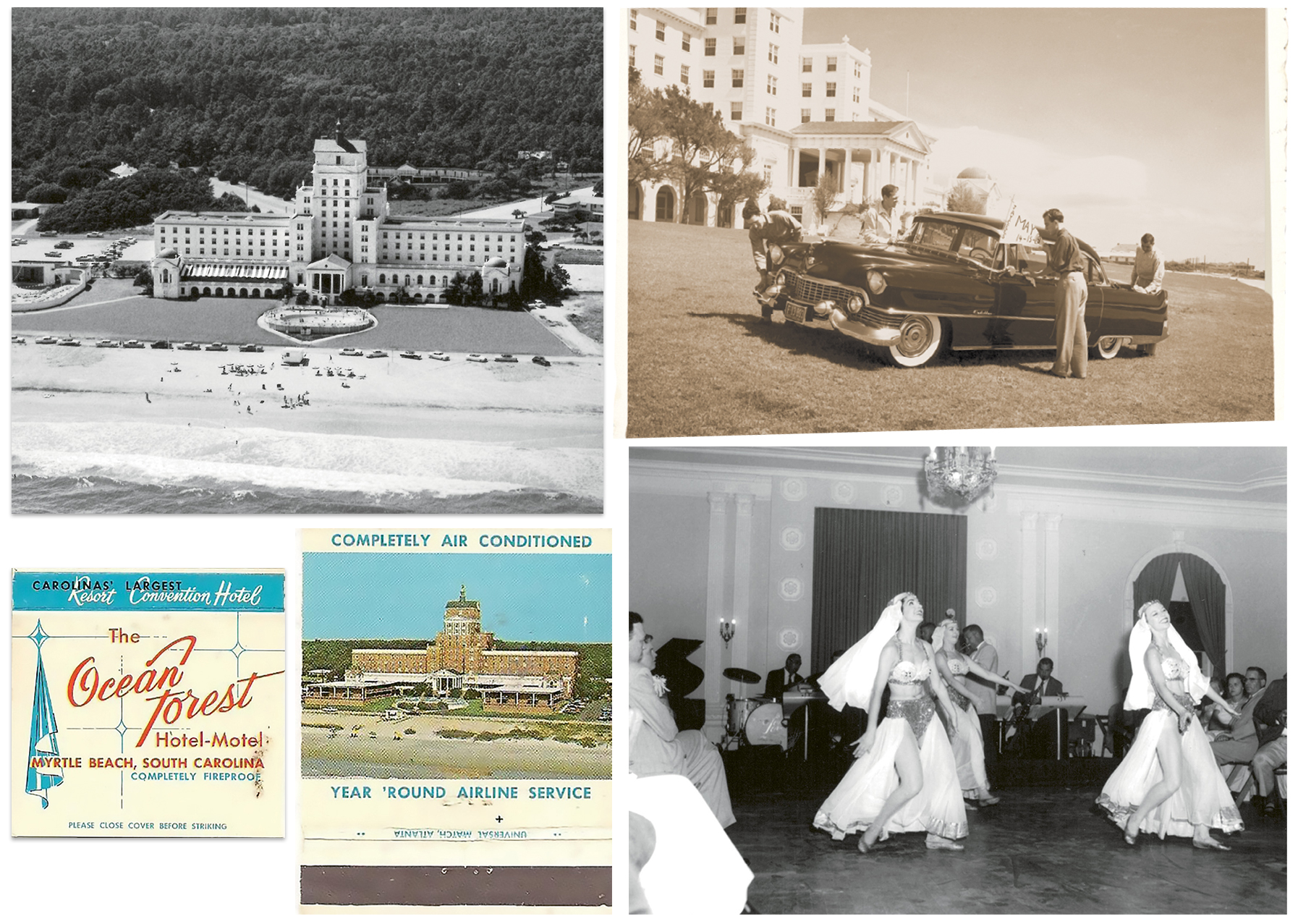 Guests and members could opt for use of the Robert White-designed 27-hole golf course and stay on premise in the 60-room Georgian clubhouse and inn. The golf layout designer would become the PGA’s first president. The all-male golf course would be frequented by actors, politicians and the legendary likes of Sarazen and Snead. A few cigar smokers and gimlet drinkers lounging ’round that same clubhouse fantasized the need for a magazine dedicated to sports and leisure. They named their publication Sports Illustrated.

Also overlooking the ocean, nestled beside the south side of the hotel, they built an acoustically correct, open-air amphitheater. Locals called it the Marine Patio. You could savor the dance music of all the famous big bands: Carmichael, Dorsey, Basie, Spike Jones, Herman, Harry James, with the silvery ocean as a romantic backdrop.

Those who couldn’t afford the ticket would blanket-sit on the amber moonlit sand dunes and ogle the comins and goins of snazzy dressed couples sippin illegal cocktails. When the band kicked in, beach-listeners would sand-boogie barefoot to the wailing sax or clarinet from a hip swing tune.

MIT grad Raymond Hood created the Chicago Tribune Tower, the Daily News building in New York, the McGraw-Hill building and the black-and-gold brick Radiator Building, one of America’s most impressive skyscrapers, which became Bryant Park Hotel. Hood was also senior architect for all 18 buildings in Rockefeller Center and the RCA Building. It’s whispered Ayn Rand’s Peter Keating of The Fountainhead was based on this same high-rise architect.

Every magnificent structure magically conjured up by Hood still exists as a treasured historical landmark except one—the Ocean Forest Hotel.

Near the golf course was an open-beam cypress horse stable which housed 40 rent-a-rides. Other play-toys offered were red-clay tennis courts, a skeet and trap range, archery, miles of hiking, duck and quail hunting (bird dogs provided), riding trails and, of course, 14 miles of sailing, sunning and fishing along a pristine oceanfront lined with sculpted oaks, myrtles and colorful cabanas. Six freshwater lakes paralleling the Atlantic were available for canoeing, bass fishing and moonlight trysts.

Amenities to come were a separate golf course for ladies, separate courses for the children, boys and girls camps, nurseries for infants, a beach and bath house, a wildlife sanctuary and a yacht basin carved out where the current Yachtsman Hotel sits today.

Nothing on our Grand Strand or any other strand was ever conceived so grand.

The Great Gatsby-ish après-theater cocktail galas, glistening with parfait gowns and pastel tuxedos, capped off the theater productions. Thought up and headed by flamboyant Jane Barry Haynes, this was the South’s only theater-in-the-round. Arena-type seating was intimate and immediate. “It was the most splendid theater in the South,” said Miss Haynes.

Mingling among the celebs and stars that graced the stage were powerful politicians and money movers who gambled in the tower, danced in the ballroom, sipped perfect Manhattans in the Brookgreen Room and prowled the verandas in linen, furs and silk.

Its local fabulosity has never been exceeded. Its historical significance remains unrivaled. It was our social universe and the biggest, baddest, most imposing structure for 200 miles. It was our Coliseum, our Taj Mahal, our Parthenon.

Ask any local yokel directions and the answer went something like…

“Be ‘bout a mile past the Ocean Forest.”

Twas a natty bow-tied bartender served me my first cocktail, a nutmeggy brandy Alexander, at age 6 in the chichi Brookgreen Room, while I listened to violin stroller Eduardo Roy, bedazzled in Easter-eggish neon jackets. It was there I first saw a bartender gently plop a pearl onion into a martini and anoint it a Gibson.

We were a Baptisty dry state back then, but the Ocean Forest was the closest thing we had to architectural royalty, so the local constabulary cut them serious slack.

The Bullpen was the quarters for the hotel staff. Locals called it that because it was a hexagon with one entrance off Poinsett Road. Stilted for underneath parking, the top story was all apartments with the caretaker office in the middle of the open area. As a teenager, we drove through late at night listenin’ for dance music and an open-door party of cocktail waitresses, musicians, bellhops and bartenders. Usually found one.

15,000 acres would be put aside for a gated community. No part of the project could ever be sold. The first 500 family memberships would be sold at a heady $1,250, which would give them, “… the privilege to build and occupy homes in a specially favorable and restricted section, if they so desire.”

Nearly 50 years after its construction, the Ocean Forest Hotel was imploded on Friday, September 13, 1974. In a 1974 article in The Sun News, then hotel sales manager Albert Oliphant said, “plagued by rising costs, the 10-story hotel will be torn down and rebuilt because it is unable to meet the requirements of its insurers.”

Nearly 50 years after its immaculate construction, on that sunny but tragic Friday the 13th, the last castle of the Woodside brothers’ dream was tumbled into twisted rubble by Hudgins and Company demolition. Fade to black. A perfect implosion … an imperfect ending.

We crouched behind the sand dunes and cried for our Castle on the Sea.

Even the head of the demolition company, Mr. Hudgins, admitted, “Simply a shame this hotel wasn’t renovated. It was the finest construction I’d ever investigated.”

Like emptyin the pockets of a dead man walkin, they auctioned off the woodwork, crystal and glitter, even the cups and saucers and room keys. They buried the broken bones of the once magnificent hotel in what was to be Cagney’s parking lot.

I never ride past without it looming large over my recollections.

All that’s left of what shoulda been our Breakers, our Greenbrier, our Fairmont, our Plaza Hotel … are just a few artifacts, some postcards, concrete roads, the Pine Lakes Golf Course and pangs of what mighta been, coulda been, shoulda been.

In my mind it’s still there. ‘Cause we want it to be.

A look at four prominent locations that were gone before their times
GENERAL TAGS:
myrtle beach / dining / Running / fishing