Local artist Linda Weatherspoon on injury, recovery and giving back 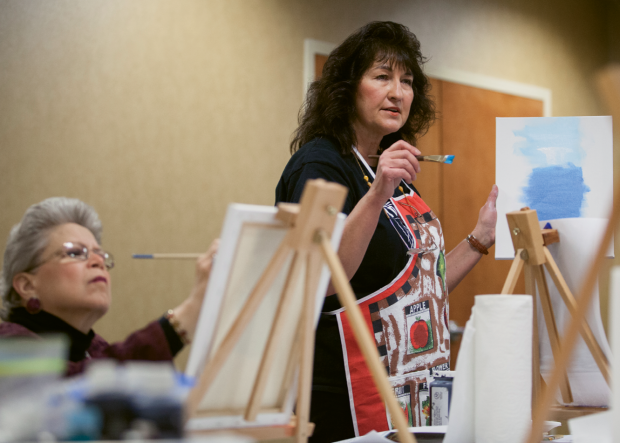 For guests entering ART Burger Sushi Bar in Myrtle Beach on any given Saturday afternoon, the woman seated in the lobby creating pastel drawings is just one more component of the hip scene. She’s working on a rendering of a pet portrait as patrons stroll through this oceanfront dining spot in pursuit of artisan edibles or fancy cocktails. One would never guess that this artist is Linda Weatherspoon, survivor of a ruptured aneurysm that nearly took her life, and that her work is devoted to helping others heal and prosper through artistic expression. This artist’s story is one of not only creativity and passion, but also grit, tenacity and hope.

In April 2007, 48-year-old Weatherspoon was six months into her first year as art teacher at North Myrtle Beach High School when she started experiencing severe headaches. She and her husband, Jeff, attributed the symptoms to her hectic schedule, which included juggling a long commute and raising three girls. However, when she began mumbling incoherently one afternoon, Jeff rushed her to the hospital; she was promptly airlifted to Charleston’s MUSC where she was diagnosed with a severe brain bleed. Weatherspoon remained in a coma for 18 days. Family and friends, including adult sons Larry and Nathan Bond, convened at the hospital and established a post there, never leaving her side for her 34-day hospitalization.

Weatherspoon’s painstaking recovery has been a cognitive, physical and emotional battle for her and her entire family. When she initially regained consciousness, she was unable to understand or communicate through language, a condition known as aphasia. She also had optic nerve damage and severely limited use of the right side of her body. Through some rehabilitation and therapy but mostly sheer will and hard work, Weatherspoon has achieved a recovery far beyond doctors’ predictions.

One of the first signs of Weatherspoon’s artistic memory occurred just weeks after she awoke from the coma. Larry had put a pen in her right hand to spark her interest in drawing, but her right side was too severely injured. Instead, when Larry and the nurse briefly left the room, she picked up the pen in her left hand and made a detailed sketch of the hospital room. “When they came back in the room, I couldn’t figure out why they were crying,” Weatherspoon says.

Weatherspoon has been her own best advocate in her struggle with aphasia, with Larry, Jeff, and Weatherspoon’s daughters Christina, Carmelita and Elena playing instrumental roles. When she returned home, Linda couldn’t recall simple words. “We worked on ‘nose’ for three weeks,” Larry recalls. “I would point to my nose and say ‘nose’ and repeat it over and over, and reach out and touch her nose. I would draw a picture; I would walk around the room pointing at my nose, until she finally got it. Then we worked on ‘ear.’”

Larry put labeled sticky notes on items all over the house and created a large binder with pictures and words to help Linda make connections. “I would look at that book for eight hours a day,” Weatherspoon says. “It was my work.” She still refers to that binder for words that escape her, and she also relies on the help of her younger girls, calling Carmelita and Elena “Brain 1” and “Brain 2.”

Art therapy has been another important component of Weatherspoon’s recovery. In 2010 she began working with a group of artists, many of whom she knew before her injury, who continue to meet once a week at the Flying Fish restaurant to paint, learn and critique one another’s work. “I think a lot of her progress has been a result of the local artists that she works with, and that’s part of what’s made her who she is now,” Larry explains. “She gets to spend time doing what she loves and communicating with other artists who are passionate about the same things.”

In the past three years, Weatherspoon has begun reaching out in multiple ways to those suffering from similar injuries and experiences. She holds monthly stroke support group meetings and conducts art therapy classes through Grand Strand Health. Much as it helped with her own recovery, Weatherspoon explains, creating art is a transcendent process for others: “It motivates them; it takes them away from the negativity of their situation.”

At ART Burger Sushi Bar, where Larry is the owner, Linda works 15–20 hours a week, painting and drawing in pastel and also reviewing, scheduling and displaying the work of local artists. The proceeds from sales of her work go toward purchasing supplies for her art therapy program. She and her family also published a book titled Can I Paint in Heaven? to document their experience and serve as a support tool for others.

While Weatherspoon would enjoy returning to the classroom, her aphasia-related injuries still prevent her from doing so. However, as Larry notes, “If she went back to teaching, she wouldn’t be able to help other people, other stroke victims. She would not be able to paint; she wouldn’t have time. And now, she can. She’s said it before: ‘You know, maybe I’m blessed.’” 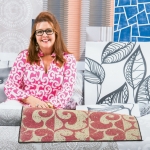