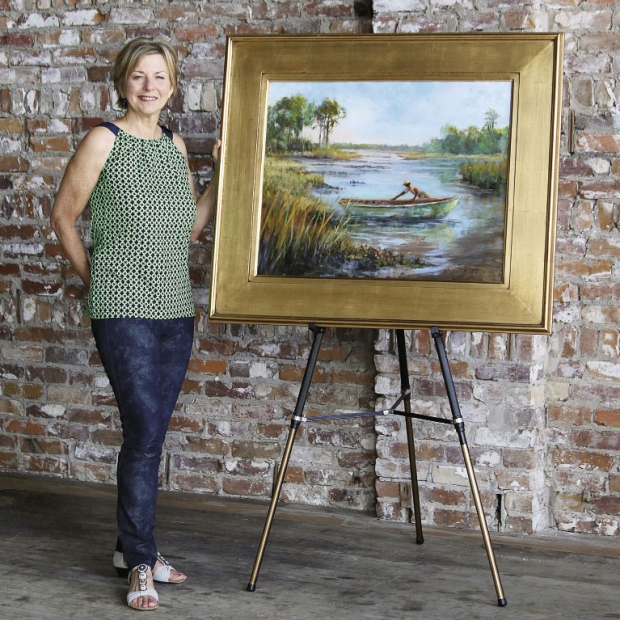 Six years ago, when it became evident that it was time to retire from a 23-year career in interior design, Pat Puckett threw herself headlong into fine art. Trading her days spent mostly indoors with a pencil, sketch pad and fabric swatches, Puckett did the only natural thing—move outdoors into the beauty of the Lowcountry with a brush, easel, oil paints and canvas. Though relatively new to fine art, Puckett is devoted full time to this new endeavor and has proven that her sharp eye for color and composition works as well outdoors on small canvases as it did in the interiors of her clients’ homes and businesses.

Skilled and schooled in the time-honored tradition of “en plein air” (painting in the open air with only the fleeting natural light), Puckett says “she found her passion.” Her work now hangs in galleries in Georgetown and Charleston and was introduced to thousands after she created an original work commemorating the 26th annual Georgetown Wooden Boat Show, taking place October 17 and 18.

Puckett is a longtime volunteer for the annual Pawleys Island Festival of Music & Art and is co-chairing the “Seaside Palette En Plein Air” event in Georgetown for the third year. The event challenges participants throughout the Historic District to paint in the “open air” tradition, later displaying and selling their works at the nearby Kaminsky House.

“I’m a lifelong native of the area and grew up in Conway,” she said, her smile evident even through the phone. Soft spoken, humble, quick to laugh and Southern through and through, Puckett lives with her husband, insurance executive Bill Puckett, in their home in the DeBordieu Colony. “Of course I visit Conway all the time. I still have family there.” Though a Conway native, in DeBordieu she’s reinvented herself.

“I’d always wanted to paint,” she said, “and in interior design you do some drawing, but that’s about it. I never had the time to paint. Once I retired, though, I found the time and now I paint every day; it’s like an addiction.”

Puckett clearly had some natural artistic ability, but she wasn’t about to leave her new hobby, and hopefully second career, to chance.

“I took lots of workshops,” she said, “and about three years ago I went to Italy to study en plein air painting for 10 days. The experience in Italy was fantastic. It taught me how to capture light and shadow. We toured and painted, and it was just wonderful. I also hope to re-visit France and do some workshops there as well.”

Painting in the impressionist’s style, Puckett recently visited the “stomping grounds,” as she called it, of Van Gogh, Monet and Cezanne and gathered new inspiration. “I’m also a fan of [American impressionist master] John Singer Sargent. Anytime I can get to a museum to see their work, I do. It’s a great way to learn.”

Her commissioned oil painting, entitled Lowcountry Oysterman, was no hastily-thrown-together work. Approached by the organizers of the Wooden Boat Show in January, Puckett created a one-of-kind original that tells a story.

“There were two influences for the work,” she said, “a book by Robert McAlister, Wooden Ships on Winyah Bay, and the other a book by the Harbor Historical Association and the Georgetown School of Arts and Sciences entitled Keeping Our Maritime Heritage Alive, Georgetown Wooden Boat Show: 25th Year Retrospective.” The stories of the early sailors, some visiting America for the first time via Winyah Bay, along with local oysterman, set the mood for her work.

A wooden boat, an oysterman slogging through the pluff mud, tall pines, marsh grasses and Oyster Bay in the North Inlet became the subject matter that would eventually inspire the finished work, which is on display at the South Carolina Maritime Museum on Front Street in Georgetown.

At home along the South Strand, Puckett says, “We love living in DeBordieu.” She further explains that the natural beauty surrounding them every day and their travels (local and abroad) are the inspiration for her works.

“I’m thrilled with the local exhibits and the honor of being chosen for the Boat Show’s poster and T-shirts. It’s all such a thrill. I could get used to all this celebrity!”

Puckett says she will dedicate 2016 to attending as many U.S. workshops of artists whom she admires and to paint en plein air as much as possible.

Puckett seems to sense that the human experience, which is ever-changing and fleeting, is much like the natural cycle of a day from dawn to dusk and the painting style she employs.

“The thing that makes en plein air painting so wonderful is that it changes how you see the world around you.”