On the Half Shell

Nowhere in nature does the phrase “beauty is in the eye of the beholder” apply more than with the saltwater oyster. From the outside, this mollusk looks like a piece of rock more appropriately found in your garden than on your dinner plate. On the inside the appearance only gets worse, unless of course you are a lover of this delectable bivalve. Author and satirist Jonathan Swift is quoted in 1710 as saying, “He was a bold man that first ate an oyster,” but history shows evidence of much earlier consumption.

In 95 BC, Roman aristocrat Sergius Orata is pegged as the first major merchant of oysters, designing a cultivation system to breed these mollusks. They remained a food staple for those living close to the shore and, due to their cheap price, were especially popular with the working class. By the early 20th century, oyster populations had declined drastically. A combination of high demand, overharvesting and environmental factors had put a crippling effect on bed numbers, which is amazing considering that 1 acre of marsh can produce 750,000 oysters. The jump in price changed what had started out as a working class food into an expensive delicacy.

Most of the oysters served here along the Grand Strand originate from the East Coast and Gulf region. The Chesapeake Bay still remains the number one producer on the East Coast, with Apalachicola, Florida, holding the title in the Gulf. South Carolina is no slouch, with more than 100,000 bushels being harvested from the Grand Strand region, according to the Department of Natural Resources. There are hundreds of different types of edible oysters with names such as Rappahannock River Stingray, Island Creeks, Blue Points and the simple Eastern oyster. Each has their own distinct flavor to the discriminating palate, which is directly influenced by the body of water where they called home. For health reasons, most states only harvest oysters during a month with an “r”.

Raw oysters are served on the half shell, usually sitting on a bed of ice. They must be alive when eaten, so it is important that they be cold and juicy. An assortment of dressings such as cocktail sauce, lemon or vinegar can accompany the oysters, but purists insist on slurping them directly from the shell along with the juice.

There are many excellent restaurants along the Grand Strand that serve raw oysters and some that specialize in these delicacies. Here are a few that have consistently been favorites with locals:

A chalkboard hangs next to the front entrance of Pawley’s Raw Bar, Crab and Seafood Shack displaying the day’s specials. Today the appetizer is Shark Bites and the fresh catch of the day is Wahoo. Tempting, but there is one item and one item only on this trip, and that is raw oysters. The oysters are served on a round, chilled, aluminum tray filled with a layer of ice. According to manager Brooks Scharf, the oysters were Connecticut Blue Points and they did not disappoint. The flesh was firm, but not tough. Salinity was medium and the juice was cold and plentiful. Also on the menu is an oyster shooter for $3. It consists of a raw oyster, cocktail sauce, hot sauce, pepper and vodka in a shot glass.

If you walk into Shucker’s Raw Bar on Kings Highway in Myrtle Beach with a collared shirt on, you may feel overdressed unless it is a golf shirt. This is strictly a casual local raw bar. This is in sharp contrast to its counterpart at Broadway at the Beach, which feels a little more touristy. The friendly waiter was not sure where the oysters were from, but assured me that they were good. Ranging in size from petite to large, they were ice cold and plump with a sweet flavor reminiscent of the Georgetown area. With more than 20 years at the same location, Shucker’s knows oysters.

Tucked back in the trees off of U.S. 17 in Murrells Inlet, On The ½ Shell is easy to miss, but once you try it you will have a hard time driving by without stopping. A local’s favorite, it offers a friendly atmosphere and reasonable prices with both inside and outside dining. Owner Mickey Calderiso said the oysters were from Apalachicola, Florida, and their high salinity, firm texture and sweet aftertaste confirmed it. Served ice cold, they needed no dressing, but I was not disappointed when I tried the homemade cocktail sauce. Calderiso shared his recipe of just the right combination of horseradish, lemon, Old Bay and vinegar in a ketchup base. He didn’t fail to point out the 30 flat screen TVs or that raw oysters are always half price Monday through Friday from 4–7 p.m.

Year after year, Rockefellers Raw Bar in North Myrtle Beach is voted best on the Grand Strand for good reason—they’ve been serving quality raw oysters to locals and visitors for more than 20 years. Owners Jeff and Laney Vallancey have worked hard to keep it casual and local. When you walk in the door, you get the same feeling as slipping on your favorite old sweater—comfortable. The oysters were local and served cold, plump and juicy with an ample supply of lemon wedges. Petite in size with medium salinity, they were enjoyed while talking golf with a snowbird. 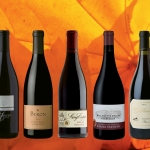 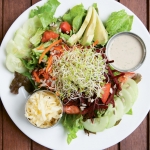 Three local restaurants get back to basics with organic, non-processed menu offerings 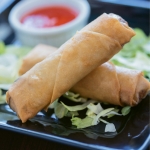