Save the Cinderella story for fairy tales. This story of the beloved Coastal Carolina University baseball team is a textbook, a reader’s manual if you will, on how to win a College World Series. It’s a story of guts, grit and heart. It’s one that tells of how a ball club, led by a wise coach, went on a whirlwind run of 55 wins to take home its first-ever championship trophy from Omaha.

Our hometown Teal Nation couldn’t get enough of these champions. We shed tears of pride, shone teal lights on our SkyWheel, lined the streets to welcome them home and dressed our Krispy Kremes in school spirit.

It’s nice to hear about an underdog who defied the odds. And one with so many inspiring layers and impressive feats woven into the main storyline. Take head coach Gary Gilmore, named the 2016 National Collegiate Baseball Writers Association National Coach of the Year and Big South Coach of the Year for the ninth time. He’s led the baseball program at CCU, his alma mater, for 21 seasons, but he almost left in 2008 when he was seduced by Auburn.

Want to know what had him turn down a bigger paycheck to coach at an SEC school laden with resources Gilmore could only dream of at the time? His unconditional love and loyalty for the Chanticleers. That, and CCU president David DeCenzo’s promise to build him a stadium worthy of the team’s national ranking. The new Springs Brooks Stadium, part of a $15.2 million renovation to the baseball and softball facilities, as well as a hitting and practice venue, opened last season. In Gilmore’s tenure, CCU has made 15 NCAA Regional appearances and three NCAA Super Regional appearances.

Then, there are the players. Not only do they have giant-strong bats and fearless fielding, but off the field they boast the highest team cumulative GPA in the College World Series at 3.17. Standouts include outfielder Conner Owings, who was named the Big South Player of the Year, and right-hander Andrew Beckwith, who won the Most Outstanding Player Award at the College World Series, was named the Big South Pitcher of the Year and received 2016 Gregg Olson Award for Breakout Player of the Year. Owings and designated hitter G.K. Young, the Conway native who hit the series-winning homer, were first team NCBWA All-Americans and third baseman Zach Remillard and right-hander Mike Morrison were named to the third team.

Careers will continue post season for six players drafted in June: shortstop Michael Paez in the fourth round to the New York Mets, Remillard in the 10th round and Morrison in the 27th round to the Chicago White Sox, right-handed pitcher Alex Cunningham in the 28th round to the Detroit Tigers, Young in the 31st round to the San Diego Padres and Owings in the 34th round to the Arizona Diamondbacks. In July, shortly after winning the College World Series, outfielder Anthony Marks signed with the San Francisco Giants and catcher David Parrett signed with the Tampa Bay Rays.

Those are impressive stats after closing a championship season that began with a No. 24 ranking. Not bad, for a little team with a lot of heart. The moral of this story? Never look back. 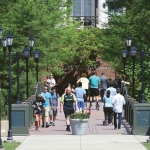