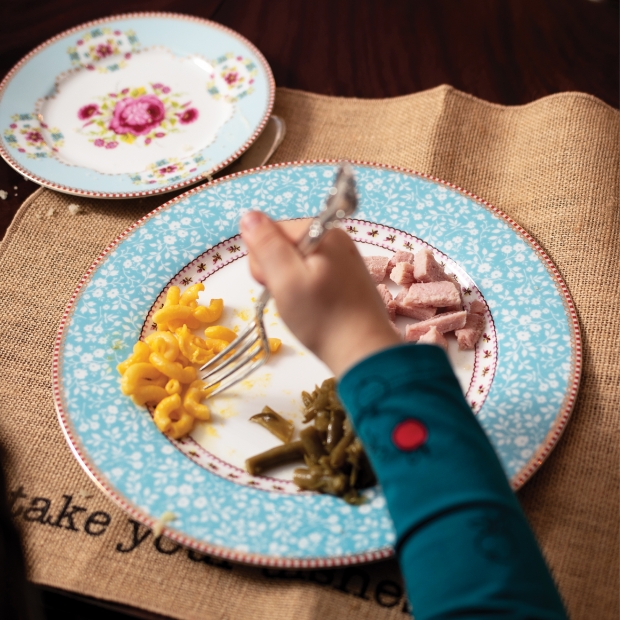 Just like disco and cassette tapes, manners for many are outdated. Flo Phillips knows this, and she is sorely disappointed by it all. So, she is doing what she can in hopes that pleasantries never go bye-bye like brontosauruses.

Ms. Flo, as she is called by children and adults, is a woman adamant about courtesy. That’s why long ago, after teaching the subject at private schools in Pawleys Island, she decided to continue sharing the value of kind words and thoughtful behavior with little ones. Since then, countless kids have been schooled on the ABCs of unwritten Southern commandments.

“I taught school for over 40 years, and I have seen good manners in many children decline,” Ms. Flo said. “I believe that social media has been a culprit.”

Her 70-year-old eyes have witnessed men wearing hats and caps in buildings and men walking around with their pants hanging off their derrieres. Women get low marks in Ms. Flo’s grade book too because they pop gum in church and public and wear skimpy clothes.

“Adults should be making good examples for our youth,” she said.

Hence, she launched Ms. Flo’s Manners Camps, a place on Earth where kindness and courtesy will forever be in vogue. 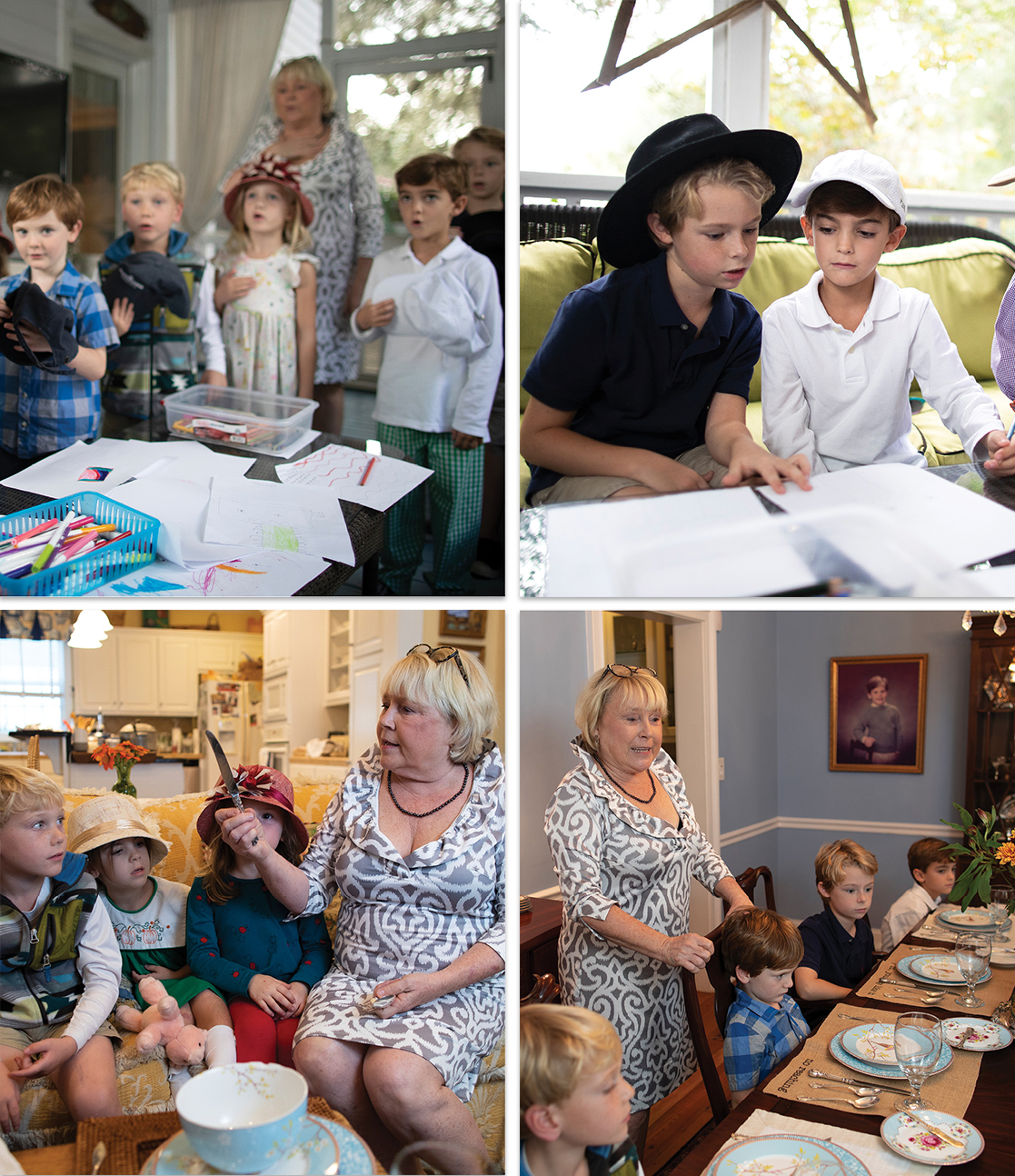 Manners Moments - (Clockwise from top left): Ms. Flo and her mannerable students recite the Pledge of Allegiance after writing notes of thanks to their parents for allowing them to attend the camp; Rudd Watkins, 8, a Manners Camp graduate and a kid helper, assists Carter Edge, 6, with his thank you note; before manners campers are served their formal meal, Ms. Flo shares what’s for dinner; (from left to right) Drew Thompkins, 6, Palmer Edge, 4, and Mary Albergotti, 5, listen closely as Ms. Flo gives them a lesson about how to set a table.

Just off a stretch of Pawleys Island road, where oak trees greet drivers for miles with their moss and majesty, Ms. Flo lives in a stately house with her 70-year-old husband, Phil, one cat and five dogs, including the fussy Chihuahua named Tia Maria. Her 16 pet chickens live behind the house.

The landscape alone looks like a painting created by a famous impressionist. A trio of iron-wrought furniture, white in color and rusted by time, stands on layers of pine needles and under three towering pine trees. A short walk beyond that space reveals a brick sidewalk leading up to five steps, ending at a black door. When it opened one October evening, Ms. Flo’s electric smile greeted petite visitors ready to be properly mannered.

She seated the eight children in her spacious sitting room dominated by furniture in vivid hues of yellow and blue.

Like a congregation engrossed by a riveting sermon delivered by a preacher orating as if Jesus was seated on the front pew, they listened intently. Barely blinking.

Ms. Flo asked, “Have you ever heard of the Golden Rule?”

Ms. Flo acknowledged her with a nod.

“That’s right,” Ms. Flo said. “The Golden Rule is that you treat people the same way you want to be treated. We respect each other. We have to respect a lot of things.”

Then, one by one, hands jerked up and a litany of perspectives about the Golden Rule was shared.

“You must listen to your parents,” Clara Sue Cisene, 6, said.

She sat alone in a chair, legs crossed, dressed brightly in a sherbet green top accented by splashes of pink that was a fashion hit with her coral-colored tutu, which was only outdone by her sparkly, gold shoes. She completed the outfit with a necklace with pink, yellow and blue tassels.

She was well behaved. They all were. Hence, their disposition revealed they came from homes where manner deficiencies aren’t allowed. Nevertheless, their manners were a tad dusty and needed the shine of Ms. Flo’s wisdom.

The first example of forgotten manners materialized after Lauchlin returned from a restroom break and rejoined the group.

“A lady has walked into the room,” Ms. Flo said. “So, all the gentlemen, please stand up.’’

The boys sprang up faster than Pop Tarts from a hot toaster. Ms. Flo smiled at them. They smiled back. The night was still young, and there were many manners yet to be discussed.

Common courtesy and table manners are forever on the lesson plan. Tours around her gorgeous property, interactive games, mini dance parties and meeting her chickens are standard too. Sometimes, cooking lessons may be included.

Held several times a year, Ms. Flo’s Manners Camps are almost always held at her home. The only time the children venture away from her residence is for the finale meal, which is at an upscale eatery of her choice. She takes care of the bill, while the children are asked to bring a tip their piggy banks can afford.

Typically, each camp consists of at least three classes. Children are asked what types of food they would like to have during the initial session. Chicken and steak were mentioned first, as well as strawberries, peaches, broccoli and string beans, at the manners camp held in October.

“Why don’t we have seafood?” 6-year-old Drew Thompkins interjected. “I want lobster and oysters.”

Ditto for others. Food from waters deep and shallow was indeed their preference. Ms. Flo appeared a wee bit shocked.

“I’m not going to serve seafood because I’m afraid you all will be allergic,” she said and smiled with genuine concern.

“We’re not!” All the children exclaimed.

“Well, it’s too expensive,” said Ms. Flo before helping her husband serve the meal. The children gave her dubious looks.

“My grandfather wore a suit, tie and hat nearly every day,” she said. “My grandmother was a very strict German lady who always made us toe the line.”

“She would ring a little bell, and the meal would be served,” Ms. Flo said. “That was really fancy to us. She told us many wonderful stories and encouraged us to use lovely manners at all times.”

The polite-is-always-right protocol passed on down the line to her parents, both of whom carried the practices with pride.

“My daddy (Eugene Stone Miller) always stood up when anyone came in the room, walked ladies to the door or car and held the door for everyone,” she said. “He never wore a hat in the house. He was lots of fun, but taught us good manners and expected us to use them.”

Manners were a must, not an option. 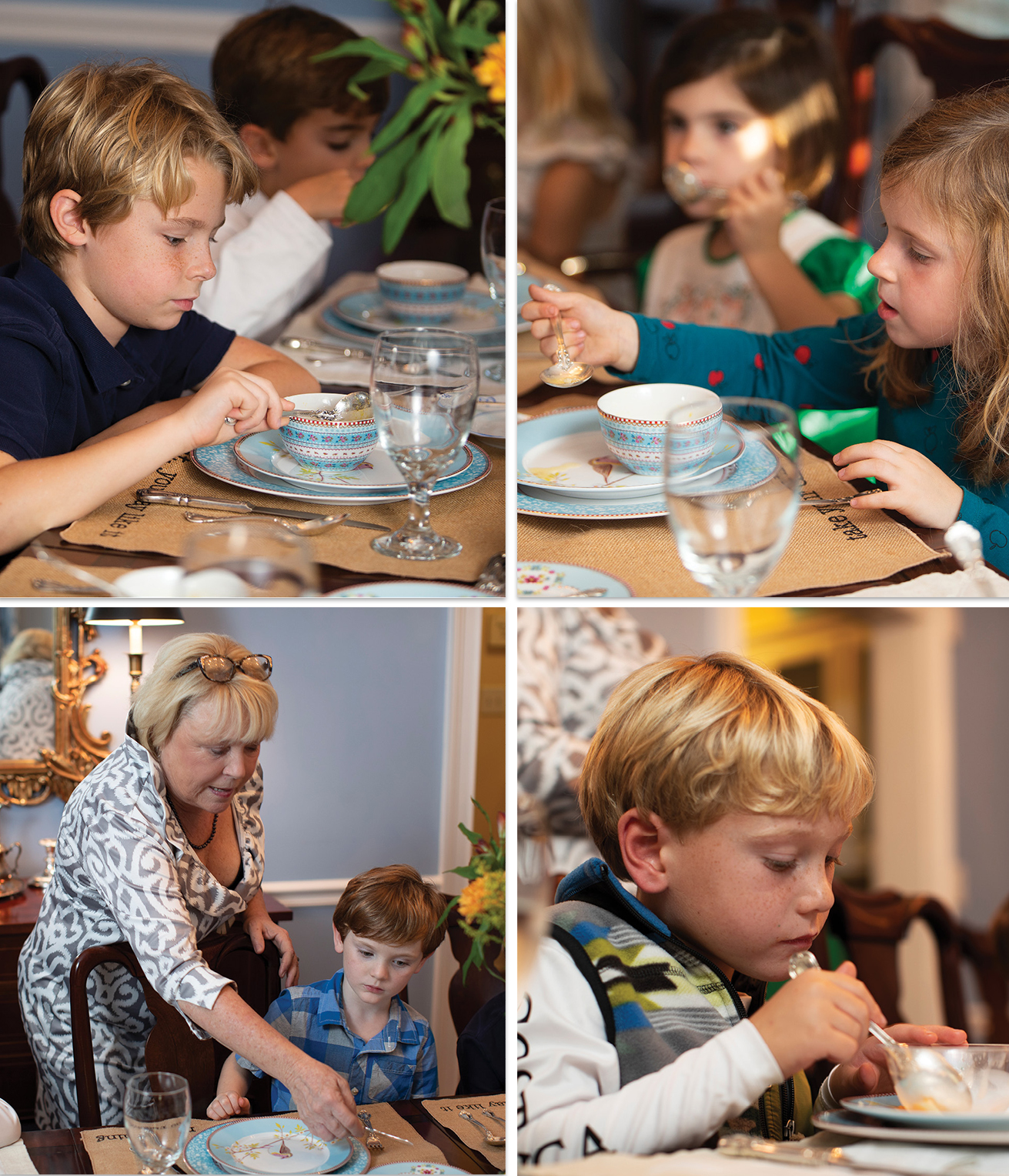 The evening was truly divine when the children returned to Ms. Flo’s house for more manners lessons later in October, when they put their knowledge into action during a formal meal.

Lauchlin knew what should be done and said if a burp came up. She also knew the difference from a dinner fork and a salad fork. Clara remembered her manners as well. She shared how to properly eat a slice of bread.

“You don’t butter the whole thing,” Clara said. “You tear a piece off and just butter part of it, and eat that part.”

At this particular juncture in the evening, the children were all sitting down at the long, mahogany dinner table. Atop burlap placemats that read “try it, you may like it” and “no reaching,” fine china trimmed in blue was placed. Sparkling silverware and spotless water goblets also graced the table.

This would be a night to remember, and it was. The evening started with them learning how to properly eat soup.

“Out to sea and back to me,” Ms. Flo said while demonstrating. “If you do it this way, the soup won’t drip into your laps.”

Then, the children went to work. Spoons dived into the chicken and pasta soup, came up for air, went out to sea (which means away from their bodies) and finally zoomed into their mouths. Within the hour, the children had cleansed their palates with sorbets and ate a meal featuring ham, macaroni and cheese, green beans and Ms. Flo’s homemade bread again. They even learned how to use finger bowls.

Her formal dinner lesson was a polished achievement. There were no spills, and, more importantly, no lapses in etiquette.

Now, she was assured that at least eight children were hip to why kindness counts and manners matter.

Do you want your child to attend Ms. Flo’s Manners Camp? Classes are held, depending on the potential campers’ schedules, several times a year. The next class will likely be held in April. The cost is $150 per child, which includes the cost of all meals, materials, etc. You can reach Flo Phillips at (843) 385-2968 or at Fkillen@sc.rr.com. 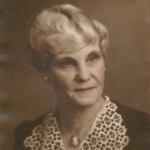