Willbrook Plantation home gets an update to its beach-style decor

Current tastes and trends have put pressure on the design world to freshen up beach-style décor and shake the cheesiness out of coastal-themed interiors.  The day has come, my friends, where sea foam green, shell lamps and nautical fixtures no longer define the seaside aesthetic.

So what is the new and improved alternative to starfish-embossed cushions and sisal rugs?

It’s still evolving, but it’s safe to say that homeowner Carmel Mamajek and designer Robin Johnson have put their stylish stamp on what is to become the quintessential “modern coastal.”

A Georgetown, S.C., native, Carmel waited 20 years to get back to her roots. She met her husband, Gene, on a vacation in Key West where he was stationed as a jet pilot for the Marine Corps. Nine cities, eight homes and three children later, Gene always promised his wife that when he retired, their final move would be hers.

Even though their Southern Traditional home in Litchfield’s Willbrook Plantation was tired and stuck in the ’90s, Carmel could appreciate its “good bones” and spacious potential.

“I loved the neighborhood,” Carmel says. “I always knew I wanted to have a lot of oak trees and a beautiful yard. … I had to look past the emerald green stone in the kitchen.”

Armed with 10 years of clippings and swatches and disconnected ideas, Carmel reached out to Robin Johnson of Urban Interiors for a half-day consultation service. They “zoomed through about 500 design questions and answers” and Carmel quickly realized that Robin got her eclectic tastes and could pull them into focus. Carmel decided to work with Robin to create the home of her dreams.

Like it or not, white has made a big comeback and nothing ties together a coastal design scheme like a seamless creamy canvas.  From trim to cabinetry, all along shiplapped walls (eat your heart out Fixer Upper’s Joanna Gaines!) and slanted ceilings in the upstairs bedrooms, combinations of white paint give the entire house a cohesive, cottage-chic vibe.

The new coastal theme calls for pops of color but more or less stays away from the hot tropical hues of the past. Carmel and Robin went for bluesy notes that show up in a classic Walker Zanger tile kitchen backsplash and a deep navy on the walls of the powder room.

Cotton and linen fabrics make simple yet sophisticated window treatments and chair covers. Roughhewn walnut tops the kitchen’s centerpiece island and acts as an accent shelf for the new farmhouse sink. Tongue and groove, in-the-buff pine lines the pantry (cleverly carved into unused space under the stairwell), the family room ceiling and up the stairway. The mudroom floor was replaced with hard-working brick in a herringbone pattern. And sea grass rugs and runners skip along high traffic areas.

Driftwood has been making itself known for some time in coastal interiors, artfully fashioned into chandeliers, sconces and table bases. The Mamajek home employs this natural element with a scattering of accessories carved out of the sun-bleached woods that have washed ashore.

Satisfying the core tenets of “modern coastal” with whites and naturals and hits of color, the Mamajek home also blends in some touches of glitz and glam.

You cannot ignore the stunning effect of Chippendale woodwork here that replaced the former railings of the upstairs loft area and is worked into wainscoting in the powder room.

And then, there’s the gold.

Gilded geometric hardware and hanging light fixtures in the kitchen play off simple Shaker-style cabinets and seeded glass. The understated butler’s pantry is lighted by a one-of-a-kind gold pendant in the shape of a sea fan and a repurposed gilt mirror hangs smartly in the half-bath like brass buttons on a dark blue suit.

On the artistic front, nothing says “modern coastal” quite like the Mamajek’s antique chest vanity that features a hand-painted vessel sink by Susan Lumpkin. Rather than a Palmetto tree or surfboard, the depiction of “Rice Birds” nods to the grace of our Lowcountry marshes.

The bulk of renovations took a little over a year and Carmel is still tweaking things and talking to Robin about moving a wall here and there or combining two baths into one or rearranging artwork.

A home is a never-ending labor of love and the Mamajeks have waited more than 20 years to get to this time and place, holding onto the dream of having their perfect coastal home surrounded by oak trees, Southern aesthetic and modern sensibilities. 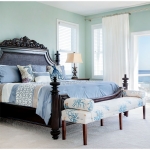