We step inside four homes from the Franklin G. Burroughs-Simeon B. Chapin Art Museum Home Tour that mirror the owners’ passions and pastimes

A home can have personality, that’s for sure. But Kendall Battleson’s home screams of a colorful character that can’t be contained within the four walls of a home in a Fablehaven book. It’s bigger than that. And louder than a champion squad from Battleson’s All-Star Cheerleading dynasty.

Start at the front doorstep, with the home’s history. Qualifying for the National Historic Register, the property chain dates back to the summer of 1938 as one of the lots surrounding the former Ocean Forest Hotel that sold for a few thousand dollars cash. Since then it has been inhabited by a former mayor of Myrtle Beach in the late 1940s and a string of others—it even survived Hurricane Hazel. The Battlesons purchased it in May 2014.

On the other side of the door is a unique antique lock Kendall had sent to Charleston to get refurbished and to retrieve some more history about. While no exact date was determined, she was told it was extremely old and valuable. In fact, all door knobs and hinges in the house have been replaced with older, polished hardware.

She’s paid painstaking attention to every square inch of the 2,000-square-foot home, or what she calls a “cute cottage, like one in Harry Potter,” keeping original pine floors, walls and ceiling beams, but widening doorways and swapping the dining room with the kitchen for a more functional galley-style prep and storage area.

“I don’t use a decorator because I think they try to insert things into the décor that they want, not what you want,” she says.

What she did want was a palette of pink, from the pair of zebra print pink armchairs in the front living area to the peacocks strutting across the dining room wallpaper to the window treatments in the patio walk-through to her daughter’s surfboard stored above the staircase.

That’s a personality that can’t help but be the center of attention.

They call it Castillo de Angelo, this charming estate erected in the Castillo del Mar section of the Grande Dunes.

Cindy Tozzoli’s four-bedroom home is indeed heavenly, with traces of her angel, late husband Guy Tozzoli, living in the rare mementos from his noble past on shelves, end tables and curios placed in each room. Guy passed away in 2013, 10 days before his 90th birthday. As founder of the World Trade Centers Association, he was a seven-time nominee for the Noble Peace Prize for his beliefs that world peace could be fostered through world trade. During his time as director of world trade for the Port Authority of New York and New Jersey, he also led the building of the World Trade Center in New York City.

Today, Guy’s 1929 baby grand he learned to play at age 4 sits as a showpiece in front of the floor-to-ceiling windows of the living room, where golds, bronzes and a chandelier draped with diamonds and a ceiling painted by artist Tommy Simpson also mark his presence.

Additional pieces include an ornate wedding box given to Cindy by South Korean officials, a gold camel from Saddam Hussein, a vase from Madame Wu Yi of China and antique ivory carved tusks from Nigeria.

“Cindy has exquisite, discerning tastes,” says Don Frazier, friend and interior designer, who has also helped to infuse Cindy’s preferences since the Tozzolis moved into Castillo in 2011.

Most recently, the master was refurbished with soft mauves and pink pastels. And two other interests Cindy has, books and birds, are represented well in her collections of 19th century literature standing tall in various built-in bookshelves and a set of antique china with birds nesting on the dining room table, where Cindy loves to entertain.

What began as a small request for a sunroom makeover from homeowner Linda McKenzie to friend/interior designer Kimberly Grigg one day in the grocery store turned into a house overhaul that left Linda feeling blue.

“She told me she liked blue, so I ran with it,” says Grigg.

And that she did. The standard beige Grande Dunes canvas that complements reds and golds so well was replaced by a bath of beautiful blues, tinged by greens and grays.
“I just love my house now,” says McKenzie. “I wanted to really feel something in each room.”

Grigg says she took McKenzie’s love for fancy things, updated them and worked around the leftover golds. The exercise room at the end of the  hall, for instance, was transformed into a mini master fit for a princess.

“I think that’s my favorite room I’ve ever done,” says Grigg. It’s McKenzie’s top choice, too, out of her four-bedroom, 4,000-square-foot home. The sunroom, the starting point for Grigg’s upheaval, isn’t so bad either.

Another special place runs the length of the opposite end of the house and features a wall of fame of sorts of McKenzie’s career show dogs over the last nine years captured in oil portraits painted by McKenzie herself. Her two Huskies, Tempo and Tango (one champion and one puppy), lounge in the master bedroom like two soft, furry, white throw pillows without making a peep.

McKenzie, a native of Myrtle Beach, moved to the Grande Dunes from Pine Lakes to decompress, resort-style, after her husband’s retirement. “What I gained, and what I hope to share when others walk through, is a lasting impression in my home,” she says.

Walk out onto the master bedroom mezzanine of this home that overlooks Myrtle Beach’s cabana section and you won’t want to move a single square inch.

The bird’s-eye-view of the blue Atlantic is priceless, but you may also want to take advantage of the nearly 4,000 square feet of this massive three-story, five-bedroom second home that pays homage to the beach at every turn.

Wood-style tile laid underfoot is perfect for sandy feet on the trek from the beachfront to the home’s private cabana across Ocean Boulevard. After a tiring day under the sun, you can take the stairs (or the home’s elevator when your hands are full), from the ground floor that boasts three bedrooms with bunks, a full kitchen and living area for the kids, and beach-friendly acid-wash concrete flooring to the third floor master bedroom suites.

On the third floor, master bedrooms flank a kitchenette and desk work space right at the top of the stairs, with a bar top of shellacked tobacco leaves, a nod to the owner’s tobacco industry background.

Maritime décor appears in waves throughout the home, including nautical rope that winds around lamps and furniture accents, metalwork chandeliers that hold candle-esque lighting, beach scene and coral prints, and a paint palette of tranquil blues.

“It’s a great balance of both modern and rustic,” says Sarah Jeffcoat with Palmetto Corp Builders. “The owner is a tall guy, so he also wanted a lot of open space.”

And his wish was their command, with an open layout on the main floor from the kitchen to a cozy living area centered by a stone stacked gas fireplace. 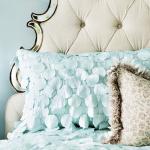