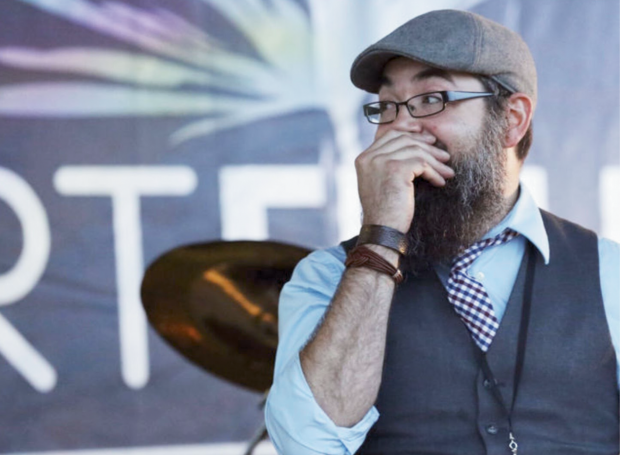 Captivating on their surface, Charles Clary’s works of cut paper mesmerize with their color, design, texture and illusion of movement. Geometrical patterns and layers build and recede within a larger framework of shape and proportion, creating 3-D pieces that attract and delight the viewer on first glance, yet reveal more complexity with a longer investment of time and attention.

The same can be said for Clary himself.

Clary, Coastal Carolina University assistant professor of visual arts, rose to acclaim last year when he won ArtFields, a prominent Southeastern art competition and festival in Lake City, S.C., that accepts work from 400 regional artists and carries a $50,000 top prize. His installation work Be Kind Rewind recreated a video store from the 1980s, complete with an entire wall of more than 200 found VHS boxes, arranged by genre and each embedded with a design of hand-cut paper. The exhibit was also interactive, including a VHS player and 170 movies that patrons could watch.

Winning the award was a surreal experience, Clary explained.

“It was an awe moment of, you’ve arrived; you’ve finally put that feather in your cap,” said Clary.

At the same time, the award is just one stop on the artist’s journey of telling his story and connecting with the viewer.

“In the same breath,” Clary acknowledges, “it’s not about the win; it’s about the experience. Is your work telling the narrative that you want, and is the viewer getting what you’re trying to say?”

The message entrenched within Clary’s work is both playful and somber. On the one hand, viewers experience an immediate sense of wonder and delight to behold a dizzying array of iconic films in a time-honored medium, especially with their decoration of compelling patterns. However, the VHS boxes, as well as other bodies of Clary’s work, spring from a darker place, representing strength and redemption in the face of powerful obstacles.

Clary’s interest in VHS as an art form grew out of a reflective period following the deaths of both his parents in February 2013 to smoking-related illnesses. His childhood had been marked by neglect and chaos, as both his parents were alcoholics. The weekly ritual visit to the video store allowed him to temporarily escape his surroundings, and he harbored a special interest in horror and science fiction films, which figure prominently in his work.

“At first I didn’t know why I like horror so much, but it was the narrative of the unintended hero,” Clary said. “They have to circumvent something that’s thrust upon them. And they either come to the challenge and rise above it all or they succumb to it. So I thought, yes, these things have happened, but look at me now, how I’ve come out of it. The idea with the found VHS boxes is to save things from destruction and give them a beautiful second existence.”

Viewers of Clary’s work at ArtFields may not have interpreted the story behind the VHS boxes, but the nostalgia and celebration of yesterday’s pop culture rang through loud and clear.

“The judges said they kept coming back to the exhibit; there was something about it that drew them to it,” said Clary. “There was that nostalgic moment that they could all relate to. It created a kind of unintended shared moment.”

Two other bodies of Clary’s work employ the same medium of hand-cut paper. One is a series of paper structures comprised of stacked pieces, each cut in unique patterns, resulting in an image reminiscent of microscopic slides. The other involves ornate, antique photo frames filled with repurposed wallpaper. The wallpaper is cut and filled with paper structures, creating “beautiful scars.”

While ArtFields brought Clary recognition, it represents only one piece of the artist’s big picture. Clary schedules 12 exhibitions a year, with the 2017 lineup including Art on Paper in New York in March and the Currier Museum in New Hampshire through May 21. In addition to teaching a full load of classes and serving as Area Coordinator for CCU’s Department of Visual Arts, he works in his studio for hours every day.

“He’s got one of the most rigorous work ethics I’ve ever seen,” said Easton Selby, chair of the CCU visual arts department. “He’s a nice inspiration for our students because he is so rigorous in his practice, he exhibits internationally, and he sells work like crazy.”

“There’s always that myth of the starving artist,” said Clary, “but it’s only as much of a crap shoot as anything else.” 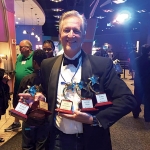