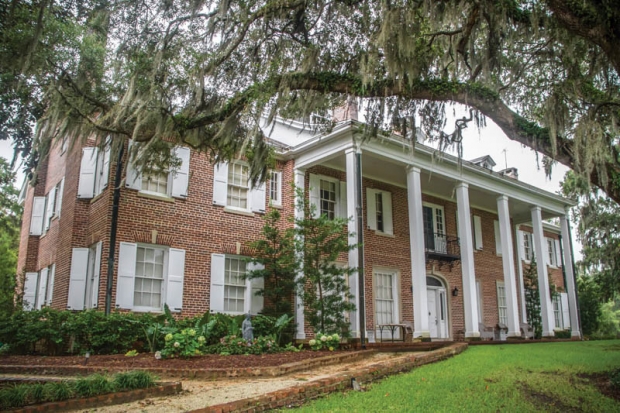 Just a pleasant 30-mile drive south of Myrtle Beach is a 16,000-acre local treasure teeming with history and rich ecology. Hobcaw Barony is the former reserve of Bernard Baruch, a self-made millionaire born in Camden, South Carolina, in 1870 and is now owned and managed by the Belle W. Baruch Foundation, named for his eldest daughter. It is a place well-deserving of a day’s visit, filled with all the wildlife and plant life native to our coastal Lowcountry, and its historical significance is the stuff of legends.

Though born in Camden, Baruch’s family moved to New York when he was young. His father, Simon, emigrated from Hamburg, Germany, in 1855 and was a medical officer for the confederacy. Simon moved his family to New York after the Civil War and taught medicine at Columbia University, where he developed new surgical procedures, including the appendectomy.

Baruch grew up to be a brilliant Wall Street investor, becoming a millionaire before age 30. He was a visionary who foresaw the 1929 stock market crash and made a fortune short-selling stock. Among others, he advised humorist Will Rogers and political friend Winston Churchill to exit the market, protecting their assets.

His reputation and strategic thinking got him involved in national and global politics, and he was a tremendous asset to the United States in both world wars. In 1905, he began to purchase 14 separate plantations that he assembled into the reserve that today is Hobcaw Barony. It consists of the entire neck of land east of Route 17 and north of Winyah Bay in Georgetown, making it the southern terminus of the Grand Strand. Hobcaw is Native American for “land between the waters.”

Baruch could have served in the cabinets of seven presidents, but chose instead to be a “behind the scenes” advisor. He would be seen often on a bench in Lafayette Park near the White House conversing with government and civic leaders, which earned him the moniker “Park Bench Statesman.” The Boy Scouts erected a commemorative bench there in 1960 on Baruch’s 90th birthday. Baruch College in New York also has a life-size bronze statue of him sitting on a bench.

Sir Winston Churchill first came to Hobcaw in 1932 to recuperate after being struck by a car in New York. President Franklin Roosevelt was at Hobcaw in spring 1944 to rejuvenate from his poor health. His four weeks at Hobcaw was the longest vacation of his four-term presidency. It was here that he put the finishing touches on the Allied plans for the D-Day invasion of Normandy. After a month of rest at Hobcaw, along with some invigorating fishing and hunting, FDR returned to Washington in much improved health.

In late 1944, Baruch joined Dr. Howard Rusk, an Air Force physician, in counseling Roosevelt to expand rehabilitation programs for wounded service men and women. Their suggestions were instituted by the end of the war by the Veterans’ Administration.

President Harry S. Truman appointed Baruch in 1946 as the U.S. Representative to the United Nations Atomic Energy Commission (UNAEC). Baruch developed a plan that proposed international control of the emerging field of atomic energy. The Soviet Union, far behind in the atomic energy race at that time, rejected his proposal and a stalemate ensued.

Baruch continued his advisory role until his death in 1965 at the age of 94. Over the decades, he continued to entertain countless government leaders and celebrities at Hobcaw. His funeral was attended by 700 people.

Baruch’s daughter, Belle, is quite a legend herself. Born in 1899, she became a world-class equestrian and hunter, a pilot, and an ecologist well before the term became popular. By age 17, she had won more than 50 sailing trophies. She worked for the Red Cross during World War I and taught Morse code at two Army aviation camps. She was a woman who was very determined and competitive in many areas often dominated by men. She was openly gay well ahead of her time and worked her entire life on advancing women’s rights and opportunities.

During World War II, Belle volunteered as a coastal observer, patrolling the South Carolina shoreline for German U-boats from her beach cottage. She also gave the U.S. Army use of her private airplanes. Before the war, she was in Europe with her prized horse, Souriant, and other horses, competing in equestrian events. In 1930 and ’31, she won the President of the Republic Cup at the Paris Horse Show. She was so successful that both Hitler and Mussolini wanted to buy her horse, which she refused. Churchill contacted Baruch in 1936, strongly recommending that he bring his daughter and her horses back home, as things in Germany were getting very ugly and the Fascist leaders were not pleased with her.

Belle returned and spent much of her later years at Hobcaw. She built her house in 1936, along with her horse stables, dog kennels and airplane hangar. Belle died in 1964 and in her will she established the not-for-profit foundation that today owns and manages Hobcaw.

Today, Hobcaw Barony is a living laboratory of history, culture, flora, fauna, anthropology and archeology. Visitors can see the remains of rice plantations and vast tracts of nature preserve with every species of plant and animal native to our Lowcountry. Tour attendees often see squirrels, rabbits, deer, wild boar, turtles, frogs, alligators, snakes and countless birds and waterfowl. The property includes cypress and tupelo swamps, saltwater marshes, and thousands of acres of hardwood trees and longleaf pines, which are often the homes of the endangered red cockaded woodpecker.

A large portion of the King’s Highway, one of America’s oldest roads, runs through Hobcaw from Route 17 to Winyah Bay south of Baruch’s house.

There is a well-preserved village featuring the modest dwellings where slaves, and later freed people, lived and worked, including a chapel. Other villages had a school and a commissary. Baruch cared for the descendants of slaves who were born there and did much to improve their lives, expanding their dwellings and adding amenities. Belle also took an interest in their welfare and appointed herself “truant officer” for the school, sometimes chasing down students playing hooky on her horse and delivering them to the school.

Belle’s house and stables are preserved, as is Bernard’s luxurious main house overlooking Winyah Bay. There are organized tours available that show visitors every aspect of the preserve and properties. Visitors will see the house preserved as it was when Baruch lived there, including artwork and furnishings. The chair that Churchill occupied is even on display. There are five well-preserved cemeteries.

George Chastain is executive director of the Belle W. Baruch Foundation that owns and manages Hobcaw Barony. He employs 12 full-time staff members and has a team of more than 100 dedicated volunteers. The foundation is guided by a local volunteer board of 12 individuals and offers a wide array of programs in addition to tours. In 1982, it opened the Bellefield Nature Center, a learning facility for children and adults alike. That facility is is

now the Hobcaw Barony Discovery Center, remodeled and enlarged in 2009—a partnership between the foundation and the North Inlet Winyah Bay National Estuarine Research Reserve.

“We at Hobcaw Barony work daily to conserve the cultural and natural resources entrusted to our care,” says Chastain. “We are proud of the natural laboratory we provide, where hundreds of researchers from all over the world come to gain a better understanding of our environment, how our environment has guided human activity, and how human activity has shaped the environment.”

Dr. Jay Pinckney is director and professor at USC’s institute and a leading scientist who does important research in addition to managing the institute. He has approximately 40 scientists and graduate students on his team.

Dr. Skip J. Van Bloem is director and professor at Clemson University’s institute and leads a team of more than 20 scientists and graduate students.

“Scientists and students at the Clemson University Baruch Institute of Coastal Ecology and Forest Science ask practical questions aimed at helping our communities manage their natural resources in a more sustainable manner,” says Van Bloem. “Our research includes forestry, wildlife, and the quality and quantity of freshwater in the area. Forestry is a major economic sector in South Carolina and wildlife management helps provide stable and appropriate populations of game, endangered and nuisance species. Our livelihoods rely on having enough water on the landscape, but not too much, and that our coastal freshwater is clean enough for swimming, drinking water treatment and agricultural use.”

Richard Camlin is Coordinator of Adult Education for the Belle Baruch Foundation. Richard wears several hats in his role, managing tour programs, special events and activities to engage the community and visitors.

“We are proud of the role Hobcaw Barony plays in our local community,” says Camlin. “As a research reserve and private property with public programs, we are an asset for locals and visitors alike. Throughout the year, we offer programs for all ages that cross multiple subjects from history to ecology. We appreciate the support we have received from the Grand Strand community and look forward to preserving this gem of the Lowcountry for future generations.”

Hobcaw Barony is a short drive south of Myrtle Beach on U. S. 17. Heading south, it is the last left turn before the bridge to Georgetown and just south of DeBordieu Colony. Visitors should call ahead for specific details and availability of tours, events and programs.

Reservations are highly recommended and credit cards are accepted.

A sampling of tours and programs at Hobcaw Barony include: