October 2017
Written By:
Ashley Daniels
Dr. Marilyn Fore shares her personal and professional history as she makes history herself as the first female president of HGTC 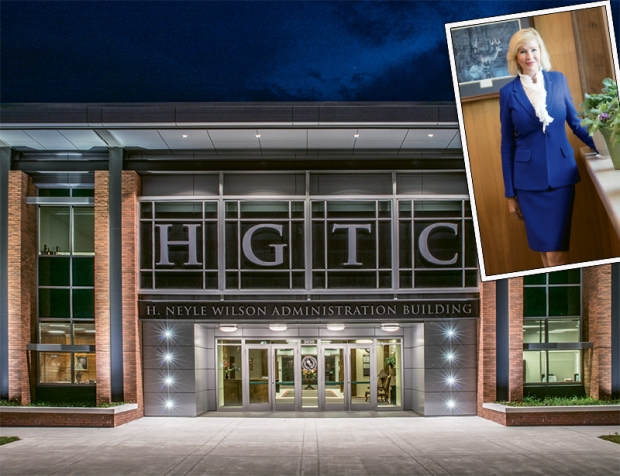 Dr. Marilyn Murphy “Murph” Fore sits in front of her large, polished L-shaped desk wearing a canary yellow leather jacket, bright pink lipstick and a crisp white skirt over her thin legs, which are crossed in front of her.

She deliberately chooses this more conversational position rather than circling around to take a more presidential-like post from behind her desk. Fore complements her new corner president’s office well. The massive windows overlook the busy flow of U.S. 501 mid-morning traffic from the Conway campus of Horry Georgetown Technical College (HGTC).

“I still can’t believe it,” she says of her new appointment on April 1 as the first female president of HGTC. “It’s a gift in life for me, and life has been good to me. I’ve had very good people who cared for my future—who saw something in me that I hadn’t seen.”

Although Fore is a picture of power and poise, she’ll often break character like this during the interview and humbly give all the credit of her accomplishments to those who have supported her throughout her life, and to the harsh childhood she endured that only made her stronger.

“I have a lot to be thankful for, and I don’t regret one bit of the life that I had,” says Fore. “What it’s done for me is to turn that into helping students have every opportunity to have a better life because I know where I came from.”

She was born and raised in Toledo, Ohio, the daughter of a brick mason, which meant the family traveled like gypsies from state to state so Dad could find work at the best construction job sites—from Ohio to West Virginia to Oklahoma to Kansas and more. At the same time, her father and younger brother struggled with mental illness, while the family also struggled with financial issues, forcing them to live in federal housing, sustain themselves on food stamps and travel by public transportation without a car.

Because of the moves every six months, Fore attended three different high schools. Despite that, she would become the first in her family to graduate from college, thanks to an anonymous donor. Today, her degrees also include a master’s in economics and educational administration from the University of South Carolina, as well as a doctorate of public service from Coastal Carolina University and an education doctorate in curriculum and instruction from the University of South Carolina.

As she tells the story, while she was finishing her senior year of high school, Fore was living with her grandmother, a role model to her, in West Virginia. An anonymous donor, who still remains anonymous today, gifted her with the money she needed to go to college—it was a someone she had met through one of her grandmother’s neighbors, and apparently Fore’s first impression went a long way.

Fore enrolled as a freshman at Fairmont State College in Fairmont, West Virginia, in 1967.

“I was going to major in math, but instead I majored in social sororities and fraternities,” says Fore with a laugh. “Let’s just say I didn’t hit the books like I should have, so I majored in the ‘social sciences.’ It was a coming out, blossoming time for me. I was spreading my wings and becoming more sociable. Moving around three high schools had made it difficult to feel socially accepted until college.”

Fore’s college undergrad years, both socially and academically, would also lay the groundwork for her accomplished work in academia, including her more than 44 years at HGTC. Fore’s migration to Myrtle Beach, in fact, was initiated by her sorority sisters, many of whom would pick up jobs waiting tables here over the summer. In the summer of 1971, her sisters called Fore to let her know there were teacher jobs available in the area. Fore promptly packed her bags and moved south.

“At that time, they were following the law to integrate schools in Georgetown County, so they needed Caucasian teachers because of moving staff all around,” she explains.

Fore was hired as a combination assistant librarian, audio-visual coordinator and cheerleading coach at Choppee School in 1971. She not only stayed busy setting up an elementary school library, but she also worked part-time at Georgetown Hospital as an elevator operator and medical coder and as a paralegal specialist for an attorney in Loris, plus took on a teaching position in the adult education program part-time at the Horry Georgetown Technical Education Center in 1974, her first role on the HGTC campus.

When Fore was named dean of the science and business programs in 1985, she says that’s when she really became deeply involved in the core of HGTC.

“I’m big on trying to be a mentor to others. My message is all about the students,” she says. “I very much love the art of teaching. … It’s what my life is all about. If you teach others that they can succeed and set an example, they will be inspired.”

Fore has set quite the precedent over the last 44 years, designing and developing 45 academic programs on the college’s three campuses, including the increasingly popular online classes, the Early College for honor high school students and international placements. She also had a hand in designing several campus buildings, such as the Richardson Art Gallery and the Robert Speir Jr. Healthcare Center. For her efforts, the science building on the Grand Strand campus was named in her honor.

But, really, she feels the honor has been hers, to give of her time, energy and passion over the last four decades to a school that gave her a chance.

“It’s been home and a major part of my life. This institution accepted me,” says Fore. “They must’ve seen something in me of value to achieve its mission, which is to serve as the foundation of this community, and as the heart and soul of business and industry here in terms of supporting the workforce here.

“And that drives me to the passion I have—and it all started with teaching,” she continues. “I love to walk into a classroom and make an impact. It’s the content, yes, but the other part of it is to give students a thirst to achieve on their own—to give students confidence. Because many times, two-year colleges draw students who need to start a career in a short amount of time, the school is in their neighborhood and it’s affordable.”

Today, HGTC offers more than 80 associate, diploma and certificate degree programs, as well as continuing education opportunities. An impressive 90 percent of graduates go on to become employed in their field of study here locally or transfer to colleges and universities within the state. And four out of every five students are residents of Horry or Georgetown counties.

As the new president, Fore has ambitious goals to build on these successful numbers.

“First of all, I am so fortunate to have inherited this position that was preceded by a very strong president, Neyle Wilson,” she says, “someone I’ve had a mutual trusting, comfortable relationship with. I want to continue that strength in leadership.”

She also shares that her goals are to venture off-campus and get out into the community more often to communicate with local industries and agencies to find out what’s needed most in a trained workforce.

“We need to continue to grow programs that reflect the community we serve,” she says, “which is why we’re adding bakery and pastry associate’s degrees, adding programs in advanced manufacturing for jobs needed, such as mechatronics, service plumbing, residential and commercial electrician certificates, as well as respiratory care and occupational therapy. These are good, solid, well-paying jobs—the kind of service jobs that everyone needs around here.”

Another major organizational goal, as a large amount of Baby Boomer staff and faculty retire, is to shift focus and bolster the staffing process with new hires and promotions.

“It’s important to make everyone feel comfortable, to make new employees feel welcome, and to have all embrace the change and focus on the same purpose,” says Fore. “Hey, I’m new in this role, too!”

But it’s a role she was born to take on—something her husband, Dr. Fred Fore, probably predicted when they first met in 1978 and sat side-by-side in a committee meeting at Francis Marion University. Fred, a retired general from the U.S. Army Reserve, served in the U.S. Army during the Korean Conflict and Vietnam War and was currently serving as president of Florence-Darlington Technical College (he was the school’s first president).

“It was probably love at first sight, this elegant man, politician extraordinaire and Southern gentleman,” she says.

After a nice conversation that night, they began dating much later in the late 1980s and married in 1991. Fore credits her husband, 20 years her senior, as her rock-solid support system throughout the years, some of which entailed a rediscovering herself after some dark times in her childhood.

“I learned a lot from him,” she says. “He taught me how to treat people better than I ever knew how to treat people. If he walked into a room, everyone in that room would feel like they were the most important person he’d met. He’s genuine and he cares; he has a way about him that is both charming and supportive.”

Fred also introduced her to God. Raised in a family of atheists, she didn’t have faith in anything growing up, much less belief in a higher power.

“Fred was always a member of the church,” says Fore. “In times of doubt in my life, Fred was the one who said that God is there.”

Today, the couple are faithful members of Belin Memorial United Methodist Church in Murrells Inlet. In her spare time, Fore says she also likes to exercise, shop on occasion, spend time in the kitchen, and hunt in the fall, hence her deer mount hanging on the north wall of her office.

But most of Fore’s time is spent continuing her legacy of nurturing the mission of HGTC.

As she puts it, “I’m fortunate to work with nine supportive board members that allow me to have the freedom to move in a steady pathway in the right direction.”