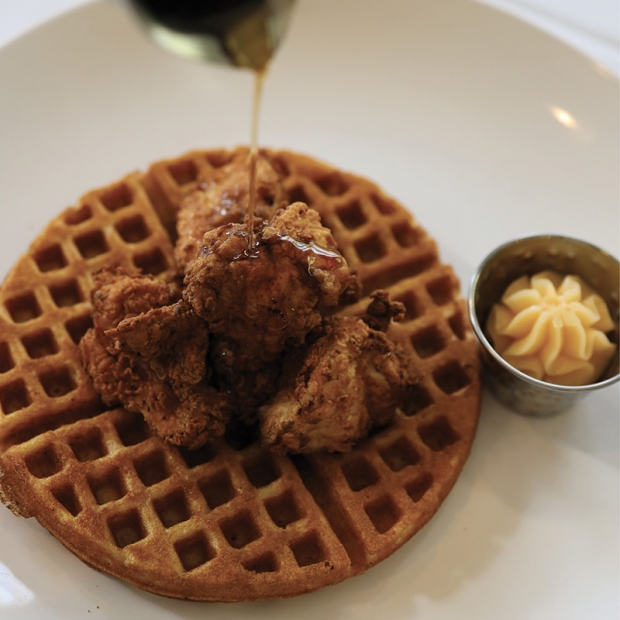 Nothing says “quaintness” quite like the Pawleys Island Hammock Shops Village, nestled along the South Strand. The newest restaurant to the neighborhood, Local, is already creating a stir for its excellent food and unique twists. They opened in late summer 2020 in what almost everyone would agree was a challenging time to open a restaurant.

“People said we were crazy and we’d never make it,” says John Dabrowski, Local’s general manager, co-owner and a trained chef well known on the Grand Strand. “But we’re already getting great reviews and return customers.”

Open six days a week for brunch (closed Tuesdays), lunch and dinner, the unpretentious Southern-inspired restaurant is divided into three primary spaces on the ground floor, known as “Eat & Drink,” and a private event room on the second floor, called “Celebrate.”

Dabrowski and his partner, chef Keith Estabrook, had been working on a plan to “open something somewhere” for the better part of a decade. Dabrowski’s wife, Peta Dabrowski, and head server/manager Peter Giordano round out the core team, who put in hours designing, constructing, decorating and planning the menu before opening.

(Left) The Skillet Cobbler, baked to order in a house-made shell and served with vanilla gelato, is just one delicious dessert offering; (Right) Creative Creations: From the crab cake to the duck leg to starters like candied bacon and nuts and vegan options like crispy marinated tofu over rice noodles, Local offers something fresh for every taste.

Upon entering, the host stand welcomes guests in the main family-friendly dining room, complete with a long bar, windows and an open atmosphere. Just to the right, in the second of the three rooms, a smaller bar and lounge area with bar seating and limited table seating enjoys a hip-meets-Colonial-vibe with a low ceiling and centuries-old British ballast bricks on the floors and walls, all that invite guests 18 and over. The main “adult” dining room, just through the next doorway, features the same brick-and-beam decor, original art from area artists and a small stage for occasional soloists and duos, along with side rooms for smaller private parties. This, too, is available for 18 and over only seating.

“I love kids,” says Dabrowski, “and kids and their families are more than welcome in the largest of our dining rooms, but as a customer—and I know from experience—there’s nothing more annoying to me than going out for dinner or drinks and having to share the space with unruly or unhappy children. We wanted a safe space for adults who want to be with other adults.”

“We’re doing this the way we want to," he continues, "and that has to start with great, locally-sourced food.” Every item on the menu is as local as possible, starting with grass-fed beef from North Carolina; Geechie Boy grains from Edisto Island; pasta from Charleston; and seafood from Seven Seas in Murrells Inlet. “We only use local shrimp, oysters, crab and grouper,” says Dabrowski. “We also get some provisions from Lee’s Farmer’s Market.” The night I visited, I started with the crab cake. It was large, loaded with unpasteurized, hand-picked North Carolina Blue Crab, broiled to a golden perfection and served with a light remoulade.

“I think the crab cake will put us on the map,” says Dabrowski, “but people are raving about the duck as well.” My crab cake lived up to expectation, and would fall apart if you looked at it too long; it’s made with very little binder. My portion of duck leg quarter was moist and tender with a crispy, well-seasoned skin. The sides of sweet potato hash and creamed kale made the perfect accompaniment. I finished with peanut butter pie made with New South Nut Brown Ale, Buffalo Trace bourbon and peanut butter mousse enrobed in chocolate. With a glass of Argentinian Malbec, the meal was, in a word, “perfect.”

(Left) The 18+ bar area is the perfect spot for adults to relax with their favorite libation from an impressive list; (Right) Bird is the Word: Dig into the Crispy Duck Confit Leg, flash fried and served with the perfect accompaniments of sweet potato hash, creamed kale and a red chile sauce.

The menu is loaded with creative starters, such as candied bacon and nuts and skillet cornbread. Entrees include sandwiches, burgers, BBQ, fried chicken and the Cute Melt, made from lamb, veal and pork with extra sharp cheddar, peach steak glaze and onion straws. Brunch includes traditional egg favorites, chicken and waffle, country sausage and much more. Dinner runs the gamut from vegan dishes, including marinated tofu over rice noodles, as well as heartier fare, such as oysters, shrimp, grouper and short ribs. Rounding out the menu is a collection of desserts, including a made-to-order skillet cobbler and the peanut butter pie. A comprehensive wine, beer and spirits list ensure those seeking adult beverages will find their favorite.

In late 2018, the Dabrowskis raised $10,000 for victims of Hurricane Florence through an event at their home, and realized with a restaurant they could continue in charity work with even greater impact. “We want to create a community of giving,” says Dabrowski. “I pay my staff [twice the restaurant minimum wage], and within a year I hope to be offering them health insurance. It’s paramount that I take care of them and their families. I’ve been called a socialist, told I was going to fail, but the one thing I was called that I liked was ‘entrepreneurial activist.’ I’m going to change the game.”

Local is off to a great start. In just a few months, they are already exceeding the standards that savvy Pawleys Island diners have come to expect. 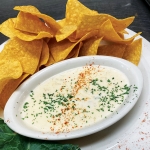 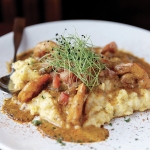 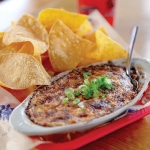