Down to a Science

December 2015
Written By:
Ashley Daniels
Photographs by:
Scott Smallin
The Chemist is stirring things up on the Myrtle Beach restaurant scene

Ihated chemistry in high school. The mundane, chemical symbols of all the elements, the bland sanitation of any artistic quality. But I did—and still do—love theatre and I always enjoy a good show.

At The Chemist, you’ll have front row seats to a really good show. The new experiment in downtown Myrtle Beach, near the old Pavilion, is another original dining venture by Larry and Fabiana Bond. Their first, ART Burger Sushi Bar, is only a couple of blocks away.

Chef Sean Thomas fuses the artistic and the scientific into palatable works of modern culinary art. He crafts them using molecular gastronomy, which uses techniques from chemistry and physics—all-natural processes, of course—in the kitchen.

The periodic table is the champion design element, from the black-and-white outdoor signage to the tabletops and lit coasters inside. Servers and bartenders don crisp, white lab coats. Teal LED lighting shoots up the bar and glows from inside drink menu stands at every table. Lighting is molecular-modern, including those fixtures that look like they were stripped from above a science lab table and now hang from the ceiling here by expandable springs. It’s all industrial and metro-sexy without trying too hard, like a Disney-themed restaurant would in a happy heartbeat.

Beyond The Chemist’s cool, cosmo surroundings, the real spotlight is on the cocktails and food. Start with one of the nearly 20 potent potables the bar mixes and pours from freshly made simple syrups, bitters and ingredients. My husband tried the Bourbon Flask, a Maker’s Mark combo of Luxardo cherries and fresh sour mix. It was one of the best bourbon blends he’s had, he said. I stuck to a less distilled drink of cold H2O, poured into glass beakers set on the table beside Petri dishes lined with thin lemon slices.

To be a server here doubles as a job title of scientific research assistant—not for the easy order, easy refill, smile and get-an-easy-tip sort of server. And ours was exceptional—informative, but not condescending; attentive, but not suffocating.

The menu? A one-sided sheet, but endless compounds to experience, held secure on a plastic clipboard. Start your experiment with a Hypothesis appetizer. We chose olives served on a black slate with toast points and Serrano ham. A variety of marinated olives bob in a clamped lid Mason jar. Two white ceramic spoons hold green olives that have undergone reverse spherification, a molecular gastronomy technique that involves submerging a flavored liquid with calcium content in a bath of sodium alginate. The result is an egg yolk shape with a gel-like texture, complete with a thin membrane. The flavors are intense, like three or four olives in a single bite. It was incredible!

We decided to sample two dishes off the Research course and, again, weren’t disappointed. First, a deconstructed Shepherd’s Pie, unlike one you’ll ever get at any Irish or British pub, layered with a foundation of crispy cornbread, followed by a layer of slow-cooked beef and finally topped with a light, creamy potato espuma smothered atop the “pie.” It was heartier and richer than I imagined this scientific version of a European classic to be.

Our next dish, Smoked Trout, arrived seared and still smoking from the smoke gun under a glass domed cover. When the cover was dramatically lifted, the trout was laid gracefully atop a bed of bamboo rice risotto and buttery-vinegar XO sauce and was garnished with shiitake mushrooms. Each and every bite was full of exquisite, balanced flavors. Cheers to the chef.
In Conclusion (that’s the dessert section title), we went with Liquid Nitrogen Truffles, a trio of dark chocolate pods stuffed with cheesecake cream traced with a trail of vanilla and sliced strawberries. Luscious and delicious, this was the perfect ending to our three-course experiment.

The Chemist is an experiment in itself, and one I hope—really hope—Myrtle Beach locals and tourists will want to get out and support. The concept, by design, is outside the typical and expected, and that’s OK. This is just an unscientific theory, but one I’d like to prove: I think a venue like this is promising for our area and offers a chance to think outside the box and to embrace our inner foodies. 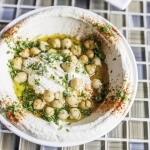 This kosher restaurant is making waves in Mediterranean cuisine 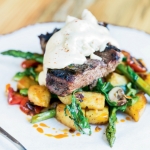