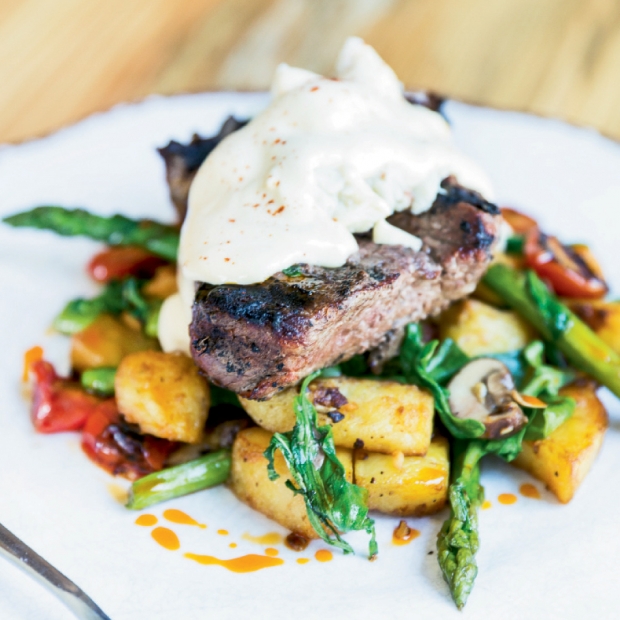 Just as Pawleys Island prides itself in being “arrogantly shabby,” one of its newest eateries can certainly be dubbed the place of “unpretentious polish.”

Rustic Table is the name and upscale comfort food is the game.

Co-owners Anne Hardee and Chef Adam Kirby are the team captains of Rustic Table, a mere “57 steps, door-to-door” from their well-established Bistro 217 restaurant. Kirby says the close proximity makes for easier management of two places simultaneously and that each is focused on a different cuisine and clientele.

To really get a taste for the culinary fusion served at Bistro 217, think French brassier with a drawl and mix in a pair of chopsticks. French training, Lowcountry upbringing, a stint in California and Asian travels all influenced Kirby’s 217 menu.

But at Rustic Table, Kirby comes back home to Mama, his Southern roots and keeping it real.

We were lucky enough to get a table on the frontage porch. A party of four ladies behind us placed their supper orders and then played out a hand of cards. A gentleman seated near the front door kept getting up to open it for the waitress when her hands were piled with dishes. In true Pawleys fashion, topsiders and flip-flops effortlessly mingled with Pradas and Wingtips—that easy island vibe with an undercurrent of old money.

Starting at the starters, we decided to share an appetizer and salad. Easy enough, you would think. But little did we know how difficult it would be to pick one!

The appetizer lineup called for lively debate in the company of Popcorn Gator with hot mustard sauce, Crispy Fried Chicken Livers to dip in spicy ketchup and a Southern Cheese Plate that included pickled Vidalia onions and pepper jelly.

We finally settled on skewers of Oyster en Brochette, crispy-finished and cornmeal crusted, then wrapped in hickory smoked bacon. I loved the skewer idea and the accompanying “Comeback” sauce was a savory sweet-and-hot recipe that Kirby borrowed from his mother. Thank you, Mom!

With the oysters, we tucked into the Rustic Table Caesar, a deconstructed version of the salad, served with whole grilled and slightly charred romaine hearts, chunks of shaved parmesan and an ample grilled crouton. The Caesar dressing was house-made, a lighter and brighter translation, and served on the side.

And I have to give a nod to the crusty rolls that come with supper, to be spread with either butter or a mash of cream and blue cheeses.

By this point, we could hardly wait to order our entrees.

I was disappointed to learn that they had already sold out of the Trout Almondine, but our waiter suggested that I could substitute Triggerfish. Done deal. And hubby went for the Fried Pork Chops, mumbling under his breath that he hoped they wouldn’t be overcooked and dry, like most fried chops he’s forced to suffer through. But at first bite, I could see the look of near rapture on his face and knew Rustic Table had nailed it. Did I mention that the breading is so outstanding that Kirby has a patent on it? Kirby calls it the “Rustic Table Blend,” a simple mixture, but hard to get just right.

Two moist and perfectly fried chops came with a heap of mashed potatoes and the house-signature “Sweet Tea Collards.” The collards deserve an award all on their own, a bittersweet celebration of Southern greens. And the “Jezebel Sauce” trumped traditional applesauce with its own magic mash-up of apple jelly, mustard and pineapple.

The Triggerfish was laid out over creamy mashed potatoes with a hint of lemon to them and toasted almonds, accompanied by a sauté of deep and earthy spinach and roasted cherry tomatoes. The pool of lemon-butter sauce on this dish was nothing short of heavenly, enlightened by touches of honey and apple cider vinegar, ingredients that Kirby describes as “things that you feel in your mouth.”

Although all entrees are served with at least two sides, Rustic Table offers diners the option to order more, a la carte, for $3 each. Besides the sweet tea collards, mashed potatoes and sautéed spinach and tomatoes, you can get a taste of bleu cheese stuffed red bliss potatoes or succotash at supper. For lunch, you can add in “Mom’s Potato Salad” or deviled eggs.

The only dishes that are consistent through both lunch and dinner are Rustic Table’s Signature Items: A cornmeal covered and fried flounder or oyster Po Boy, the brisket sandwich with homemade BBQ sauce, a two-patty Smash Burger slathered with roasted onion jam and “The Comfy,” featuring a fried chicken breast on a homemade biscuit and ladled over with sausage gravy.

A brunch menu is also a Rustic Table specialty, served only on the weekend and running the gamut from blueberry pancakes and eggs Benedict to country fried steak and an egg-battered Monte Cristo.

I ain’t lyin’ when I tell you that if you want Lowcountry cooking, done right with heaping scoops of Mama’s love and Kirby’s inspiration, get to Rustic Table! 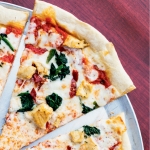 Capriccio serves specialties like your mama used to make 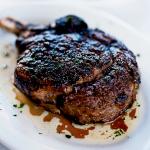